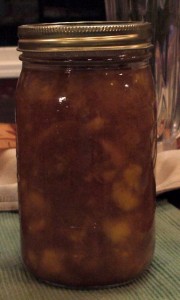 I spent the day canning pears and peaches. The peaches were for my sister, Misty. She had a peach tree last year that would not quit, and when I was visiting this past weekend, she sent me home with seven gallons of frozen chopped peaches, with the only request that some of the preserves made be jelly because she doesn’t like chunks on her toast.

After making 6 pints of jelly (for her) and 6 pints of preserves (chunky for me), I had 2 gallons left and decided to make her some peach pie filling. She is a busy, working woman with a hectic schedule. I thought that maybe having a lot of the work already done for her would encourage her to treat herself to a couple of homemade pies over the winter.

Sterilize the jars by boiling them for 20 minutes.

Mix all ingredients in a large saucepan. Bring to a rolling boil (that is, it doesn’t stop boiling when you stir it) stirring quite often – almost constantly. Keep in mind that the sugar will burn if it isn’t stirred almost continually.

Once it boils, boil and stir for two minutes. The sauce is going to thicken as it boils. Remove from heat.

Process in a boiling water bath for 30 minutes.

To bake into a pie:

Prepare 2-crust pie crust according to the recipe.

Line 9-inch pie plate with bottom crust. Fill with 1-quart of pie filling. Cover with top crust (fluted to allow steam to vent). Fold edges of crust under and seal. Cover the edge with foil to prevent burning.

Bake for 30 minutes then remove the foil. Continue baking 10-15 minutes or until the crust is lightly browned and the delicious juices are bubbling up through the slits in the top crust.