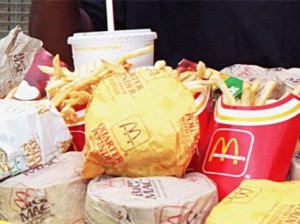 Gregg and I watched Food, Inc., last week.  The facts presented were interesting, but, honestly, it was just ridiculous how they twisted things with the intent of eliciting an emotional response.  The facts as facts were enough to get the point across without the added exaggeration element.  But, I guess that’s how “documentaries” are presented.

One part that sticks out to me was titled, “The Dollar Menu.”

The scene opens with a man ordering five $1 cheeseburgers, two $1 chicken sandwiches, two $1 Sprites, and one $1.60 Dr. Pepper, for a total of $10.60.  This is a family of 4 who say that they can’t afford to purchase “real food”.  If they only have $1 per person [which isn’t true – they spent, before tax, $2.65 per person; and consider that fast food is taxed where fresh food (in most states) is not taxed] then they can’t afford things like fresh broccoli.  They made a big show of weighing what $1 worth of broccoli would be, and how that would not feed one of them.

The father has diabetes, and his medicine costs over $200 per month to purchase.  Because of the cost of his medicine, they had to purchase their meals from the dollar menu of a fast food restaurant, where he eats white bread (starch = sugar in the blood), unhealthy fatty meat, fried meat, and drinks a soda (more sugar).

It was all very dramatic with the family standing there letting the silence speak for them.

I feel like finding out the name of these people and sending them $5 Dinners cookbook.  But even without a cookbook, it is extremely easy to feed a family of 4 on $10 for one meal.

Just off of the top of my head, I think of a package of chicken thighs ($4 would easily EASILY feed 4 people), a package of brown rice (a $2 package would make 12 cups of cooked rice), and a package of fresh-frozen broccoli ($2).  That still leaves me with $2 to purchase a half gallon of milk instead of the high fructose corn syrup laden soda.

I could probably sit here and come up with HUNDREDS of meals made with real food that cost less than $10 to make.  I could come up with hundreds more meals that don’t have the starch or sugar content that fast food does, which would help the dad’s diabetes, which would ease the family’s medical costs.

I feel very frustrated with the way this was presented.  My heart breaks for people who feel like they don’t have any other option.  I feel angry that Burger King’s dollar menu is the default for people with a small food budget, and that this documentary – which reached so many people – exploited such ignorance as if there really is no other option.

A quote from the movie that I loved was:

I’ve had people come up to me at the farmers market, you know, and say, “What? Three dollars a dozen for eggs?”  And they’re drinking a 75 cent can of soda.  ~Joel Salatin, Polyface Farms 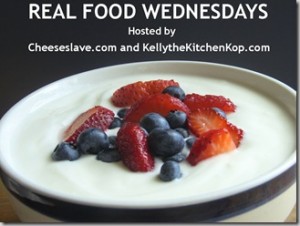