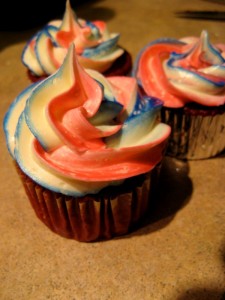 I had to make cheesecake for 40+ people and mentioned on my Menu Monday that I was looking for a recipe that I could use to make the cheesecake because I only have 2 cheesecake pans.  One of my awesome readers, Kim, commented and asked if I had considered making cream cheese cupcakes.  She then emailed me the recipe.  I made 6 dozen of them last night, and they were a HUGE hit.  The cheesecake just melted in our mouths.  Kim gave me permission to post the recipe.  I’m just sad I didn’t take any pictures – but I was working pretty hard and it didn’t occur to me.  Our menu rotates every 6 weeks, though, so I’ll be making them again soon!

Beat together cream cheese, ¼ cup of sugar, 1¼ tsp vanilla, and eggs.  (NOTE: The original recipe sent to me by Kim did not have sugar in the cream cheese base.  I don’t know if that was intentionally left out or an error in transcribing the recipe, so to play it “safe”, I put in a little bit of sugar.  I tasted it before and after, and liked the taste of it better with the small amount of sugar.)

Bake at 300° degrees F for 45 minutes.  (NOTE:  I used a commercial convection oven and cooked them for about 15 minutes – so I don’t have any experience with cooking them in a regular oven.  I trust Kim’s timing, though.)  They will not brown, but they should puff up.

Remove from the oven, but leave the oven on.  Let them cool for 5 minutes.

While the cupcakes cool, they should form a hole in the top.  Mine did not, but I cooked them quickly in a convection oven and I also added sugar to base recipe.  Either of those things could affect what happened.  The recipe I have says fill the hole with the sour cream topping – I just put a dallop on top and spread it around.

Return to the oven and bake 5 minutes more.