Moroccan Menu on the Fly

I had some friends over for dinner last night. I’m not as good at entertaining people as my husband is. I’m much better at cooking and serving a meal while I listen to him entertaining and interacting with people (heh). But cooking for people is what I love to do, and even though he’s gone, he encourages me to still have people over.

I chose a simple meal that I wouldn’t be frantically trying to finish when they got here. I’d planned on making ground lamb with taziki sauce in pita pockets, grape leaves (purchased pre-made), homemade hummus, and Greek salad with pumpkin cheesecake for dessert.

I laid the ground lamb out to defrost and decided against adding some seasoned chicken to the options. I always cook too much food and the lamb would be plenty. After I made the cheesecake, I spent the morning cleaning my house. After the boys woke up from their nap, I went to the grocery store to get the grape leaves. The olive bar was gone from the store, so I went to the deli and found out that they don’t offer anything like that anymore. (As an aside, that is very sad. The grape leaves on this olive bar were amazing. I often had them for lunch.) By now it was nearly four, so I decided that I probably had time to make some from scratch, so I bought grape leaves.

I came home and went to my pantry and the cans of chick peas that I had in there were gone! I looked everywhere (I have a large pantry that is sorted by veggies, beans, etc.) Nothing. I know I had two cans. By now it was after four and I didn’t have grape leaves or hummus. So I grabbed a Mediterranean cookbook and looked up what I could do with ground lamb that would take less than two hours to make, and that I had the ingredients on hand. 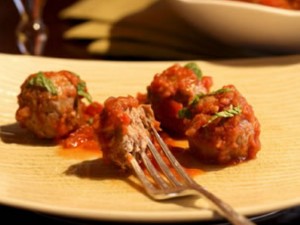 We moved from a Greek inspired menu to a Moroccan menu. Here’s what I came up with. The recipes are following this post, or linked below:

Despite the fact that it was 4:30 before I had a dinner plan, dinner was ready by 6:10 and went off without a hitch. Although, I’m still really hungry for hummus!