End of the Year Update

For those of you who have been following along in our journey with our son Scott, you’ll know that we placed him in public school in September — a month after school started.  (You can weed through the posts I tagged with Scott here.) He was been diagnosed with Pervasive Development Disorder (Not Otherwise Specified) also known as PDD (NOS).  Despite the fact that he does not have autism, this year, PDD (NOS) was placed under the autism “umbrella” and technically falls into that spectrum.  The only way that affects us is as far as funding for his school goes, and it’s a positive there.

Every morning, I had to help Scott through a meltdown that was so heart wrenching that I don’t know how we got through to the end of the year without me just pulling him out of school and homeschooling him.  He would sit there, bit fat tears streaming down his face, hiding his face from me so that “no one could see him” and just say, “I just don’t think I can keep doing this.”

Every day, I’d receive reports from class about issues, outbursts, non-participation, non-cooperation, etc.  Finally, on April 26th, I got an email from the teacher that said:

I have really seen a lack of effort the last few weeks. He is having to redo work, and have an teacher sit individually with him to make him finish. I am concerned about first grade because there are no assistants to take time way from the other students to make him work. I foresee him getting into more trouble as the quantity of work increases. I am having a difficulty testing him as well. I simply can’t tell if he’s struggling in math and reading now, or if he doesn’t care to answer my questions correctly.

I was really upset about this email, because Scott turns 7 in July.  We purposefully red-shirted him and started him in Kindergarten when was already 6.  What I read when I read this was that they were considering retention.  I said something to a friend who has a middle schooler with Asperger’s Syndrome, and she said, “Call an ARC meeting.”

It never occurred to me that I needed to call an ARC meeting (this is the definition of an ARC meeting) to arrange for an IEP (individual education plan) for first grade.  So, I immediately contacted the woman in our county who does things like that for Scott’s school, and a week later we had a meeting with his teacher, special ed teacher, occupational therapist, etc. (And, if you have a kid with an IEP, call for an ARC meeting now before the beginning of next year — you SHOULD do it every year, and they’re not going to tell you you need to.) 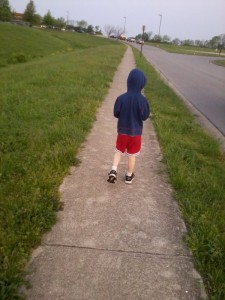 In between that email and the ARC meeting, something happened.  The freezing temperatures went away and the ice melted.  One morning, I walked Scott to school.  It is, according to the GPS on my phone, exactly one mile from my front door to his classroom.  That day, the teacher wrote on his progress report, “Good day!”  The next day, I almost had to drag Scott to school, he actually pulled against my hand and dragged the heels of his feet trying to keep from walking to school.  But, halfway there, he perked up and eased up on the resistance, saw a headless rabbit on the side of the road which absolutely fascinated him (of course — he’s a 6-year-old boy) and the walk to school became exciting.  Again, the report said, “Good day!”

The day after that, I had to drive him because it was really cold and rainy.  The report that day was not good.  A pattern was emerging.

Now, we walk rain or shine.  It takes us 25 minutes to walk when I don’t have to drag him, and 20 minutes if he’s really keeping up a good pace and not trying to stop and look at something along the way.  I give us a 35-minute window in case we see another headless rabbit or something.

It’s been 3 weeks since that email and two weeks since the ARC meeting.  Retention was discussed but dismissed, because Scott is SO SMART, and the standardized testing scores that came in the mail right before the meeting showed him to be “high average” in testing.  The special ed teacher at the meeting said that his scores would have been much higher if he’d tested on one of his cooperating days, because she administered him his test and knows what he knows and what he was just unwilling to show.  At the meeting, we developed a plan for next year that includes walking despite any inclement weather (we will be investing in rain coats and rain boots!).

In the meantime, Scott looks forward to the walk every morning.  He’s keeping track of how many “cool things” we see along the way.  He carries a compass with him and monitors what direction we’re walking.  I no longer have to hold his hand and drag him half the way.  And the best part is, last night before bed, he said, “Mom, I love school now.”

Yesterday, he received his promotion certificate.  He is now “officially” in the first grade.

More than likely, homeschooling will be back in our radar in the future.  But, for now, we’ll keep him where he is while I continue to learn from trained special education teachers how to teach Scott.  I’ve already learned so much this year from the occupational therapist and the special ed teachers, and I realize in hindsight how unequipped I was to homeschool him.