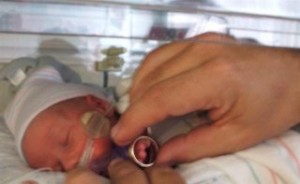 When I was pregnant with my son, Scott, I was involved very actively with a message board comprised of women all due in September with me.  I was due September 21st.  It was called “The September Due Date Club.”  I remember at some point during the 40-odd-weeks of pregnant talk some women wanting to be induced early so that they would make sure to make the school cut-off date for their area for entrance into kindergarten.  I remember being kind of appalled at the idea.

I’ve kept in touch with MANY of these women on Facebook.  Now that all of our “September Babies” are turning five (despite Scott being born in July, he is still one of the “September Babies”) I’ve noticed a major tendency to discuss redshirting the kids.

Apparently, the term redshirting is some sports metaphor when they would put a redshirt on a JV and let him play with the Varsity team but the Varsity players were not to hit the kid.   The result is that the redshirted younger players had an unfair advantage.  They redshirt quarterbacks at practices today.   [And additional definition from my dad:  “Red shirting” as it is understood in sports today is having a player practice but not play, retaining a year of eligibility. So the expression “red shirt freshman” would be an academic sophmore who was red shirted the previous year.]  Redshirting in this context is holding your school-aged child back an extra year, and starting them in kindergarten at the age of 6 (or first grade at the age of 7).

When Scott was born at 30 weeks, Gregg and I agreed long before he even started crawling that he would not start school at the age of 5.  He had so much physical catching up to do, we had no idea what the mental ramifications of his preeminess would be, and we were already bent on “he wasn’t due until the end of September, so we likely wouldn’t have started him in kindergarten anyway.”  The closer we got to this summer, the more we felt like redshirting Scott would be the best decision.  So, even though I’m homeschooling and the social aspects of school won’t affect him, we will be starting a full time preschool curriculum this year and not a kindergarten curriculum.

You hear all the time that “boys mature slower than girls.”  This is really not true, per say.  The difference, according to National Institutes of Health in Bethesda, Maryland, is that boys and girls brains develop in different sequences (to read the results of the study, click here).  The order and trajectory of brain development is different between boys and girls.  And, typically, public elementary schools are geared toward girls and the way girls learn.

According to Parents magazine:

Statistically, they’re [boys] at least four times more likely to be expelled from preschool than girls, and they’re twice as likely to be diagnosed with a learning disability or to be held back at some point during their education. Girls rule in today’s classroom. On average, they have outperformed boys in standardized reading and writing tests for years and have recently caught up to boys in math and edged ahead in science. Indeed, the gender achievement gap grows over time. Boys lag in almost every subject by middle school and are four times as likely as girls to drop out by high school. Now, more than 58 percent of all U.S. college students are women, who obtain the majority of associate’s, bachelor’s, and master’s degrees.

Why are boys being left behind? In part, it’s because they start out at a disadvantage. “Three out of every four boys in a typical kindergarten class are more physically active and developmentally immature than the girls are,” says Parentsadvisor Michael Thompson, Ph.D., coauthor of It’s a Boy! But schools (including many preschools, which have shifted their emphasis to academics rather than teaching social skills) may require students to quietly complete worksheets rather than let them run around and play. This trend has made the classroom a far less friendly place for boys.

My brother-in-law is a high school math teacher.  He’s been a high school math teacher for longer than I’ve been a parent.  His son was born two weeks after Scott, and they’re redshirting him.  He told us that he sees the difference in boys’ math scores between the older and younger boys, and the difference is major enough often enough for him to be a proponent of boys being older when they enter school. 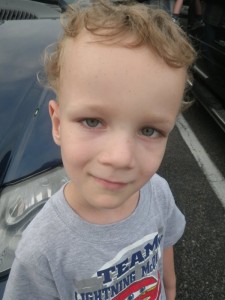 One of my best friends has a son who turned 5 two days after Scott.  She and her husband are high school and middle school science teachers, and both of them believe that holding their son back will do nothing but benefit his academic future.

As my friends have discussed whether their not-quite-5-year-olds will enter kindergarten this fall, I have been surprised at the number of mothers (of both boys and girls) who have decided to not do so.  I realize that the controversy that tends to surround redshirting doesn’t exist as much in our group, because most of the babies born were born in September – so it’s not like we’re holding boys back who were born in and turned 5 in January.  But after so much conversation five years ago about school cut off dates versus due dates, it’s interesting to see the shift now that we all know our children and how our children learn and behave.

Despite how smart Scott is (and he is smart – his pediatrician has labeled him “scary smart” – haha) Gregg and I both know that he will do nothing but benefit from waiting to begin a kindergarten curriculum.  Even though he’ll be learning at home in an environment that will accommodate his naturally ingrained desire to move and run regularly through the day, we just believe that waiting until he’s older to start a more academically focused course of study will give him the best intellectual advantage we can give him.