In the Right Place at God’s Time 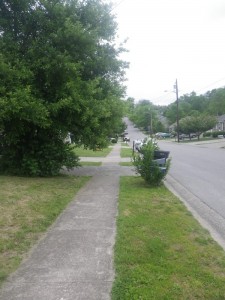 Leaving for church last night, as I started down my street, I saw two little girls and a little toddler boy walking up the sidewalk. Something about them wasn’t right. They looked wrong. So, I stopped the car and rolled the window down. They were right in front of my house at that point and I was two doors down. One of the girls turned toward my car and started toward me. I got out of the car and said, “Are you okay?”

She said, “I can’t wake up my daddy, and we’re looking for Kendall’s house. She lives here somewhere.”

This girl and her twin sister were 5, and their brother was 2 — a young 2. She told me they lived way down at the end of my road (the picture to the right was taken from my house looking down the road — they lived at the END of my street). She said they’d pushed on their dad and shook him and shone a flashlight in his face, but he wouldn’t wake up. She said, “He does that all the time and I don’t like it.”

So, instead of risking an unknown situation, I called the police. My next door neighbor came out with me while I was dialing the phone. She didn’t know the kids either. We asked where their mom was. She said, “She lives with the loser Eric.”

The sister said, “We live with our Nana. We’re just coming by daddy’s house for a minute, but he won’t wake up.” Apparently, this Kendall person is a friend of their dad’s, and they thought they would be able to find her house to have her help them wake her up. 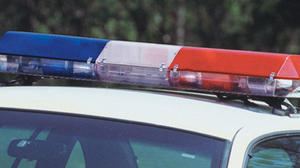 The police came quickly and dispatched a team to the dad’s house. He was on something and totally unresponsive. The girls started panicking then, worried that they’d done something wrong by talking to me, a stranger. Worse yet, a stranger who drove by in a car and rolled down her window.  But, thankfully, by then the police officer was back and he talked them through it. I have no idea what they did with the father — I didn’t ask. They called the kids’ grandmother and she came to get them.

Here’s the thing: Earlier in the day, I was at the church cooking for a banquet tonight when someone called to arrange to pick up something from me. I was so annoyed that I had to pack up and go home with the boys right in the middle of everything I was doing. The people got lost getting to my house, and I had to talk them through getting to me, all the while looking at the clock and thinking of everything else I needed to do.  I met the people at my house, they stayed longer than I wanted, and then left. I hustled the boys back out the door, and was rushing away when I saw those little kids.

I feel a little contrite being so annoyed at being “inconvenienced” the way I was when I had to go home. CLEARLY God was placing me in these kids’ paths. I am thankful He used me and hope I’m more patient the next time my schedule is shifted.

We were way late for church, but all of the things I had to do (and still need to do) became the least important things in the world.

This is a sad, fallen world, and my heart is broken for those babies.