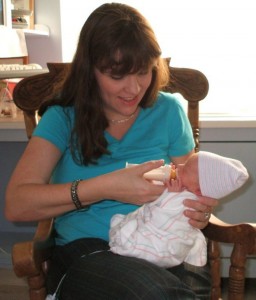 When Scott was an infant, we had to feed him a bottle twice a day, so that we could give him a shot of vitamins and a dose of human milk fortifier.  Since he was just 3 lbs. 5 oz. when he was born, the extra 10 calories in the human milk fortifier were supposed to really help boost his weight gain.  And, the vitamins were, obviously, to increase his vitamin intake.

It smelled awful – like uber, concentrated, non-fancied-up vitamins.  It was this little bottle with this gray-brown liquid in it that came with an eye-dropper, and we had to mix it with like an ounce of breast milk.  He was a trooper, though, and swallowed every drop.  After a while, his burps would smell like those awful vitamins.

The other day, I mis-swallowed a multi-vitamin out of my vitamin pack and after coughing it up and reswallowing it, the taste was in my mouth.  The taste transported me back to over 6 years ago, to giving my preemie son that bottle of vitamins twice a day.  I was so transported that I almost expected to hear him crying from the other room.

I KNOW he is a miracle among miracles.  I KNOW the fact that he can see, hear, comprehend — those are miracles.

After being open about some issues with him and the problems we’ve had with schools, and the process we’ve gone through and such, I get a lot of inquiries from family, friends, and readers about how he’s doing.

He was diagnosed with Pervasive Development Disorder (PDD), but despite a recent addition to that disorder onto the autism spectrum, his psychiatrist and his pediatrician both emphatically believe he does not have autism.  He is in kindergarten in a public school.  His teacher has two full time aids and a special ed teacher who works strictly with kindergarten and spends a lot of time in his room.  There are 26 kids in his class.

Every single day, Scott wants it to be the last day of school.  They did not have school on election day (in November), and the next day I woke him up to get ready for school.  He got out of his bed and started to get dressed and said, “Where are we going?”

He released a heavy, pent-up sigh and his shoulders slumped forward.  He sat on the edge of his bed and buried his face in his hands and said, “I don’t know how much longer I can keep doing this.”

I battled every single mama-bear instinct inside of me and took him to school that day.

We completed the IEP process right before the Christmas break.  His school is amazing.  His teachers  are amazing.  They LOVE him and work with him.  He sees an occupational therapist at the school who works with him to help teach him coping skills for his sensitivity to stimulation.  A speech therapist pops in to talk with him regularly.

He has started to name children’s names at school, to claim a friend.  This is a big thing – a huge deal.  He told me he wants to play T-Ball – which we don’t know if we’ll let him yet or not (he doesn’t follow the kind of rules that a sport would require and wouldn’t understand the whole team concept — he also wouldn’t really be able to handle any noises from crowds or whistles from umpires or buzzers on clocks or anything like that).  He participated in an assembly recently, that had him singing and waving his hands.  This is MAJOR that he participated instead of covering his ears and trying to get away from the noise.  He hasn’t had a meltdown in several weeks (I had accidentally put Jeb’s lunchbox in his backpack and didn’t realize it until I dropped Jeb off.  I got there to switch boxes within a 30-minute window, and found him in his empty classroom – the other kids had gone to breakfast – and his teacher had her arms wrapped around him trying to help him come out of the meltdown.  As soon as he saw his lunchbox, he recovered quickly.)

But, he sits completely quiet in class, without participating in group discussions.  He is unanimated and uninvolved.  I think he’s sitting there, waiting for the seconds of the clock to tick by and the school day to be over.  There are some discipline issues, but his teachers have a great system and he responds well to it.  They are well trained in performance-for-reward-style of teaching which is how he works best.

We got his report card yesterday.  With 4’s being the highest and 1’s being the lowest, most academics had 4’s and most social skills had 1’s.  Despite the daunting numbers, we know he’s improved.

He had the flu last week and was home the entire week.  On Friday, his fever was gone, and when I told him, he said, “No!  I still have a fever!  I can’t go to school anymore!”  It’s stressful for him to go, and it’s stressful for me to send him, but the improvements in him are so amazing that I can’t deny that this was the right choice for him.

Tasting those vitamins and being transported so suddenly back in time, remembering how tiny he was, and how little hope the NICU staff gave us for his future, being reminded about what a miracle he is, makes seeing those 1’s on that report card a little easier despite my initial emotional reaction to them.  I believe God has big plans for that boy, and He isn’t going to abandon him now.