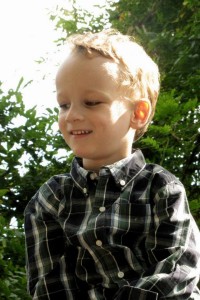 Our son Scott is a remarkable boy.  He is an absolute joy, a miracle from God, who survived coming into the world 10 weeks early, weighing just 3 lbs. 5 oz. at birth, but thriving despite all the odds stacked against him.  Now 5 years old, he remembers everything in shocking detail and draws correlations and analogies between things and concepts you couldn’t imagine a 5-year-old would possibly comprehend.

But, there is something outside of the realm of “normal” about him.

He has many obsessive compulsive tendencies.  He must get dressed in the exact same order every day, and get undressed in the opposite order from which he dressed.  He loves character toys and has sets from all different movies and shows from Tangled to Little Einsteins.  While watching a movie or a show, he needs the characters of that movie or show lined up on the table in front of him, and he touches them the entire time the show is on, fiddling with them while he perfectly recites the dialogue he memorized the first time he saw it.

He is extremely loving and needs to touch constantly, sitting in your lap or affectionately touching your face when he’s talking to you.  He can’t handle loud noises and even in his sleep will cover his ears when something is too loud.  In a loud crowd, he wants to remove himself, separate from the cacophony around him.  He wanders away constantly, without realizing he’s doing it.  When he’s overwhelmed, he will lay down on the floor and rub his head back and forth.

I could go on.  The point is, there things just keep manifesting.  And Scott was getting worse.

This was one of the reasons Gregg pushed up his return home by several months.  When Gregg was home on leave in July, Scott’s behavior was immensely better.  Gregg is exceedingly patient and loving with Scott, and Scott is occasionally willing to try things – like putting his socks on after his pants – if Gregg is the one working with him, loving him, helping him cope.

Scott’s godmother is a special education teacher in another state.  She visited this summer and within a few minutes with Scott pointed out to me half a dozen red flags that signal autism.  She encouraged me to have him screened.  Additionally, I have a few friends who have children with forms of autism who are encouraging us to have Scott screened.  Then, last week, his teacher told me that she thought she observed some other-than-normal tendencies in his behavior and recommended we get him screened.

Gregg and I have been discussing it and praying about it.  What we want is the best thing for Scott.  Period.  So, we’ve been doing a lot of research.  In our research, we’ve watched some documentaries that were incredibly revealing – Generation RX being one that revealed in some detail just how very corrupt the FDA and PhRMA are and how over-medicated children are today and it was just appalling.  A documentary entitled  Loving Lampposts really — really — not only encouraged us but kind of made us feel like he did not need screening after all.  As we talked about it and continued to pray about it and tossed around what we should and should not do, Gregg met a new work colleague.

This gentleman has a 10-year-old son who was born 11 weeks early.  As Gregg spoke to him, and they started talking about their sons, it sounded like they were talking about the same child.  This man has never had his son screened for anything.  He excels at everything he does, and tackles monumental challenges for the sole purpose of tackling them.  The two men discussed different outside “diagnoses” by well-meaning teachers, family, and friends and this gentleman said, “Maybe he does have autism or Asbergers.  Or maybe he’s just exceptional.  What he doesn’t have is a label.”

That really got Gregg thinking.  Then he saw this in a presentation:

Everyone in the world recognizes this logo:

What you may not have ever seen, however, is that between the E and the X in the really lovely negative space is a subliminal message – an arrow that is intended to convey forward moving which I have highlighted here in yellow.

Now that you know the arrow is there, every time you see that logo from today until the end of time, you will see that arrow.  It’s the same as when you buy a new car and suddenly everyone on the road seems to be driving the same car.  It has to do with our perceptions.  In the FedEx logo, the arrow has always — always — been there.  It wasn’t hidden.  It wasn’t even accidentally placed there.  You just never looked for it before the way you will now.

A diagnosis in a child works the same way.  Let’s say we get Scott screened and he’s diagnosed with “High Functioning Aspergers” or “Autism Spectrum” or something similar.  Now, all through the rest of his school years, that will be his label to every single one of his teachers.  No matter what he’s doing or how he’s performing, when they look at him the first thing they’re going to see is that arrow.  They will, perhaps unintentionally, but inevitably, ignore the lovely symmetry of the rest of the message that is our son.

Understand that this is what we have come to after months of discussion, research, and prayer.  It is what works for us.  It may not be the universal solution for every situation.  For example, I have a friend whose daughter needed that diagnosis.  She needed psychiatric care, medication, counselors in schools armed with an IEP, and the facilities and learning aids offered by the special education department in her school.  Through the years since she’s been diagnosed and they’ve known exactly how to better help her, everything about her has improved and she’s now excelling in school.  It’s wonderful.

But, for us,  we’ve decided at this time not to seek screening for Scott and rally for a “diagnosis” that would ultimately inhibit his potential.  Within his current parameters, he functions fine.  Concrete things like letters, reading, math, puzzles, and fine motor skills come ridiculously easy to him because he is, as his doctor says, hyper-intelligent.  And while his is behind other children is some social skills, he doesn’t have the rages that some of my friends’ children have.  He doesn’t have attention problems that other friends’ children have.  He functions within his environment very well, and outside of it moderately well.  For now, that will work for us.

Like I said, we want what is best for Scott.  In the future, we may change our minds.  But for now, we’re just going to keep working with him and helping him cope with the outside world, without an arrow on this chest.