Kaylee and Scott have weekly horseback riding lessons.  Kaylee is learning how to jump.  This requires her to get into a position called a “two-point”.  A two-point is the position a rider gets in as she approaches a jump.  The rider leans forward, rear end off of the saddle, and all of her weight is on the feet in the stirrups – it’s almost a crouch in the saddle.

On Monday, Kaylee has softball conditioning for two hours and Tuesdays are horseback riding lessons.  This past Monday she really worked out at softball conditioning.  She was worn out Monday night.  Tuesday morning she could barely move.  Tuesday afternoon, I got a text from her that said that she was so sore she couldn’t walk.  I texted her back and said that she still needed to go to horseback riding lessons and at least try.  My thought was that her muscles would warm up once she was on the horse.

She wrote back and said she could barely sit down, how could she sit in the saddle?  I told her she’d be using different muscles.

When I picked her up, she was angry and pouty, but didn’t argue.  We got to the lessons and she limped to the stool to mount her horse and had to try twice to get her foot up.  I almost said she could skip the lesson, but I held my tongue only because Kaylee can be prone to drama.  Once she started riding, every time she rounded the ring, she glared at me.

Until now, she was just jumping poles lying on the ground.  Tuesday, the instructor set the poles on posts and had her actually jump them.  Once she and the horse were warmed up, she got into the two-point and jumped her first real “fence”.  She went around and around the ring, jumping over and over again without complaining.  Every time she had to get into the two-point, her muscles screamed in agony, but she held the position until the jump was over.

Her instructor and I noticed she was crying about the same time.  She stopped her and said, “What’s wrong?”

The instructor called an end to the lessons and let Kaylee go sit down instead of her normal post-riding brush down and taking care of the horse and the tack.  I was able to snap a picture of her last jump. 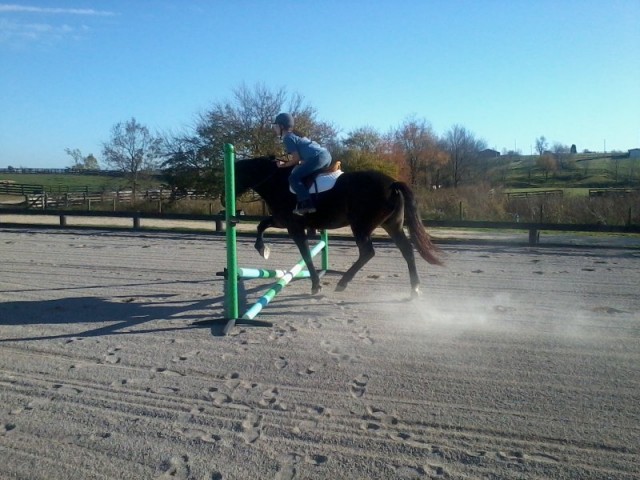 Her form isn’t perfect, but I am so proud of her.  It isn’t easy to go forward and do without complaining, especially when in pain, and even more especially when you’re a 14-year-old girl who has little experience with pain.  But she did it, for almost 40 minutes, and she did it well.  You can see the pain in her face. 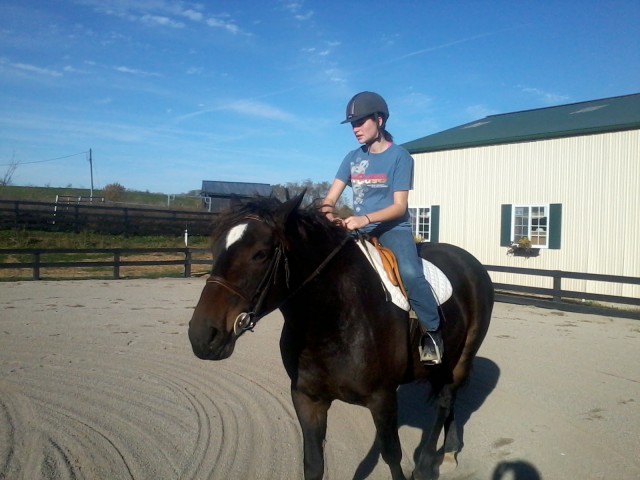 She’s an amazing athlete – both on the softball field and in the saddle.  Her endurance on Tuesday really impressed me.  When we were leaving, she tearfully apologized for glaring at me, which made me all the more proud of her.

And for those of you worried, she’s moving a lot easier this morning (the day after).  Her muscles are young and are recovering – ready for another hard workout for softball on Thursday.