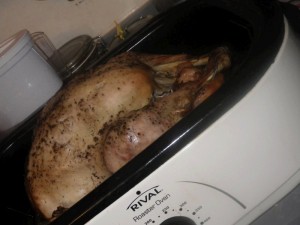 A few weeks ago, my local Kroger had organic, free-range turkeys for $0.44 cents per pound.  That meant that I paid $7 and change for a turkey that would have cost me about $40.  Of course, I bought as many as I thought I had room to freeze them, came home, arranged my freezer, then called Gregg and told him how many more would fit.  (Thankfully, the half of a grass-fed steer we purchased last year was just about gone, or we wouldn’t have been able to buy as many as we did.)

Consequently, I cook a whole turkey about once a week, or once every two weeks.  I just roast it in my roaster, and then make meals and soups with the rest.  (Speaking of which, I froze the carcass and broth from this week’s so that I could make soup from it this weekend.  I need to not forget about that.)

I’d roasted a turkey on a Monday.  A few days later, I was up to my eyeballs in edits for my current novel and lost track of time.  I ended up trying to come up with something “quick and easy” for dinner, using leftover turkey meat.  The problem with that is that I don’t have anything pre-prepared.  So, anything I made would need to be MADE.  I don’t even think I had any bread so that I could make something like open faced sandwiches.

Then I remembered that there was some easy Bisquick recipe my mom used to make.  I searched everywhere, but could not find my Bisquick cookbook (I have about 200 cookbooks).  So, I called my mom.  She read the recipe out loud to me:

Not really my speed.

So, I started thinking…I had frozen peas, fresh green beans, fresh carrots.  I sliced the carrots then tossed those veggies together and started steaming them.

Then, I melted 3 TBS butter, added 3 TBS (fresh ground whole wheat) flour, whisked until it was smooth, then whisked in ½ cup (homemade) turkey broth and ½ cup evaporated milk.  I lightly salted it and added some fresh ground pepper.  This took, literally, less than 5 minutes.

I drained the veggies and added them to the white sauce, along with the cooked turkey I had leftover (I probably used more than 1 cup.)

That took care of the “cream of chicken soup”.  Now to contend with the Bisquick. 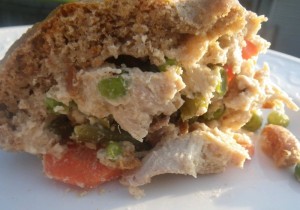 I figured I’d just make half of a recipe of Ma-Maw Lucille’s Buttermilk Biscuits, then add an egg to it.

That worked perfectly.  I had all of the elements made for the pie in less than 10 minutes.

I put the turkey mixture into a pie plate, topped it with the biscuit mixture, and baked it at 400° F for about 30 minutes.

My family loved it.  The five of us ate the entire pie at one dinner.

As I’ve said before, don’t think that “real food” means “inconvenient” food.  This meal was made FAST, EASY, and took no special items — just things I had in my pantry and freezer.

I wrote this out in “recipe” format.  You can find it here:  Quick & Easy Turkey Pot Pie