Question number 5 in the creation.com Question Evolution campaign is, “How did new biochemical pathways, which involve multiple enzymes working together in sequence, originate?”

It isn’t an argument from ignorance.  In fact, it should be a very easy question for Darwinists to answer if evolutionary biology is based on actual science. How did new biochemical pathways, which involve multiple enzymes working together in sequence, originate?

According to the folks at creation.com, the famous communist British Darwinist J.B.S. Haldane claimed all the way back in 1949 that evolution could never produce ‘various mechanisms, such as the wheel and magnet, which would be useless till fairly perfect.’ (Dewar, D., Davies, L.M. and Haldane, J.B.S., 1949. Is Evolution a Myth? A Debate between D. Dewar and L.M. Davies vs. J.B.S. Haldane, Watts & Co. Ltd / Paternoster Press, London, p. 90.)

Therefore molecular machines in organisms — such as the ATP synthase enzyme or the bacterial flagellum — would prove Darwinian evolution false according to Heldane. Molecular motors such as these do indeed fulfilled one of Haldane’s criteria. Did you know that turtles and monarch butterflies use magnetic sensors for navigation? They are examples that fulfill Haldane’s other criterion. Do you suppose he would have had a change of heart if he had been alive to understand these discoveries. Many Darwinists rule out any kind of intelligent design a priori, so the evidence, overwhelming as it is, would probably have no effect on that closed mind.

The truth is that every pathway and nano-machine relies upon multiple protein/enzyme components in order to work. How did lucky accidents create even one of the components, let alone 10 or 20 or 30+ all at the same time, and in highly specific and specifically complex necessary programmed sequence like a team of contractors following plans and a blue print? Darwinist evolutionary biochemist Franklin Harold wrote, “we must concede that there are presently no detailed Darwinian accounts of the evolution of any biochemical or cellular system, only a variety of wishful speculations.” 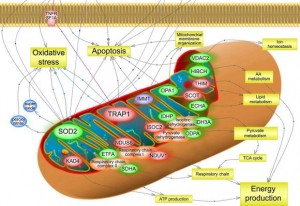 See, science is a systematized methodology of investigation that relies on observation, testing, experimentation, and evidence.  It almost never relies on wishful speculations.  Wishful speculations fall more in the realm of philosophy.  Or, you know, religion.

Certain biochemical pathways, such as the clotting of blood or the growth of a human fetus, are irreducibly complex, to borrow a phrase from intelligent design theorists. It is quite plain that biochemical pathways must have come into being all at once as a complete system. In other words, they are designed systems. It is quite obvious that systems this perfectly engineered and specifically complex could not have developed via chance random procesess one little part at a time as would be absolutely necessary with the Darwinian model of evolution.

Even staunch Darwinists admit there is no doubt that certain aspects of living organisms are extremely complex, and the individual parts fit together in a seamless whole that leaves absolutely no vestigial waste in its wake as randomness and chance would leave behind. However, Darwinists countered every example of an irreducibly complex system advanced in recent years, providing far fetched and perfectly implausible explanations of how designed systems could have developed gradually through the mysterious workings of magical evolution. In other words — wishful speculations.

Of course they do not — and cannot — know whether these explanations based on wishful speculations are actually true – after all, if wishes were nickels we’d all be rich. That, and biochemical changes that allegedly “evolved” hundreds of millions of years ago leave no meaningful evidence behind — but Darwinists are able to close their minds once more, secure in their philosophy with the certain knowledge that a “palatable” naturalistic explanation exists and such removes all credibility, in their closed minds, from the obvious fact that life was designed.

The truth is that Darwinists like to tar believers in the Biblical account of creation as religious fanatics.  The truth is they are much more fanatical in their beliefs since they believe in irrational nonsense that is not supported by either logic or actual science.

The truth is the Biblical account of creation is both more plausible and more scientifically sound.