You Can’t Do Everything

When I began blogging, Gregg had recently left and was working in Afghanistan.  For almost two-and-a-half years we lived that way — 8,000 miles apart, a few stolen weeks together a year.  What that did was open up a whole chunk of time for me – time spent on the computer while I chatted with him instant messages, time spent in video conference with him, or just time with no husband around.

Gregg has now been home, full time, for over four months.  What I’ve discovered now is that I don’t have enough time.  I don’t think I realized just how much time I sat with this laptop in my lap until now.

This blog, Facebook, Pinterest, Twitter…they all suck time away from the day.  Time that just doesn’t exist for me anymore.

I’d been tossing around the idea of quitting blogging for about three months now.  I really started thinking about it as soon as it dawned on me just how much less free time I have during the day when I no longer conducted my marriage via long distance means.  Since I feel very strongly that the Holy Spirit is who led me to starting the blog, I started praying about it.

A few weeks ago, Gregg fixed a glich in the blog main something something.  When he did that, he reinstalled Stat Counter — something I’ve not had for months.  I’d blogged about how freeing not watching those numbers any more was for me.  Well, when he reinstalled it, I just checked to see how low my numbers were now that I wasn’t linking to blogs anymore, and wasn’t actively promoting Hallee the Homemaker.

It made me pause in the considering.  If the numbers were going up so high, then there must be a reason, right?  Why stop now, when there’s such a momentum?

But, that didn’t add time back to my day.  I have a daughter in high school who is extremely busy – volleyball, church youth group, volunteerism.  I have a 5-year-old in preschool whom I have to drive back and forth twice a week.  I have a three-year-old who is so precocious that to know him is to absolutely love him, and to care for him includes making sure he isn’t climbing kitchen counters to get steak knives to use in mock sword fights, or making sure he doesn’t actually slide down the stairwell banister as is his utmost desire.  And, I have a husband.  Home.  Every night.  Waking up next to me every morning.  Who takes me on weekly dates, with whom I spend lunch hours in Lexington, whom I like sitting next to on the couch while we watch some silly movie — laptop free.

As I wrote about in Of Course It’s Not Easy! It’s Work! a homemaker should not be expected to do it all, perfectly, all the time.  I said:

Homemaking is a job.  It requires full time attention.  It encompasses a huge amount of responsibility from maintaining a clean home, doing laundry, cooking, caring for children, caring for the spouse, gardening, preserving, etc. etc.  For some of us, it also includes homeschooling.

If you don’t enter into it treating it as if it were a job, as in giving it your full attention and energy when it’s required, then it’s going to overwhelm you.  One thing that this generation battles that the generation who read America’s Housekeeping don’t are too many outside distractions.  You can allow yourself to be sucked into television or the internet and lose hours a day – hours that your home requires of you.

I think that people get the wrong impression thinking that a homemaker has loads of free time on her hands, with no responsibilities of a boss and co-workers and deadlines.  But the fact of the matter is, it is a full time job.  I could easily fill all of my waking hours with my homemaking responsibilities. 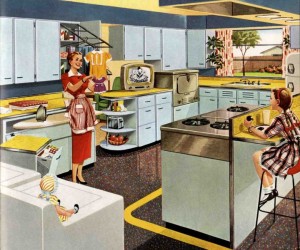 I’ve always been nothing but honest with you, and here’s the truth: I can’t do it all.  I can’t keep my house to my standards, cook food to my standards, parent to my standards, and be the wife I need to be for my husband AND manage a daily blog and the corresponding work that goes with it.  Things slip.  If you could see the pile of laundry I have to wash, the other pile to fold, and the boxes of Christmas decorations in the Florida room that still need to get down to the basement — you would know that in the last four months, my household has been on a slippery slide.

So, I decided that I would close down Hallee the Homemaker.  But, like I said, I started praying about it.  And, despite our best efforts, God doesn’t always do what we would have Him to do.

Gregg and I spent several hours on Saturday, hashing out schedules and budgets and schedules and plans and calendars.  A big focus of our meeting was this blog.  We worked out a schedule that will work, but it will require things to change.

I am disciplining myself from the computer.  Until at least 1PM every single day, it will not get turned on.  Even if I don’t have a blog post written yet.  Even if I know there will be comments in moderation.  Even if I am waiting on an email from someone.  Even if I have email to which I still need to respond.  Even if I thought of some quirky or clever Facebook update.

That’s going to mean that posts may become sporadic.