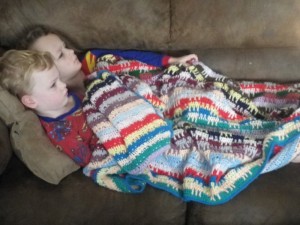 Right after Gregg’s 8th birthday, his mother died from breast cancer. One of the few things that we have of hers is a box of blankets that she crocheted.

For years, that box sat in storage. One day last year, I came across the box and decided that, if I had crocheted a box of blankets, I would want my son’s family to use them rather than keep them in perpetual storage.

So, I pulled one out, washed it, and laid it across the back of my couch.

Now anyone lying on the couch who wants a blanket grabs that one. The boys are constantly lying under it, fighting over it, running through the house with it. We tell them Ma-Maw Ryta Gail made it. Then we tell them how much she would love them. 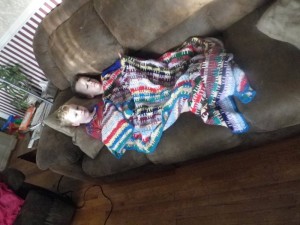 I’m trying not to panic now that the one I pulled out has a hole in it.  I still want us to use it, after I get it fixed, but there’s a part of me that wants to hide it back in safety in its box, where it’s survived, hole-free, for the last nearly 40 years.  I just really think, that if it were me, I’d want my kids and grandkids to use it.  So we’ll get it fixed and put it back out and hopefully, another little foot won’t go through it again.