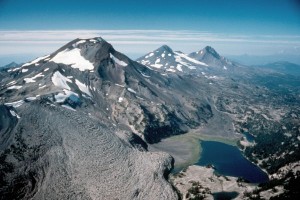 My parents were both born and raised in Oregon.  We lived there for a portion of my childhood.  In the Cascade Mountain Range in Oregon are three inactive volcanoes that have been named The Three Sisters.  They are a beautiful sight.  When I was 13, my grandparents took me on a trip to Crater Lake, which is where my parents honeymooned.  Somewhere near Crater Lake is a tall peak, and on that peak is a five or six-sided structure with windows all around.  I want to say it was stone, but it’s been a long time since I was 13.  (UPDATE: My dad emailed me and told me the structure was made from lava and is called Lava House.  Here is a link to some pictures of it – it is remarkable on its own.)  If you looked through each window, you could see all sorts of named mountains in the Cascades – off of the top of my head, I can think of Mt. Hood, Mt. Jefferson, and the Three Sisters.  I remember standing in the middle of that little lookout and the view of the Three Sisters being absolutely breathtaking.

Consequently, a few weeks ago, when I was linking up to Amy’s Finer Things’ Frugal Gardening 101, and saw a post in the link-up titled, “Three Sisters,” I was very curious and must have had a few extra minutes, so I clicked it.  What I discovered was a whole new way to manage small gardening spaces.

Three sisters is a Native American gardening technique called “intercropping”.  Three plants – corn, squash, and beans – are planted together and work together.  The green bean crawls up the corn stalk and uses it as a pole, nourishing the soil at its roots with nitrogen nodules in its roots, and the squash grows along the base of the corn and beans, providing ground cover to retain moisture and prevent weed growth.

Me being me, I decided to try it. I read different methods of how to do this, and chose the one that most worked with my garden layout.  I eked out two more rows next to my corn field, blending the new smaller garden with the corn garden, and planted some corn I already had growing (I’d planted some corn because the corn in the garden was taking forever to grow – and wouldn’t you know the day after I planted a single corn seed in 24 cups, the corn in the garden all popped up at one time?)

As I planted the corn, I planted a green bean and a squash seed with each plant.  For the squash, I used zucchini and butternut, alternating planting throughout. 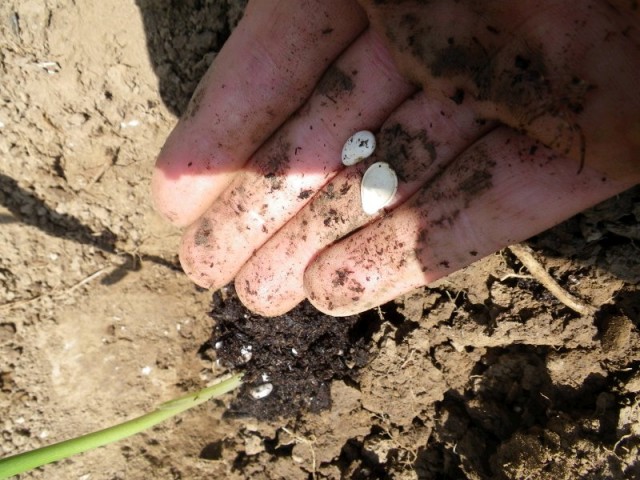 I’m excited to see how it turns out.  Further reading tells me I should have planted the beans then come back later and planted the squash.  Since squash grows much quicker than beans, that’s probably right and I may pull the squash up as it grows and replant it later – we’ll see.  This is all new and a learning experience. 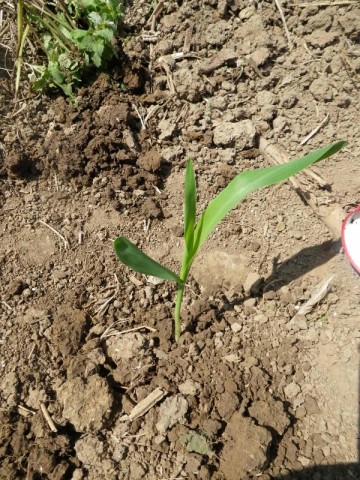 Have you ever tried Three Sisters or any other kind of intercropping gardening?