Gregg and I have been married for over eight years. We didn’t live together until our first anniversary. Three months after we married, he deployed to Afghanistan. A couple of years later, he changed his military specialty and went to school 400 miles away for eight months. A couple years later, he went to another school, even further away, for six months. He is currently in Afghanistan again, this time as a civilian contractor, and has been working there for 22 months. On top of these extended absences, his civilian job had him away from home for months at a time, when he would come home on Friday night and leave again on Sunday. We have spent more time apart than together, so we have learned how to have an abiding, intimate relationship even though we’re, at times and currently, thousands of miles away from each other. This series will provide you with little tips and hints we’ve picked up along the way. 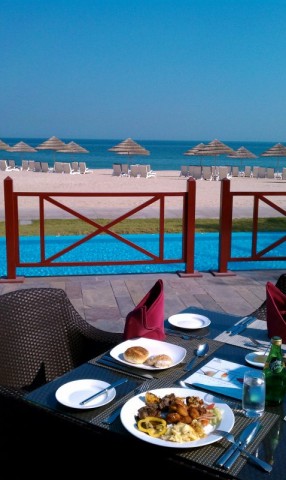 This is a picture Gregg took a couple of months ago from a hotel patio in Kuwait.  Two weeks ago, he received instructions to attend a week-long class there again.  He said to me, “It would be cool if you could come.”

To which I responded, “It really would!  How much fun would that be?”

To which he said, with barely a pause, “Then make it happen.”

Two weeks before travel date, I had airline tickets in hand, children distributed, and hotel reservations made.  Now I’m just counting down the days and figuring out how one dresses for Kuwait in January.

I cannot wait.  Look at this beautiful view.  This is our hotel and we’re hoping for a room with a patio like this one.

One full week – just the two of us.  A few days into my stay, he’ll have to start attending his class.  But, that’s okay.  We’ll have dinner together and nights together before he has to be back at class the next morning.  That will give me all day those days with nothing to do but write or blog and look forward to my husband walking through the door that evening.

It’s hard to explain to you the ache and emptiness he and I have existed with on a day-to-day basis for the last two years, when just the thought of sharing meals together and sleeping in the same bed for seven straight days and six straight nights makes us giddy with excitement.

We’re counting down the months now; six more months and he’ll be home for good.  So, we’ll steal this week together, and the kids and I will steal a week with him in Europe over spring break, and those six months will be broken down into mere weeks — I’ll come home from this and count down the weeks until Spring Break.  The kids and I will come home from that and count down the weeks until June.

We’re on the downhill stretch right now.  And in six days, I’ll be boarding a plane and begin my journey to break that stretch up just a little bit.