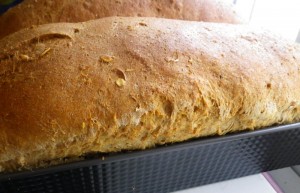 On the Monday of Pastor’s Fellowship, our women’s group serves a fundraising lunch.  We serve all kinds of sandwiches, chips, fruit, and drinks.

They asked me to make Hallee’s Fabulous Travel Sandwiches.  I made them last year and they were a huge hit.  I readily agreed, then lost track of time.  Sunday during church, I realized that Pastor’s Fellowship started the next day, and that I needed 12 Travel Sandwiches at the church by 10AM.

Consequently, the bread was store-bought.  It was as-quality-ingredient-as-I-could-get store bought, but store-bought nonetheless.

Kaylee came after school and I made her a plate of sandwiches.  Halfway through the first one, she stopped eating and said, “This isn’t your bread is it?”

She said, “I could tell.  These still taste good, but they’re so much better with your bread.”

That same day, as I was doing dishes in the church kitchen, my cell phone rang.  A friend was calling and the first words out of her mouth were, “I was just calling to tell you that you changed my family’s life.” 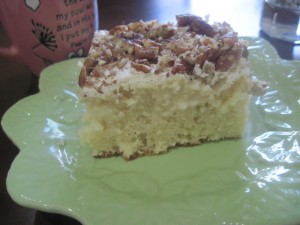 She went on to tell me that last Friday was her oldest son’s birthday.  She has four children, middle school to elementary school aged.  They bought a store-bought cake and no one wanted it.  “We want a Hallee recipe,” they said.  She said she came home from work that day, four days later, and half the cake was still sitting there, uneaten.

As I type this, I think about church potlucks.  At every church potluck I’ve been to, tables have been absolutely weighted down with food.  Always within the sea of casseroles and green beans, of peach cobblers and chocolate chip cookies, there are store-bought items.  And while I know that sometimes that’s all that someone can do, and they’d rather do that than not contribute, the homemade stuff always goes first.  Homemade cakes and pies are gone before the first store-bought pie gets touched.  Homemade salad bowls are empty before the first deli potato salad gets touched.

Never discount the overall goodness of homemade food.  You’re not only controlling the ingredients (have you ever read the label of a store-bought bakery cake?), but you’re creating a dish or a dessert or a loaf of bread with love, something that tastes good, something that your family can taste the difference from store-bought.

Even when they don’t say so, they obviously will appreciate it.  Maybe they won’t appreciate the work that goes into making something from scratch, but they’ll appreciate how much better it tastes than something you didn’t  make.  And they may not  realize they appreciate it until they’re eating their favorite sandwich on store-bought bread or staring down a birthday cake they just don’t want to eat.