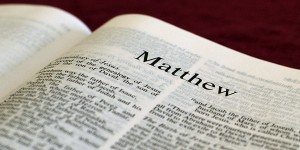 Today, I listened to Malachi 2 through Matthew 9.

It would be nearly impossible to remark on any one specific thing that stands out to me when I listened to the end of the “Old Testament” with God’s own words and then the beginning of the Gospel According to Matthew, which contains everything from the Sermon on the Mount through the Lord’s Prayer and into Christ’s ministries on earth.

But while I was listening, I was reminded of the testimony of a Jewish man who had come to know Christ. He was given a Bible in college, and had a friend who evangelized to him. One night, he picked up the Bible and turned to the first page of the New Testament – which lists the genealogy of Christ through Joseph. And, that genealogy spoke to him more than any other words in that Bible. Because, as he read through the names, he recognized them and thought, “These are my people.  This is the story of my history.”

That opened the door of his heart. As he read on, he read Matthew quoting specific prophecies that were coming true with Jesus’ birth, and he thought, “This is my prophet.”

He accepted Jesus as his Lord and Savior that very night in his dorm room, and began an evangelistic journey that has so far allowed him to witness to thousands upon thousands of people.

As I ponder that, it occurs to me that God has a plan for every single word written in His word.  Even those long and seemingly unnecessary genealogies. So, read the names, ponder the real people listed there, and consider the impact they’ve had on the generations of man.