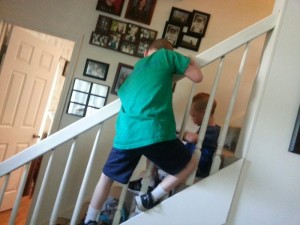 My kids could entertain themselves electronically all day long.  We don’t have cable, but we do stream Netflix.  It wouldn’t be unusual for Kaylee to be watching something on her laptop in the kitchen, Scott surfing on Lego.com in the dining room, and Jeb watching a show in the living room.

I’m not strict about turning things off on Saturdays.  They don’t have time to do a lot during the school week, and on Sundays we only watch shows that are about God or The Bible. So, I tend to give them free reign on Saturdays.  As summer approached, it became clear to me that the boys were anticipating every day during summer being like Saturdays.  I realized I had to quell those thoughts.

We established the rule that the television and all computers are turned off at 9AM and do not get turned back on until 3PM.  School has been out almost two weeks now.  Some mornings, like this morning, they forget to even turn the television on until it’s too late.  Most days, it’s closer to 5 before anyone even asks for the computers or TV’s to come back on.  There ARE days when Scott is anxious to get onto the computer and asks me every five minutes what time it is, but those days are WAY fewer and far between the others.

Instead, they play in their pool, help me in the garden, cook with me, put together puzzles, play games (it’s become a tradition now that when the TV goes off at 9AM, Marvel Heroes Memory game gets pulled out!), draw, play with Legos, play with toys, or just climb the walls.

It also pulls me off of the computer, which is a good thing because I promised myself that I would take the summer off of “work”.

How are you handling kids and entertainment this summer?