You Just Can’t Plan Some Things

I’ve never been  in a big rush to push milestones  on my kids.  Kaylee did some things early (potty training) and some things late (walking).  Scott was late with everything, but in all fairness to him, he was two months old before he weighed six pounds and spent a lot of time catching up physically.

Johnathan (Jeb) is two months shy of 3-years-old.  For the last few months, Jeb has really been pushing for potty training.  He sees his brother using the toilet and wanted to do it himself.  If he had on a diaper, he wanted it off so that he could go to the bathroom.  If he was naked, he never had an accident – he always realized he needed to go to the bathroom and would get there in time.  But, the second I put underwear on him, he’d have an accident.  I don’t know what it was about the feel of cloth on his skin that triggered it, but oftentimes it was within a few minutes.  We never had a successful outing with underwear instead of a diaper or pull up.

Needless to say, he spent a lot of time at home naked from the waste down.

I used cloth diapers, but training pants and vinyl covers didn’t work well.  They always leaked, especially if Jeb was in his car seat or seated in a stroller.  So, I went from cloth diapers to disposable pull ups.  I only used them when we  went out and at night.  Most of the rest of the time, I just let him be at home naked. 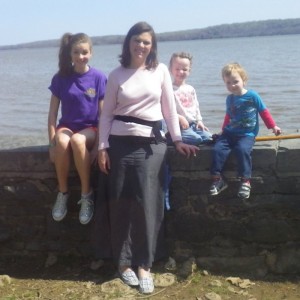 We left Saturday morning for our Washington D.C. spring break trip.  I’d bought the boys new underwear, and as  I packed Scott’s, Jeb insisted that I pack his, too.  The drive from our house to D.C. was about 8½ hours.  Every time we stopped for gas or bathroom breaks, Jeb went to the bathroom.  When we got to D.C., I took a dry pull up off of him.  For the next three days, during hours and hours of touring, playing, and shopping, he never had an accident – his pull ups were always dry.  By the fourth day, I asked him if he wanted to wear a pair of his underwear.  He was so excited to get to put on his new Superman underwear.

I couldn’t believe that he potty trained 500 miles away from home, day in and day out riding Metro trains, sleeping in the Ergo, sitting in the stroller, going through historical landmarks and museums.  It has been almost an entire week, he hasn’t had a single accident, and by now he’s not even wearing pull ups to bed.

I guess when a kid is ready, he’s ready, and it doesn’t much matter what your plans are.  HA!