Educating Ourselves on School Lunches

I think school lunches have been on the radar for at least the last year – with Jamie Oliver’s Food Revolution airing last April.  I know a lot of those in the “real food world” have been speaking out about them for years, but to little to no avail. But Jamie Oliver got the mainstream America talking, at least for a little while.  School lunch news this week has been all freshly abuzz with the premiere of Food Revolution 2, an article in the Washington Post about flavored milk, and an article in the Chicago Tribune about a school that didn’t allow any child without a medical permission slip to eat anything but the lunches provided by the school.

Jamie Oliver’s Food Revolution Season 2 began on Tuesday night on ABC.  Here is a link to the first episode.  I don’t know how long ABC keeps their links up, but hopefully it will be long enough for you to be able to see it.  Unlike the first season, where the schools in Huntington, West Virginia, opened their cafeteria doors to Oliver, this season in Los Angeles, he has not been allowed into the schools.  Instead, he has students and parents bringing him food from the schools.  One of the things that he does really well is bring his point across visually.  In the first episode, he filled a school bus full of sugar to show how much sugar students consume in a single week by drinking flavored milk.  Seeing that much sugar spilling out of the door of the bus is much more shocking than hearing that they’re drinking 28 grams of sugar.  If you don’t think that’s a big deal, you might want to read this New York Times Magazine article titled, “Is Sugar Toxic?”

As far as flavored milk goes, this week in the Washington Post, there was an article about two districts in their reading area banning flavored milk, but among a sea of controversy over such a ban, one county was reintroducing it back into the cafeteria.

“We got 10 to 20 e-mails a day,” said Penny McConnell, director of food and nutrition services for Fairfax. “It was a lot of pressure.”

A lot of pressure from parents demanding that their children be allowed to consume flavored drinks that had as much sugar in them as a can of soda pop or a candy bar.

And finally, the Chicago Tribune reported on a school that has a rule that students were not allowed to bring lunches from home (without a medical excuse).  What I read last night was that the principal has decided not to continue to enforce that rule in a sea of blogosphere controversy about this rule.  But one dissenting post I read pointed out that for six years it’s been a rule, and no parents have complained.  Of course no parents have complained – 99% of the students in that school get free school lunch – who is there to complain?

It all boils down to education.  I really believe that if most parents were educated on just how bad processed, refined, artificially flavored, chemically enhanced, ammonia washed, bleached, enriched foods are for their children, how damaging it is to their bodies, how obese our children are becoming due only to the food choices parents are making, and how much their children’s health will suffer from the constant consumption of it  — I really believe that if most parents knew about it, really knew and understood, they would make changes and they would demand changes.

I was talking to a young mother a few weeks ago about food.  She grew up eating fast food, and has no education about good foods.  She was asking me questions about feeding her kids certain things and said, “My son (who is 2) loves cheese.  He eats it all day long.  Is that bad for him?”  I asked her what kind of cheese.  She said, “You know.  Cheese.”  I asked her if she was talking about processed American “cheese” or chunks of natural mozzarella.  By the end of the conversation, I found out that she only knew about processed American “cheese” – she had never eaten (other than on a pizza) any other kind of cheese.  I was appalled that she didn’t even know about other kinds of cheeses, and wondered if she was pulling my leg until I realized she was completely serious.  I opened my cheese drawer in my refrigerator and emptied it into a bag for her so that she could take it home and experiment with different cheeses and different tastes for her kids.

Another woman I was speaking to was telling me how excited she was that her 9-year-old daughter was learning how to cook.  Interested, I engaged her about it and discovered that she had purchased her daughter a toaster oven so that she could cook her own frozen pizzas.

Early in the school year, I posted a picture on my Facebook page of Kaylee’s typical daily lunch.  I said that Kaylee had told  me that her friends think her lunch is “weird.”  Every day, even now – two months before school gets out for the year – when she opens her lunch box, her friends crowd around to see what “weird” food she’s bringing today.  Here is the picture I posted: 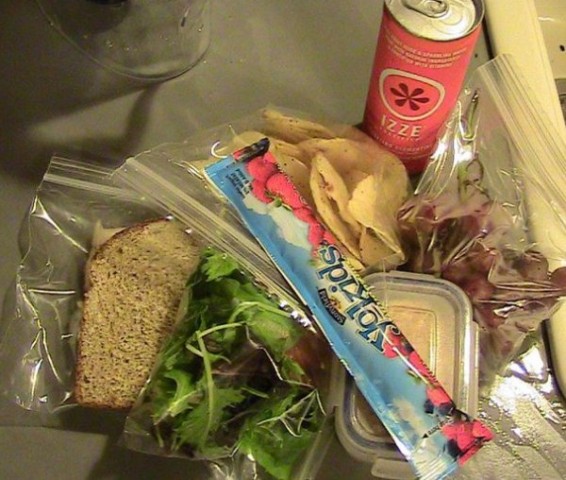 It contained: turkey with mustard on homemade bread, lettuce & tomato for the sandwich, salt & pepper potato chips, (organic) yogurt tube, (organic) grapes, a slice of homemade pumpkin pie, a can of sparkling clementine soda (she also carries a water bottle from which she drinks  all day).

I personally don’t understand how school lunches didn’t make a radical change nationally after the exposure of the federal government’s regulations about school lunches were exposed in the first season of Food Revolution.  I know that Michelle Obama initiated a school lunch reform that President Obama signed into law in December.  But that law has to battle against each state’s individual law’s regarding school lunch regulations, and change is going to be resented, if not outright ignored.  Knowing how bad the food offered by the schools can be, even on my laziest mornings I make sure Kaylee walks out the door with good food that will help her in her school day and extend to her evening full of softball practices or games.

She is excited because she starts high school next year.  After her recent tour of the school, where her class ate lunch in the high school’s cafeteria, she came home telling me about the fresh salad bar and other healthy offerings.  Because while we’ve educated ourselves about good food versus bad food for our bodies, we’ve educated her, and taught her how to make the healthiest choices when it comes to what to eat.  We don’t ban fast food, we just want her to make good decisions.  She’ll pick grilled chicken at McDonalds, or a salad at Wendy’s, and vegetarian sushi over any of it.  She certainly wouldn’t think homemade lunch was “weird”.