Every Sunday, my clever husband offers me a “day of rest” by writing posts on the subject of his primary ministry, Creationism vs. Darwinism, which is a subject that has broad reaching scientific, social, and metaphysical implications. For both believers and non-believers alike, the primary purpose is to present scientific, historical, logical, and/or sociological data in an empirical fashion, as much as possible written in layman’s terms, and in a format suitable for supplementing any homeschool curriculum whether you choose to believe the Biblical account — or secular guesses — about the origins of human life on earth.

Where Have All the Cavemen Gone? 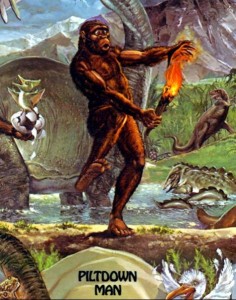 From grade school on up, children are taught about “cavemen,” and are gradually conditioned to the idea that we evolved from lower forms of life. They are also taught about the bones and skulls of our “ancestors.”

The first introduction many children have to evolution are pictures of dinosaurs and cavemen. It is true that there have been groups that have lived in caves. They wandered from warm climates to colder ones and chose to live in caves for a time before building themselves homes in a new land. But the fact that some people lived in caves for awhile does not prove evolution from one species to another.

Diodorus Siculus, writing about 60 B.C., told of people living along the shores of the Red Sea in caves. He describes many other barbarian tribes, some of them quite primitive. Thus we see that both advanced civilizations and more backward cave cultures lived at the same time. We have no reason to conclude that the less advanced peoples were ancestors of the more advanced ones.

Archaeologists tell us that, in some places in Palestine, people resembling the Neanderthal race lived in caves while not far away in Jericho people dwelt in well-built, beautifully decorated houses. That is true, and also places “cavemen” and human beings living in similar locals at exactly the same time. This contradicts the notion that human beings evolved from those so-called “primitive” cave dwellers.

The concept that we are just animals, only slightly removed from apes, means that there are no moral standards, no laws worth obeying, no future, and no hope. It means that we would be better off operating from the cradle to the grave based on instinct and biological imperatives, doing whatever is necessary for survival. The realization of this consequence even penetrated the gloom of Charles Darwin’s mind at times.

As adults, we frequently hear reports of fossil remains of apelike humans that have been found. Each discovery has been hailed as a landmark proof of the theory of Darwinian evolution. Scientists have given a name to these supposed half-man/half-ape remains; they call them hominids.

Is it really true that such skeletal remains of evolutionary missing links have been found? Are we really related to apes? Did man arrive from monkey?

Or is it all just one big ongoing fraud?

In 1868 a large cave was discovered at Les Eyzies, in the Dordogne area of France. In the local dialect, cro-magnon means “big hole.” A number of skeletons have been found there, and have been hailed as the great “missing link” between man and ape.

Cro-Magnons were fully human. Some stood over six feet tall, with a cranial volume somewhat larger than that of modern human beings today. This means they had more brains than men have today. Not only did they have some excellent artists among them, but they also kept astronomy records, wore jewelry, and buried their dead. The Cro-Magnons were normal people, not monkeys; and they provide no evidence of a transition from monkey to man.

In 1921, Rhodesian Man was discovered in a cave in, of course, Rhodesia. Anthropologists and artists set to work turning him into a half-ape/half-human sort of creature.

But then a competent anatomist had the opportunity to examine the find, and found that this was just a normal human being.

Further analysis revealed dental caries which modern diets tend to produce, and also a hole through the back of the skull made by either a small caliber bullet or crossbow. So Rhodesian Man was not so ancient after all.

Taung African Man was found in 1924 by a gentleman by the name of Raymond Dart, when he came across the front face and lower jaw of an immature ape in a cave in the Taung limestone quarry in South Africa. He rushed to report it, accompanied by extravagant claims. A majority of scientists rejected this find, but the press loudly proclaimed it to be the “the missing link.” Today most experts dismiss it as the skull of a young ape.

“Differences due to age are especially significant with reference to the structure of the skull in apes. Very pronounced changes occur during the transition from juvenile to adult in apes, but not in Man. The skull of a juvenile ape is somewhat different from that of Man. We may remember that the first specimen of Australopithecus that was discovered by Raymond Dart, the Tuang ‘child,’ was that of a juvenile [ape]. This juvenile skull should never have been compared to those of adult apes and humans.” Duane T. Gish, Evolution: the Challenge of the Fossil Record (1985), p. 178. 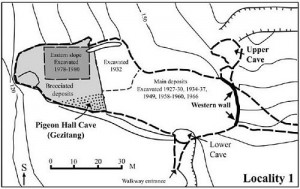 Peking Man also emerged on the international scene in the 1920s coincidentally about the same time that the finances of Davidson Black were nearly tapped out. In 1927 he found a tooth near Peking, China. What a stroke of luck!

The Rockefeller Foundation stepped forward and gave him $80,000 to continue research on this colossal find. That is equivalent to around $3.2 million in today’s dollars. So, of course, Black continued looking around and, by another gigantic and unbelievable stroke of luck, came up with a skull, plaster copies of which (or plastic copies of the plaster copies) are displayed in biology labs today.

Black named his find Sinanthropus Pekinensis , his authoritatively scientific sounding name meaning “China man from Peking”, and received honors from all over the world for his discovery. After his death in 1934, the very same Jesuit priest who had helped prepare Piltdown Man, Teilhard de Chardin, took over the work at the site. Then Franz Weidenreich led the effort until all work stopped in 1936 with of the Japanese invasion of China.

The site turned out to be some kind of weird picnic site or garbage dump. Although thousands of animal bones were found in this pit near Peking, only a few human skulls were found; and there was no evidence that they had evolved from anything else — even though there was 150 feet of animal bones in the pit.

These human bones totaled 14 skulls in varying conditions of preservation, 11 jawbones, 147 teeth, and a couple small arm bone and femur fragments, along with some stone tools and carbon ash from fires. Note that Peking Man was represented mainly by skulls — hardly any postcranial material. Not a pelvis or a rib. Not a vertebrae nor a hand bone. Not a foot bone nor a knee cap. Just skulls.

The evidence indicates that this may have been a either a dining area or a garbage dump, and that both animals — and people — had been eaten there.

The openings at the bases of each skull, called the foramen magnums, had been widened and smashed in, as if someone had wanted to scoop out the brains. So, just what exactly had been excavated? A living site? A burial ground? A place of ritual cannibalism?

The skulls also displayed the familiar prominent brow ridges which we find in Neanderthal, Australopithecus, elderly modern human beings, and some modern Philippine, Black, And American Indian people today.  The prominent brow ridge was used in textbooks in the early part of the century to point out how the “lower races” — presumably as opposed to the “favoured” races — were just one step up from apes.

“Amidst the uncertainties of war-torn Beijing [then called Peking], it proved impossible to store them [Peking Man bones] safely with Chinese authorities, so Weidenreich finally packed them for military shipment to the United States. They were believed to be aboard the marine ship S.S. President Harrison, which was sunk in the Pacific in mid-November 1941. So Peking man’s bones may now be resting on the ocean’s bottom..” R. Milner, Encyclopedia of Evolution (1990), p. 359.

Whatever happened, all the skulls disappeared during World War II, so we cannot now examine them using modern methods to verify their genuineness. It is important to keep in mind that all that remains of Peking Man are plaster casts in the United States. Plaster casts cannot be considered reliable evidence as Piltdown Man dramatically made clear. It is also important, I think, to remember the role Teilhard de Chardin played in the Piltdown Man hoax.

Logic dictates that if Peking Man were an intermediate sub-human species, one of man’s evolutionary ancestors, that lived for even a few hundred generations, there should be abundant fossil remains available today.

In the 1950s, Ernst Mayr invented a new authoritative and scientific sounding name, that of Homo erectus, and then categorized a variety of bone finds into it including Java Man, Peking Man, and several others.

The truth is that there have never been any missing links found from monkeys to men.

That is the truth.

Natural laws and chance alone are not adequate to explain all natural phenomena, up to and including the existence of intelligent life itself. This is a belief that is shared by many rational scientists and many, many people throughout history and around the globe today.

The truth is that we are all created from one blood, all nations of men. We were placed here not as a mathematically impossible random act, but as an act of will by a supreme being.