The last few  Sundays, I have explained the basics of the Darwinist belief in spontaneous generation packaged for textbooks as abiogenesis, and recently re-packaged and re-branded and re-labeled to be called biopoiesis, until a new and improved authoritatively scientific sounding word replaces that one, I’m sure.  It means, in a nutshell, that Darwinists preach about life magically forming from non-life.

If you do not have that context, I encourage you to select the CREATION category and read through all of the previous posts. I pray that doing so will be a blessing to you.

The Law of Mass Action

Let me come up for air long enough to discuss actual science. Yes, close your middle school textbooks that should begin with the words, “Once upon a time…” and end with the phrase, “…happily ever after” and join me in talking about some real science.

Darwinists relate a tale of how amino acids miraculously formed themselves out of seawater. This fairy tale is always conveyed with great conviction, as if someone personally witnessed the event taking place. No one has ever seen this occur.  The ridiculous part is that the exact same seawater needed to make the amino acids in the first place would then prevent them from forming into proteins, lipids, nucleic acids, and polysaccharides. 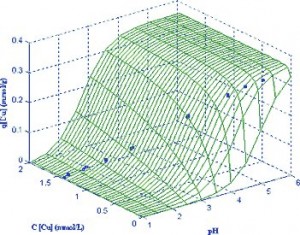 This is real science. It is both predictive and observable.  This is commonly called the Law of Mass Action.

Darwinists recognize that, if a life form suddenly appeared from nothing, it would probably have had to do it in some ancient sea or mud puddle or pool or — to quote Charles Darwin himself — some “little pond.” In summary, it is generally believed that water would have had to be present.

The Law of Mass Action would immediately — as in instantly — neutralize the procedure and utterly ruin the desired outcome. Assuming that the exact amount of energy is even present to perform a reaction in the first place, chemical reactions ALWAYS proceed in a direction from highest to lowest concentration.  Always.

Even if some protein could possibly form in water all by itself (it can’t), the Law of Mass Action would immediately become operative upon that protein. The protein would hydrolyze in the presence of the abundant water and return back into the original amino acids which formed it. Those amino acids would, in turn, immediately break back down into the separate chemicals that formed them.

And that, dear reader, would be the end of that.

The Law of Mass Action constitutes a hindrance to protein formation in the sea as well as to the successful formation of any other life-sustaining compounds, such as lipids, nucleic acids, or polysaccharides. If any of these compounds could possibly form in water all by themselves  (they can’t), the fact is that they would not last long enough to do anything useful.

Chemical reactions proceed from reactant substances to compounds produced in the manner normally expected. But these reactions tend to reverse themselves more easily and quickly.

For the Darwinian fairy tale to “hold water,” not just a few, but hundreds of thousands of amino acids had to miraculously create themselves out of raw seawater that was completely devoid of any life. However, the amino acids would — without exception — separate and break up immediately and simply not remain in existence long enough to “figure out” how to form themselves into the preposterously complex patterns that make up so-called “simple” proteins.  This is well before we even broach the topic of ridiculously complex sequences of information contained in RNA and DNA. As soon as the chemical reaction that made the amino acids occurred, the excess water would have had to be immediately removed in order for more complex compounds to form.

The revered icon of Darwinian evolution, the Urey-Miller experiment, involved a humidity trap which they designed to remove the water and thus preserve the so-called “organic compounds” that resulted from the apparatus.  These were actually leftward and rightward amino acids in a sea of toxic formaldehyde, but that is a story for another day.  The trap kept those simple amino acids and poisons from being hydrolized by the Law of Mass Action.  What are the odds that “nature” had that kind of forethought in the so-called primordial environment?

In order for Darwinian nonsense theories of the origin of life from non-life to take place, universal laws — observable facts, evidence, logic, reproducible experimentation must be utterly ignored in preference to a belief in an impossible fantasy. The problem for them, then, is that the Law of Mass Action applies to every chemical reaction which is reversible, and thus to all organic life compounds.

So, fact: without massive water loss, proteins cannot form in water. Later experiments involved designing and implementing condensation coils to remove fluid in very precise ratios.  Fats, sugars, and nucleic acids can come from proteins only by very careful removal of fluid, amid other equally complicated activities conducted by laboratory technicians claiming to have reproduced the “primordial” environment.

There is simply no “primordial” environment anyone can imagine that includes perfectly engineered humidity traps and painstakingly designed condensation coils which also happened to arise as a result of random and undirected processes.  And there are no such devices in existence in all of nature today. 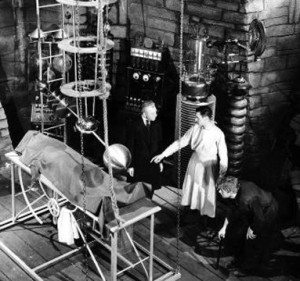 Darwinists make the astonishingly illogical argument from ignorance that life was created by accident “just so” and shift the burden of proof to anyone else in the world to “prove them wrong.”  They have yet to prove any of their own claims to be accurate and the public school system no longer teaches pupils how to think critically.

Darwinists know that some form of energy would have been required to catalyze the chemical transformations. Generally, it is theorized that there had to be a bolt of lightning. Most people recall the image of Dr. Frankenstein’s cadaverous experiment sustaining massive doses of electricity from numerous lightening strikes until — suddenly! –the dead flesh was reanimated. The good doctor shouted, “It’s alive! It’s alive! Now I know what it’s like to be God!”

The only problem is that  Mary Wollstonecraft Shelley’s story is a complete work of fiction.  Shelley could think critically.  Her tale of the good doctor is a morality tale of pride and consequence.  The fictional doctor in her novel is not God, he did not create anything, and God didn’t start all of creation by reassembling used parts.  Of course, Mary was beloved of Erasmus Darwin, Charles’ grandfather, but that is also a story for another day.

The fact is, the repetitive and relatively mild shocks administered in the Miller-Urey experiment and other similar experiments are akin to licking the terminal ends of a nine-volt battery. This does not accurately simulate a lightning strike.

The truth is that anything struck by lightning doesn’t get healed or more lively at all. Anything hit by lightning ends up rather seriously damaged or just plain killed outright, particularly at the microscopic level.

In order to believe in Darwinism, one must first have a desire to abandon the quest for truth. In pure terms, the quest for truth will inevitably lead to abandoning Darwinism and all of its fallacious trappings. Even an intellectually honest atheist would have to admit that Darwinism is just plain silly even if that atheist refused to acknowledge the logical alternative strictly on religious grounds.

The truth is that creation is explained in perfect, logical, scientifically accurate detail for anyone who cares to investigate and the one who lays the explanation out for us is the One who is responsible for that act of creation to begin with.