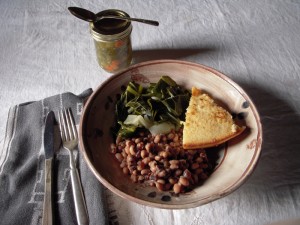 I’ve never really researched the tradition, just accepted it as what “people do”.  So, last week while I planned on writing this post, I discovered some fascinating information on Wikipedia which I adjusted for the Gregorian calendar:

These “good luck” traditions supposedly date back to the Civil War, when Union troops, especially in areas targeted by General William Sherman, typically stripped the countryside of all stored food, crops, and livestock, and destroyed whatever they couldn’t carry away. At that time, Northerners considered “field peas” and field corn suitable only for animal fodder, and didn’t steal or destroy these humble foods.

The “good luck” traditions of eating black eyed peas at Rosh Hashana, the Jewish New Year, are recorded in the Babylonian Talmud (compiled ~500 AD), Horayot 12A: “Abaye [d. 339 AD] said, now that you have established that good-luck symbols avail, you should make it a habit to see Qara (bottle gourd), Rubiya (black-eyed peas, Arabic Lubiya), Kartei (leeks), Silka (either beets or spinach), and Tamrei (dates) on your table on the New Year.” However, the custom may have resulted from an early mistranslation of the Aramaic word rubiya (fenugreek).[3]

A parallel text in Kritot 5B states that one should eat these symbols of good luck. The accepted custom (Shulhan Aruh Orah Hayim 583:1, 16th century, the standard code of Jewish law and practice) is to eat the symbols. This custom is followed by Sephardi and Israeli Jews to this day.

In the United States, the first Sephardi Jews arrived in Georgia in the 1730s and have lived there continuously since. The Jewish practice was apparently adopted by non-Jews around the time of the American Civil War.

However you celebrate the New Year, may you have a glorious year of our Lord 2010.  May God bless you and your family in beautiful ways.