My friend Natalee is a veterinarian living in Washington state with her husband and 2 awesome kids.  Imported from Canada some years ago, she does things with cupcakes you just cannot believe.  I am honored that she accepted my invitation to talk about cupcakes today, and I hope she decides to contribute regularly.  — Hallee

A few weeks ago a dear friend … yes I guess I can call her that, though I’ve never had the pleasure of meeting her in person … asked a favor of me.  Seems that she was due a very important visitor in a few weeks (okay super important visitor  ;)   ) and would need some help with her blog.  I, of course, being such a good friend, promptly forgot until I got nudged.

Seems Hallee felt that my cupcakes were somehow superior to hers, which in every way shape and form is completely inaccurate.  Still no amount of stoking up her self-esteem was to work so here I am.  An apparent cupcake whiz set upon a mission, and no ordinary cupcake mission at that.  Create a cupcake in honor of … drumroll please … Benjamin Franklin’s birthday.

I toyed with the ideas of just the standard birthday cupcake fare, the lazy way out I suppose, but then she talked about a homeschool lesson — busted.  These cupcakes had to be educational.

How to approach this task was an enormous question.  I mean I’ve made reindeer, horses, owls, cats, pumpkins, babies, dogs, rats, all sorts of wacky cupcakes but here I sat asking myself WKCWBFE (what kind of cupcake would Benjamin Franklin eat?) and WTHKDSIPOI (What the heck kind of decorations should I put on it?)  Stumped, I delved into research, granted it was Google related but it still constituted research in my book as my library time in recent years consists of keeping two small children from shrieking while in the little people’s wing.  I set out to learn more about the man behind the mission, his likes, dislikes, his creative genius, his importance to the nation in which I reside.  Okay that sounded way more important than I really researched but here’s what I came up with anyway:

I elected to create a cake in keeping with ingredients present during the period.  I elected NOT to make the frosting in such a manner, frankly I only gave myself a week and learning new materials and techniques was just not in my thinking.  But then … then … I started baking.  I made about 5 different kinds of raisin cupcake, and I fell in LOVE and so did my family with this recipe (a mixture of several recipes I found) for oatmeal raisin cupcakes (okay maybe they are more of a muffin, but isn’t a muffin just a naked cupcake anyway?).  If we want to be technical, oats were probably still very much considered animal feed in the days of Franklin (unless you were from Scotland), but heck they are tasty, add some nutrition, and well, it’s just a good cupcake okay? 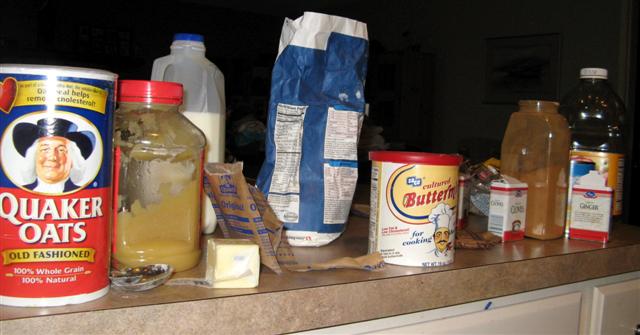 The recipe for the Oatmeal Raisin Cupcakes can be found by clicking that delicious looking picture below: 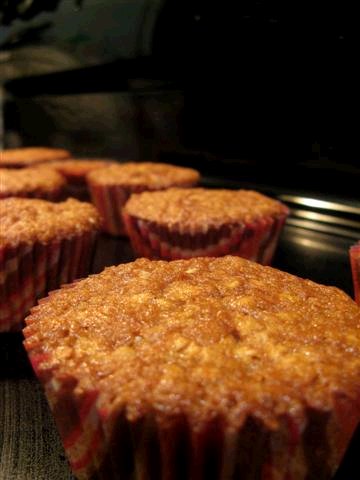 These are all simple since I couldn’t decide on just one so I had to be kind of quick in thinking these up.  They, however, do employ some techniques I love in cupcake design and hopefully they will inspire you.  Okay and confession … yes these cupcakes are stand in cupcakes … previously frozen pumpkin cupcakes, the reason?  My husband devoured the 12 cupcakes I made to decorate.  This is how good the cupcakes really are.

I tried to think of ways to make a glass harmonica, a furnace, reaching claw, and a flexible urinary catheter.  I found that these tutorials — although they might prove amusing to me and to those who read this — would not prove useful to most people performing cupcakery.  Somehow a “congrats on passing the kidney stone” cupcake just didn’t feel quite right.  I did feel, however, that the kite could easily be used for a spring party or a birthday party and the glasses could be a fun addition to an ‘over the hill’ party.   Hope I haven’t embarrassed myself too much and I do hope that I get to show off more complicated cupcakery in the future, but these were fun, educational, and hey darn tasty too!

Everyone knows Benjamin Franklin’s famous experiment which led him to the invention of the lightening rod where he flew a kite with a metal key on it to see the conduction of the current.  Now granted these cupcakes should have stormier skies, but I just thought they were pretty. 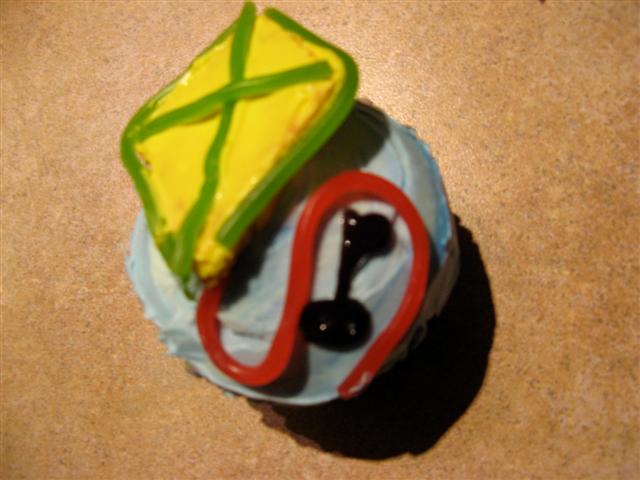 I started these by making a white and blue swirled frosting, I used Hallee’s buttercream frosting recipe since it tastes good and stands up well to being manhandled by the likes of me.  I placed a smaller spoon into the blue paste food coloring then gently folded it into the white frosting creating streaks and for me kind of imitating the sky with clouds. 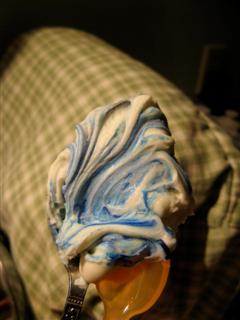 After frosting the cakes with the icing I used the workhorse of decorating the graham cracker.  These are great to cut into shapes as needed.  I recommend warming in the microwave or over a hot burner for a few seconds (10 seconds in the microwave) to make them more pliable to score with a sharp knife then snap.  For more curvy designs I choose a more fatty cookie, such as a sugar cookie or the like.  You can also bake sugar cookies into the shape that you want as well.  In terms of decorating for the future, whenever I use graham crackers I make sure to finish the decorating day of so they aren’t too soft from the moisture and fat in the buttercream. 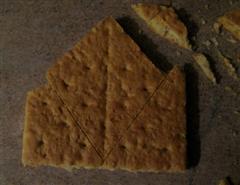 Next I frosted the ‘kites’ with yellow buttercream and decorated them using green licorice laces to outline the kite as well as make the ‘ribs’ this could easily be accomplished by piping with frosting as well. 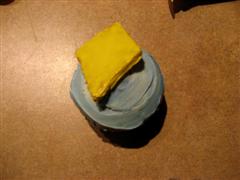 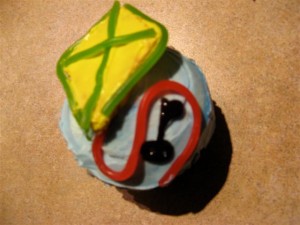 Another famous Ben invention these are much tastier. 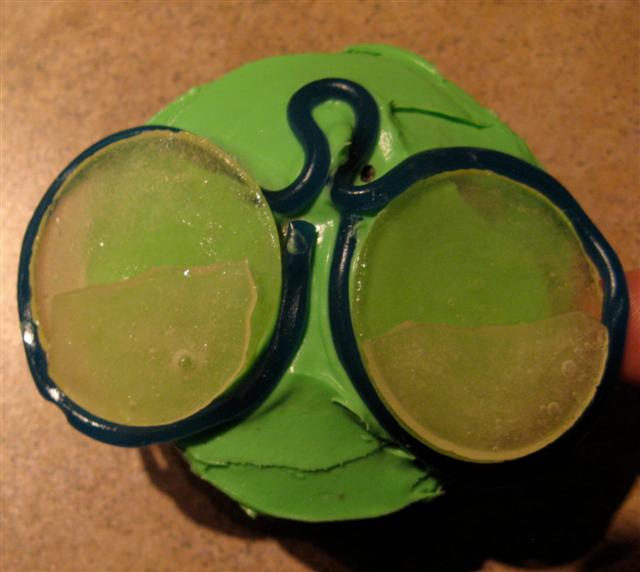 This was an experiment for me as well, I wanted to make ‘glass’ for the glasses but I couldn’t find those clear mint candies and didn’t want to risk burning sugar as I was doing this late at night so I settled on the pineapple life saver.  If I had more time I’d make them prettier, you get the general idea though :)

I first preheated the oven to 350 degrees and placed one life saver in three separate sections of a mini muffin tin that had been oiled gently with olive oil.  They took about 5 minutes to melt into the discs seen.  If I was to do this again I would cut the ‘bifocal’ piece in half while still warm as my scoring and snapping technique tended to want to shatter the candy.  I did end up with two slightly irregular secondary pieces of ‘glass’ but we are talking the 1700s after all right? 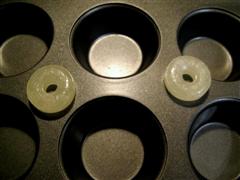 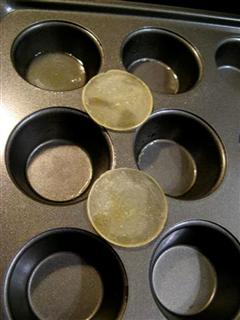 After the candy was cooled I gently moistened the back of the ‘bifocal’ part with water in order to stick it to the larger circle (wipe the oil off first if there is any remaining).  Then I placed them on the cupcake (frosted in your desired color (I was going to do fleshtone but I was doing these at 11 at night and the lighting was bad for pictures).

Finally outline the ‘bifocals’ with licorice laces OR I tried with homemade caramel and it worked well as a rolled it into a long thin rope of candy with buttered hands then laid it around the ‘glass’. 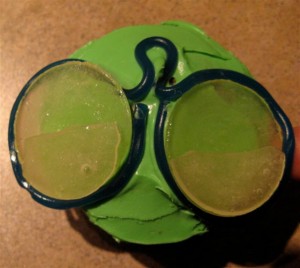 Factoid, Benjamin Franklin started the first lending library in the colonies.  Way to go Ben!  These cupcakes are the simplest of all.  Simply ice cake in whatever color frosting you fancy, take a fig cookie (your favorite brand) and smack it right on there.  Okay maybe not that dramatic, but you can pipe some decorations onto the cookie, dip the cookie in some colored white chocolate, your choice to make it as decorative as you like.  I think I might take these to a Bible study sometime. 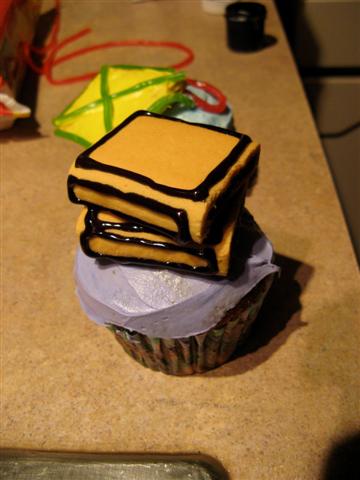 Whatever you think of it, Ben was also responsible for Daylight’s Savings.  These could also be cute for New Year’s as well if you make the time appropriate :) 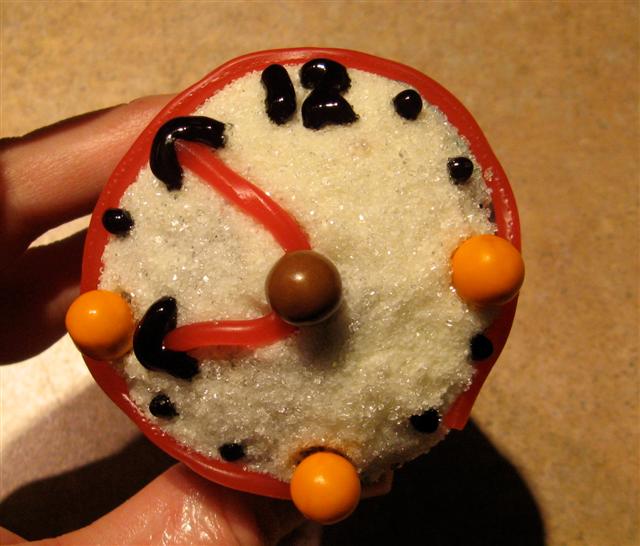 Start off by icing the cupcake.  Make it as ugly as you want.  You don’t have to be careful because you’ll smoosh the frosting into the sugar. 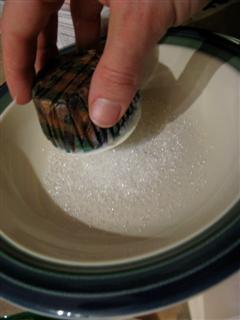 Third, use non pareils, cinnamon hots, mini m&ms, dots of icing, to make the hours.  Use licorice laces (or pipe on with icing) for the hands and the 12 o’clock mark). 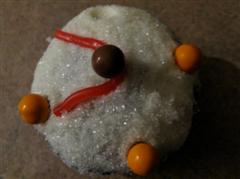 I outlined the entire cake in a licorice lace for good measure (and because I had some leftover). 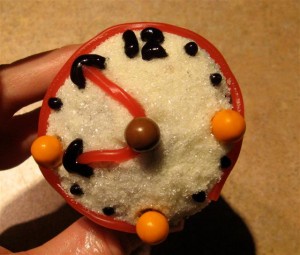 I hope you enjoyed this guest post from the beautiful and very awesome Natalee. Thanks again for filling in for me. It is really appreciated.