I thought I’d give you a picture essay about my Commissary Day yesterday.

In the front of the store, there is a little lounge area with free coffee and a big coupon exchange section. We stopped there first so that I could get my coupons in order.

Then we began. There is a method to shopping for every three months. 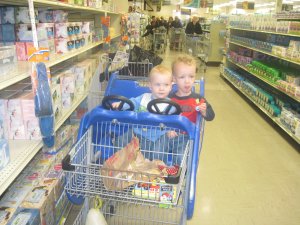 The first is expect to spend a lot of time in the store. If you have young children, like me, expect them to want snacks, be entertained, need a drink, need a nap, have a fit. It comes with it. I had two carts. This first one has two levels of carts. In the top, I put the boys’ “things” including their leftover lunch from Burger King. I did use the bottom to put some groceries, but I really saved it for the end.

Here is Jeb at nap time: 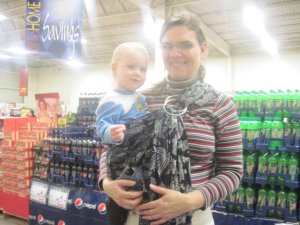 The next thing to expect is that you’re going to need more than one cart. I pushed the boys and pulled a cart. At aisle 8, the cart was full and I had to park it and get another one. 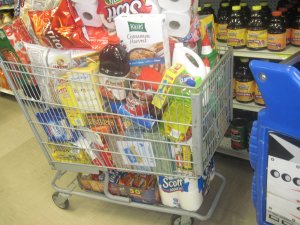 If you use coupons, you need to be organized with them. I organize mine by how items are grouped in the store so that when I get to a specific aisle, I can pull out a stack of coupons instead of a huge binder and just quickly sort through them. I only bring coupons that I’ll actually use. Our local paper does not have a Sunday issue, so to get full advantage of Sunday coupons, I use CouponMom.com. I collect coupons for several weeks before my planned excursion.

I go down every single aisle, even if I don’t think I need something. Because chances are good there’s something that’s not on the front of my mind that I’m going to see when go by it and realize that I need it (an example from yesterday: oven cleaner.) 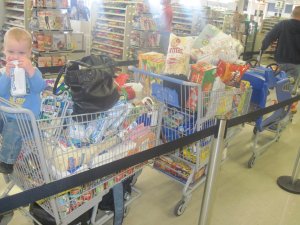 I filled 3 carts (though in fairness, one of them was the little cart the boys were in and that only had meat in it.)

My total was $1,016. That’s a large number. It’s hard to spend money on groceries with a number that requires a comma separator. But I saved $17 with coupons (which isn’t “a lot” in terms of what I spent, but because I don’t use a lot of pre-packaged items, there often aren’t coupons available for what I do use – and I don’t buy something just because I have a coupon), and other than a weekly trip for produce and milk/eggs/etc., I won’t have to go grocery shopping until sometime in January. Basically, I spent $340 a month for the base staples and meats for my family of 5.

The boys were amazing. More than one person stopped me to “congratulate” me on having such well behaved children. That always makes me happy. Here we are letting them shake their jiggles out before our 2-hour ride home: 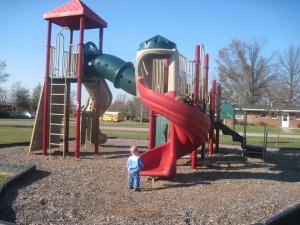 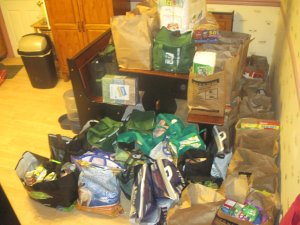 The important thing is to start with a clean storage area. Clean out your refrigerator before you go. Straighten your freezer, organize your shelves.

I am blessed in that I have a huge laundry/utility room. We’ve put shelves in there that allow me to stockpile in large amounts. 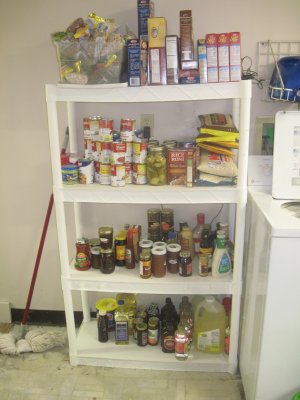 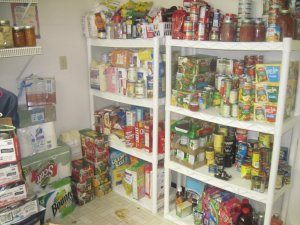 The shelves are organized and at a glance, I can easily tell what I have, what I need, what I don’t need.

In my freezer downstairs, I keep dinner meats. 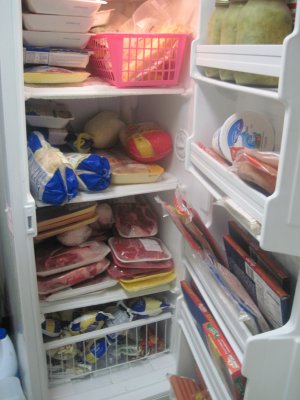 In the freezer upstairs, I keep breakfast meats. 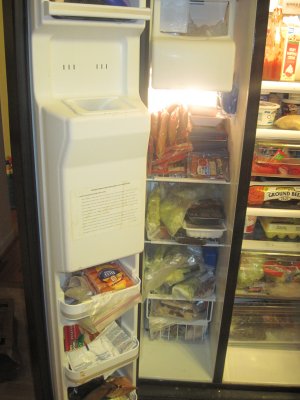 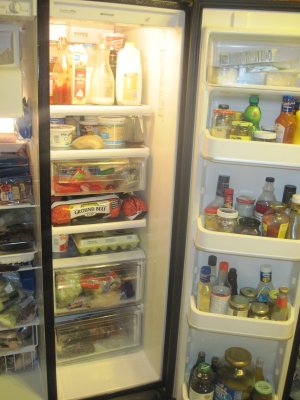 Notice in the fridge those big bulk hamburger meats? Today I will weigh them and break them into 1-pound packages, then use my seal-a-meal and seal them for storage in the downstairs freezer. I saved 80 cents a pound buying the meat that way.

And, I’d like to thank you sincerely for reading this blog. It’s because of you that I got all of my groceries put away last night – so I could take pictures. Putting groceries away is the only chore I like less than laundry – and that’s saying a lot. :-)