Creation: A Deer with a Dream of a Long Neck

Science is the study of the natural world. Many dedicated scientists work hard, improving life for us. For the last 150 years, their discoveries have provided no worthwhile evidence supporting Darwinian evolutionary theory.

Premises are important. These are the concepts by which scientific facts are interpreted. Darwinists go to great pains to explain scientific discoveries in the context of the mid-19th century theory, Darwinists grandly refer to as “evolution.” Darwinism has formed the foundation for many other theories, which also are not founded on scientific facts.

Restating them again, here are the two premises on which the various theories of evolution are based:

This is the evolutionary formula for evolving a universe:

This is the evolutionary formula for making life: 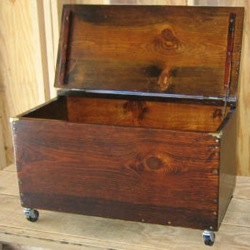 Darwinists theorize that the above two formulas can enable everything in the known universe to make itself—with the exception of man-made things. Complicated things like wooden boxes with nails in them, or balls of yarn, or water balloons require a great deal of thought, planning, engineering, design, intelligence, and careful workmanship. But everything else in nature, the ridiculously simple organisms like hummingbirds, giant squid, or grizzly bears — and the incredibly simple structures found in nature like the human eye, DNA, or a dog’s sense of smell — is declared to be the result of accidental mishaps, random confusion, chance, undirected accidents, and time.

Somehow, nature doesn’t even need raw materials to begin with, either. They make themselves without any assistance, too.

Though it may be utterly nonsensical, Darwinism has greatly affected—and damaged—mankind in the 20th century. Darwinism, much like mutation, does not ADD any new information to the collective knowledge of mankind. Instead, it reduces our intellect, our understanding of God’s amazing creation, and our sense of purpose in this life. The social and moral impact that Darwinian concepts have had on the modern world has been enormous. 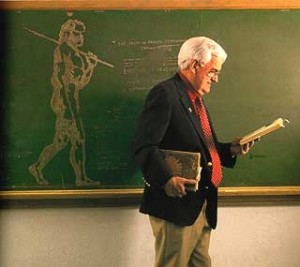 Morality and ethical standards have been greatly reduced. Children and youth are taught in pubic school that they are merely an advanced level of ape, and there are no moral truths. Since they are simply animals, they should do whatever they must to survive. Personal survival and success come only by rivalry, strife, and stepping on others. This breeds selfishness and contempt for our neighbors on a grand scale.

Girls are taught that their animal ancestors bred with as many “fit” males as possible as a matter of evolutionary imperative. Males, likewise, are taught that their ancestors “spread their seed” with every viable breeding partner. This removes intimacy and love from life long partnerships by reducing God’s creation of sex to the level of a simple biological function that rests in importance and meaning somewhere between blowing one’s nose and laughter.

How did we get into this depraved and ignorant state? How is it that men and women with letters like PH and D after their names believe that nothing can make everything, rocks can make life, and single cells can decide to split into different sexes and find something to eat, then get married and grow up into human beings?

The battle against truth has always raged in the ranks of man. But the earliest accepted anti-truth was espoused by a gentleman by the name of Jean-Baptiste Lamarck.

The early 19th century saw the birth of Lamarckism, which postulated that acquired characteristics, such as the development of a lean physique from exercise or the loss of a limb from amputation, could be transmitted from one generation to the next. Lamarckism was used to explain the “evolution” of physical features unique to certain animals, such as the long necks of giraffes.

The notion of Lamarkism is that a short buck is going along doing deer things and then decides that he wishes he were taller so he could eat the leaves off the top of the tree. So buck stretches his neck as far as he can. Armed with his willpower and his dream of a longer neck, buck and his wife, doe, have a fawn with a slightly longer neck and slightly longer legs. Now, buck and doe have to pass the dream of greater height on to their children and so on. So Buck and Doe’s great-great-great-grandchildren are giraffes because generations before, Buck and Doe had a dream and 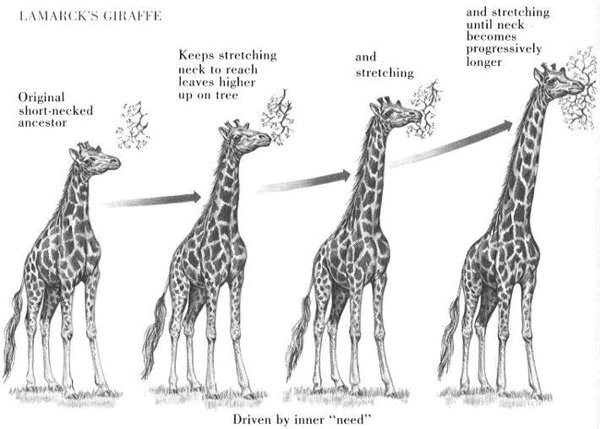 stretched their necks out way far. And they lived happily ever after.

Does this sound like science to anyone reading this?

Yet this is what Darwinism preaches every single day in our public schools. That a fish decided that it was no longer content to live in a water environment for which it was perfectly suited. Instead, the fish thought it would be a good idea to breath air and walk around on its flippers. It had a dream, you see, did our noble fish. And the fairy tale continues until the fish grow feet and lose their scales and turn into birds and apes and what not. Oh, and the apes dream of opposable thumbs and of walking upright on the ground, but only some of them do while others remain, inexplicably, apes. This, in spite of the clear evolutionary advantage offered by thumbs and reason and so forth.

Seriously? This is SCIENCE? And when you put it into those simple terms, does it not sound, frankly, idiotic?

The Truth about Long-Neck Deer: 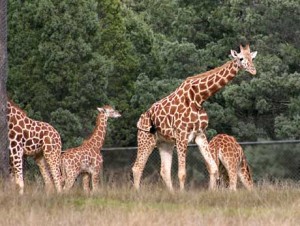 Allow me a few sentences to chase a rabbit here and tell you the astounding differences between a giraffe and a deer. A giraffe is 17 to 20 feet tall and his heart pumps blood to every extremity — especially UP against gravity to the brain — at enormous PSI through amazingly engineered blood vessels. When a giraffe ducks his head to drink, his head sitting on the end of those blood vessels in a straight line all the way back to his heart is like the cork in the end of a clown canon. Yet, somehow, his head doesn’t get blown clean off — flub-flub flub-flub KerPOW! — by that enormously strong pounding heart.

This is because those blood vessels constrict the moment his neck exceeds a certain angle. In addition, there is a sponge-like structure just underneath the giraffe’s brain that keeps the brain oxygenated while he drinks his fill. How is it that the first long necked deer leaned down without having yet “evolved” these kinds of structures and yet he survived? And once his heart blew his head off, how would he pass that fitness lesson on to subsequent generations? “Hey, kids! Grow spongy stuff under your brain and complex valves in your neck veins and arteries or you’ll end up dead, just like me!”

Then the giraffe stands up and doesn’t pass out from lightheadedness or die of stroke. Ever stand up too fast and feel buzzy? And I’m betting you aren’t 20 feet tall. All of those complicated structures work in perfect union to ensure our giraffe eats leaves from the top branches a few seconds after he wets his whistle.

The sad thing is that Lamarckism was shown to be the idiocy that it is in the 1850s.

August Friedrich Leopold Weismann (1834-1914) was a German biologist who disproved Lamarck’s notion of “the inheritance of acquired characteristics.” He is primarily remembered as the scientist who cut off the tails of 901 young white mice in 19 successive generations; yet each new generation was born with a full-length tail. The final generation, he reported, had tails as long as those originally measured on the first.

Weismann also carried out other experiments that buttressed his refutation of Lamarckism. Weismann’s discoveries, along with the fact that the ritually enforced circumcision of every Jewish male ever born for 4,000 years has not affected the human foreskin for example, doomed Lamarckism before Darwin ever published his first racist diatribe.

Yet Lamarckism continues today as the unstated philosophical basis of all Darwinian evolutionary biology.  While admittedly lacking in either proof or reason, Lamarckism nevertheless excuses Darwinists from contemplating the possibility that nature espouses implications outside of Methodological Naturalism. A notion thus entertained might even lead one of the Darwinist faithful to a different worldview outside of secular humanism. 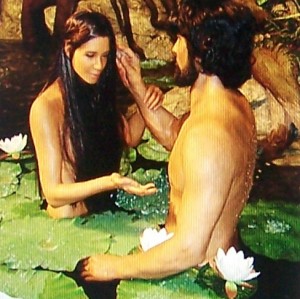 In fact, in my non-secular, non-humanist opinion, a human being is a thing that is fearfully and wonderfully made, crafted from dust by the very hand of God who breathed life into man*, SPIRITUS, the divine wind, and created man to live forever in a perfect world.

* The word “man” used properly encompasses the only race in the known universe, that being the race of man. Contrary to feminist dogma, the word “man” is an inclusive word, because when God created MAN, male AND female created He them. I always use the word “man” in that inclusive context, and if it constipates a few feminists who want to wag their fingers, all the better.