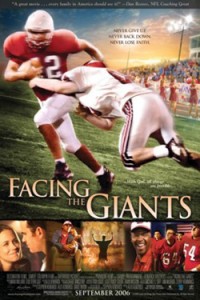 The first time I ever saw a film by the Albany, Georgia, Kendricks brothers’ Sherwood Pictures, was in 2006 when we saw Facing the Giants.  Some of you may remember the ratings controversy over that film.  What the massive media response to the controversy did was to inspire a bunch of Christians to purchase tickets to see the film — Gregg and I included.  We didn’t know anything about it, other than that it had a Christian theme, and we went on Saturday night with our 9-year-old daughter and watched it.

The acting was not great.  The budget was obviously tight.  The story was phenomenal.  Five minutes into the movie, you forgot the not great acting and the bad lighting and were just simply swept into the story.  At the end, Kaylee was sobbing.  “I don’t know why I’m crying,” she’d said, “I’m so happy.”

That movie made us Sherwood Pictures fans forever.  We found and bought their first film, Flywheel.  Very similar to Facing the Giants with the acting and the budget, but the story and the theme were beyond impressive.

When Fireproof came out, we were so excited to see some bigger names.  At the time, Gregg and I were in a really bad spot, marital-wise.  We were in that “pretend everything is okay and just go on like normal” phase, but everything wasn’t okay – everything was terribly wrong.  We sat next to each other in the theater, gripping hands, each of us with tears running down our faces,  feeling almost like the film was made for us.  A couple of years later, I facilitated a class in our church and studied a study guide that was created from the movie and the book The Love Dare.   I blogged about it in my post titled Time. 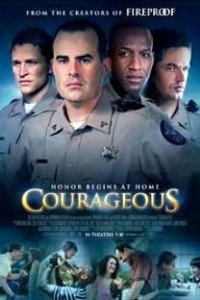 When we heard that they were making Courageous, we knew we’d go to see it regardless of the plot line.  Every movie they’ve made has impacted our lives in a positive spiritual and emotional way.  So, seeing it was a given.

I have to tell you, I saw it twice in two days, and this movie is phenomenal.  The BEST movie Sherwood Pictures has ever produced.  The acting is great.  The budget is obviously not as tight as before.  The story is positively gripping.  I laughed and cried my way through the entire  thing.