My ex-husband was unwilling to do anything on his end to prevent pregnancy, so I was on birth control pills.  I found out I was pregnant one morning in early 1996.  A few days after finding out I was pregnant, something incredibly bad and beyond the typical stress of my stressful life happened and the next morning, I started bleeding.  It wasn’t long before everything was over and I’d lost baby number one.

About a month later, maybe two months, I found out I was pregnant again.  I hadn’t tried to get pregnant, but I was excited.  My mother-in-law bought presents.  I shifted into maternity clothes.  I had doctor visits.  My husband had a job for several months – very untypical.  Life was going really well.  One morning, about 20-weeks pregnant, and halfway through the pregnancy, I felt like something was wrong.  I called my doctor, who had seen me just the day before.  He told me he was certain everything was fine, but that he had an opening that afternoon if I wanted him just to put my worries at rest.  At that appointment, it was discovered that the baby had died.  “Fetal demise” they called it.  A surgery was scheduled the next morning to remove it.  They caught the death early enough to be able to autopsy the baby.  It had an extra chromosome and never would have lived outside of my body. 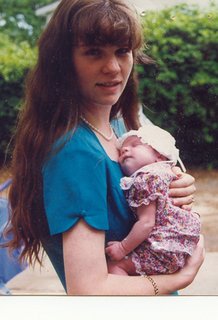 I had no intention of going through either experience again.  But, I was pregnant again so quickly that I never even had a menstrual cycle.  This pregnancy, my (ex)husband did not acknowledge.  He acted like nothing new was going on our lives.  They monitored the pregnancy closely and offered to do a test on that baby’s chromosomes.  I refused.  I figured, either way nothing would change my pregnancy – I would not abort even with a positive test.  My doctor respected my decision and did not press, but cautioned us that if this baby had the same chromosomal disorder, as it likely would, it would not live more than a few minutes outside of my womb.  My husband eventually and cautiously acknowledged the pregnancy.  I had a baby shower, but kept everything in the packages and bags in case I needed to return things to people.  We decided on a room in our house for the baby’s room, but didn’t set up the crib or unpack the shopping bags.

When Kaylee was born, full term, natural birth, weighing 7 pounds, 4 ounces, we didn’t count fingers or toes.  We watched her take one breath after another, after another.  At some point we stopped watching her breathe and realized that she was fine.  Perfect.  Perfect and beautiful and healthy, all of her chromosomes in place.  We couldn’t believe it.  My doctor had grown very close to me in those weeks and months and choked back tears with us.

When Kaylee was three months old, I discovered that I was pregnant again.   This was pregnancy number four, and not a single one was planned.  At ten weeks, I started bleeding unexpectedly.  My doctor told me there was nothing he could do for me.  I went home and labored through the night while my husband, in a move to emotionally shield himself from it, slept.  Around four in the morning, I lost the baby.

A few weeks later, I went to the doctor and told him I couldn’t do it anymore.  I asked him to give me a tubal ligation.  He readily agreed and we arranged for a surgery date.  At the pre-op, my pregnancy test came back positive.  A week later, I lost that baby.  The doctor pushed his schedule forward to get me scheduled for a surgery before the chances of my getting pregnant could happen again.

The morning that my ligation was scheduled, there was a hurricane hitting the panhandle of Florida.  All elective surgeries were cancelled.  My doctor called me and told me that my surgery wasn’t cancelled.  We drove to the hospital in the midst of black skies and heavy wind.  They were able to do the procedure, and by two-o’clock that afternoon, I was on my way home again.

It was a relief not to have to worry about my birth control pills working anymore.  I can’t tell you how happy I was that everything was finally taken care of.

When Kaylee was 4, her dad and I divorced. 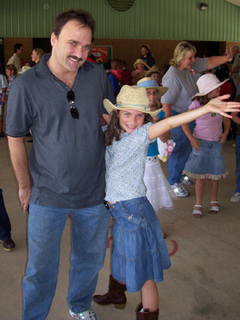 At one point in conversations with Gregg early in our early relationship, he told me how much he had always wanted to be a dad, but had at one point in his life fully given that over to God.  I talked about it briefly in The Power of a Praying Wife: Chapter 25 – His Repentance.  I clarified to him that I could never have anymore children.  He assured me, over and over again, that it didn’t matter to him.  When we got married, we were sure that Kaylee would be our only child.

Two years after we were married, I felt a longing inside of me to have a child like nothing I’ve ever felt before.  It was all I could think about.  I would see a pregnant woman and just cry over my physical inability to be pregnant myself.  I don’t know how to explain how this perplexed me – because I hadn’t had a single good experience with pregnancy – until after Kaylee was born and she actually survived.  I started looking up information on in vitro fertilization.

Gregg saw some paperwork I had printed out on it and approached me about it.  He said that with my pregnancy history, he didn’t want so much money and emotional investment put into something that likely would end in a bad experience.  He told me to really pray about it and that we would address it again.

While I was praying about it, I was doing internet searches and discovered a clinic not far from our house that specialized in tubal ligation reversals.  This really piqued my interest.  I took that to Gregg and he said that we should pray about whether to save money to have it (this was an EXPENSIVE surgery that insurance wouldn’t come close to touching) but wanted me to understand that he was completely content with just having Kaylee.

Not long after, he was interviewing for a job.  During the course of the interview, he and his perspective employer talked about wives, children, pregnancies, problem pregnancies, and eventually this procedure.  The next day, this gentleman called Gregg and said that he and his wife and talked about it the night before, and they wanted to hire Gregg and pay for this procedure.

In January 2005, we checked into a hotel room in Gainesville, Georgia, and went to the surgical clinic.  Even with a few complications that had the surgeon working about twice as long as he expected, the surgery was a success. [As an aside: the surgical clinic, staff, and doctor were EXCELLENT — if you’re in the southeast and researching the procedure, contact me and I will give you their information.]

The recovery time was extremely difficult.  I recovered in a hotel room instead of a hospital room.  It was actually a terrible experience.  I was in a lot of pain, and I worried constantly about Gregg having to nurse me.  I’m a very apologetic patient and feel bad when someone has to wait on me.  For three days, we stayed in that hotel and Gregg waited on me hand and foot.  He was amazing.

In March, I found out I was pregnant.  In April, I lost that baby, too.  I couldn’t believe it.  But, this need I felt to have a baby didn’t diminish even with that loss.  In January – a year after my surgery – we found out we were pregnant with Scott.  At 21-weeks, I realized that I was in my seventh pregnancy, and had been pregnant longer only one other time.  By 28-weeks, I was on full bedrest, and Scott was born at 30-weeks.

A few months after Scott was born, we went to see a specialist, who ran test after test after test on me.  His conclusion was that my reproductive system is textbook perfect and that there is no medical reason that was known to him for my continual loss, nor for my problems during Scott’s pregnancy.  He gave us the go ahead to get pregnant again.

It took a while to get pregnant with Johnathan, because Scott nursed every 3-hours even as he approached his first birthday.  But, we did get pregnant, and with the doctor having the benefit of hindsight and an educated guess that there would be problems, he monitored me extremely closely.  I had weekly prenatal visits, monthly ultrasounds, and medication.  We made it to 30-weeks before full bedrest, and got the pregnancy to 36-weeks before the emergency c-section. 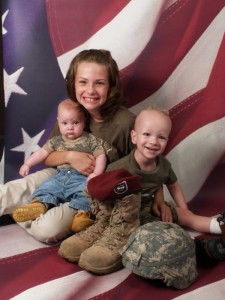 We recently celebrated Scott’s 5th birthday and Johnathan’s 3rd birthday.  I haven’t felt the need to have another baby ever again.  I believe that our family is complete as much as I believe that seven years ago, God placed the desire for a baby on my heart and in the forefront of my focus – working the timing of everything to His perfection so that we could bring these two amazing boys into this world.  What His plans are for them time will eventually reveal.

But I know that all of the loss, all of the heartache, and all of the physical pain that I went through leading up to and beyond the reversal – all of the troubles in pregnancies and worries over problems and “what if’s” were worth it – and I’d do every bit of it again if it meant these three children would still be mine and Gregg’s.