Last week, I had poison ivy on my hand.  Within the mess of allergic reaction, a sore appeared.  I thought one of the poison ivy bumps got infected, but apparently it’s something else.  Yesterday (Tuesday) I posted a picture on Facebook, and a huge discussion ensued – words like “brown recluse” and “staph infection” were bounced around.

Just the thought of a brown recluse spider bite makes my stomach hurt.  Staph makes Kaylee almost hysterical.  After she saw the conversation posted on Facebook, she called me so upset.  “That’s what so-and-so’s sister died from!” she said in a panic.  I calmed her down.  Aside from the queasy thought of arachnids, I feel fine, and used that as the catalyst to soothing her fears.

After getting off of Facebook and talking my daughter off of the proverbial ledge, I went to make breakfast.  Turkey ham and cheese omelets were on the menu.  When I opened my fridge, the two dozen eggs I bought the night before were not there.  I went out to my van – not there, either.  I was quite flabbergasted.  We had fried turkey ham steaks and toast for breakfast, and I made a mental note to go buy eggs.

The same day, I had repairman came to my house to fix my dishwasher.  This dishwasher we bought at Lowe’s.  It was quite expensive.  Almost $700 plus installation, but we thought that it would be the last dishwasher we would have to buy for a long time.  The repairman said the dishwasher is working fine – the problem is that it’s been installed incorrectly.  The drain hose wasn’t where it should have been, it got crimped, and developed a hole.  That hole leaked water for the last 18 months into the floor under the dishwasher and into the cupboard below my kitchen sink.

Now the floor is so soggy under the dishwasher that it moves, and there is mold growing in my cupboard under the kitchen sink. 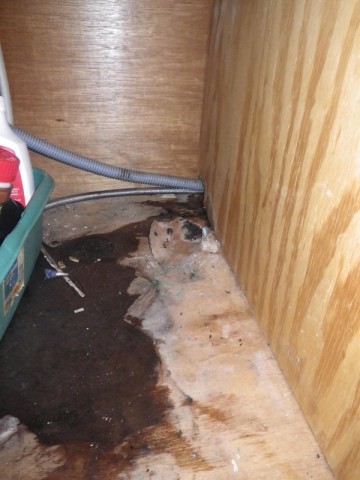 The reason I had no idea what this looked like is because this is what we had to take out of that cupboard for the repairman to get to that place: 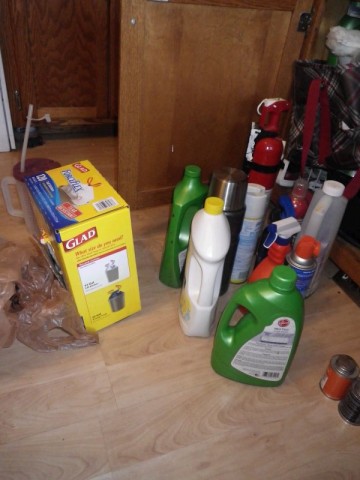 I called Lowe’s and had the man who answered the phone speak to the repairman, who made it quite clear that the entire problem was the incorrect installation.  He even said, “Get out the manual and turn to page 8.  That’s the proper installation.  Not what I’m looking at here.  The men who installed it obviously didn’t look at the installation guide or they never would have done what they did.”  The man from Lowe’s said his manager would call me back.

After the repairman left, I was making lunch for my kids.  As I was slicing bread, I was thinking of all of the things that could be wrong with my hand – staph infection, spider bite – and thinking about dealing with the floor and the dishwasher and the cupboard and my hands started shaking and a panic feeling started welling up inside of me.

This has happened once before.  In 2003, when Gregg came home from his first tour in Afghanistan, about two days after he got home I had a total collapse panic attack.  The weight of handling everything just crashed in on me and for some reason, I broke down.

For a minute, I stepped aside and had to close my eyes and breathe, slowly, and calm myself down.  The time until Gregg’s plane arrived seemed interminable, almost imaginary.

Calmer,  I served lunch, then I left the kids with a friend and went to my doctor’s appointment for my hand.

The doctor’s first thought was brown recluse spider bite.  But, there’s a telltale black center that doesn’t exist on my sore, so he’s not treating it as that.  He’s treating it as, “It’s obviously infected, but I don’t know what it is, so we’re going to try a few things.”

This called for action.  At the pharmacy, I bought some therapeutic medication.  I had it consumed before I drove the 1.8 miles to my house. 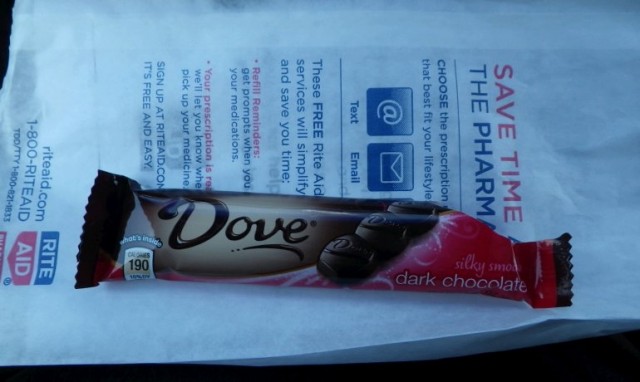 Within minutes of getting home from the doctor, I spoke with the manager at Lowe’s.  She says that it’s been 18 months and their warranty is 12 months.  So, too bad on us.  “You should have known there was a problem,” the manager told me.  Yeah.  I ‘should’ have known.  She’s obviously never met me.  What do I know about dishwasher installation and the proper placement of hoses, and why should I know when I paid them $119 to know for me?

As I was reading through the installation warranty information I had (because while I may not know a thing about drain hoses, I’m all about paperwork – and I got paperwork) my friend, who is totally awesome and was making Kaylee’s bed for the company I had coming this weekend, came into the kitchen and asked what Lowe’s said.  I tried to speak and totally broke down.

I had about a thirty second crying jag.  She hugged me and said, “I would have broken down a year ago.”

I wiped my face clean and said, “It doesn’t do any good.  Nothing productive just happened.”

She knows me too well to argue about how good crying can make you feel, etc., because that’s not me.  Instead, she smiled and loved me anyway.

Calmer, dark chocolate in my system, 30 second crying jag, nothing more could possibly go wrong today kind of mentality, I was fine.  FINE.  I reached my limit, broke, and now I guess I have a new limit.

It took 20 minutes on the phone with Delta, a $199 fee, and he’s reconfirmed and coming in 16 hours later than originally planned.  And that’s okay.  He’ll make it in time for the boys’ birthday party, he’ll see the family coming in from out of town, and he’ll be HOME.

And, I really really really can’t wait to hand him a phone and let him handle Lowe’s.  Because he’s much better at such things than me.