On the last day of school, we had Kaylee’s “Annual Summer Starts Now Luau Bash”.  I don’t know how many girls ended up coming as they came and went all night, but at breakfast the next morning, we had eleven.

I decorated our Florida room with a lei garland intwined with white light strands.  Then, utilizing some fun decorations I found at The Dollar Tree, I hung a parrot, flamingo, and palm tree from the ceiling.  At the same store, I found some window clings and table decorations, and table skirts that had a lei feel to them.  From a mail-order catalog, I bought a palm tree that was a drink cooler. 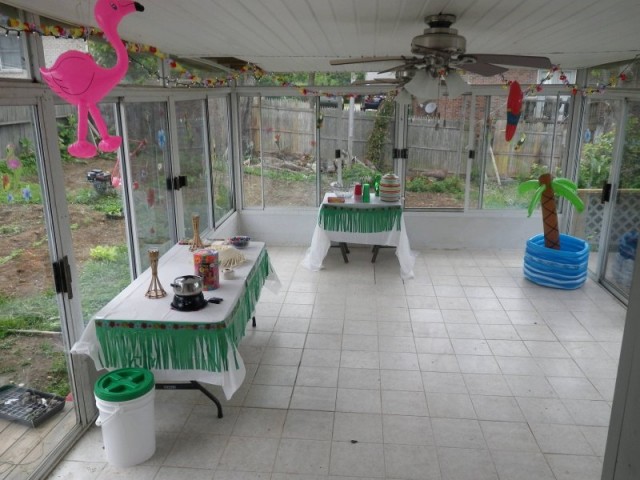 All in all, I spent no more than $50 on the decorations.

I wish I had better pictures to show you, but a friend’s 9-year-old daughter took pictures for me while I was doing other things, and then I wanted to just leave Kaylee alone with her friends.  I only interrupted them when it was time to replenish food bowls.

I kept the island theme with the serving dishes:  surfboard shaped plates, straw hat for popcorn bowl, coconut shells for the salsa. 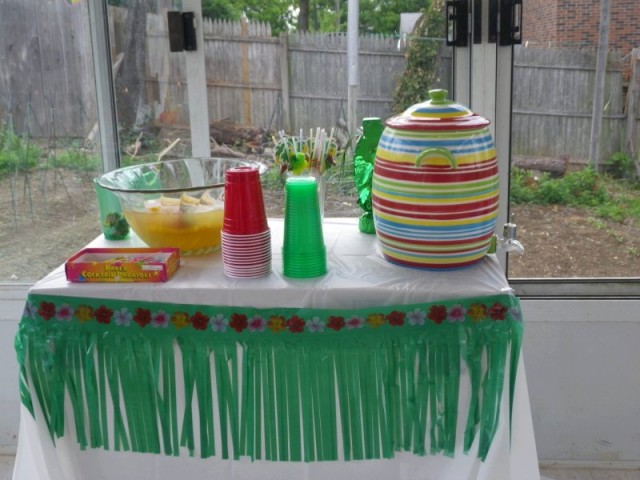 For drinks, I had a variety of natural sodas in the cooler as well as a punch I made with pineapple juice, white grape juice, and sparkling apple juice.  For an ice ring, I used a gelatin mold and froze strawberries and orange slices in the white grape juice.  It was beautiful when it was in the punch.  I also had lemon aid in the striped drink dispenser.

Food was simple: a vegetable tray with homemade ranch dressing, a fruit tray (Kaylee wasn’t happy with the lack of tropical fruit assortments – but, we’re Florida natives and Kentucky stores don’t offer the same fare this late in the spring), hot wings (pseudo homemade – cut chicken wings into buffalo style and baked them, then tossed them with Frank’s Buffalo Sauce), chicken kabobs with red onion, yellow & orange peppers, and fresh pineapple over brown rice, and a variety of finger foods like popcorn, M & M’s, tortilla chips with salsa.  I also made some pinwheels using roasted red pepper & basil tortillas, cream cheese, fresh basil, and fresh spinach.  They were a huge hit. 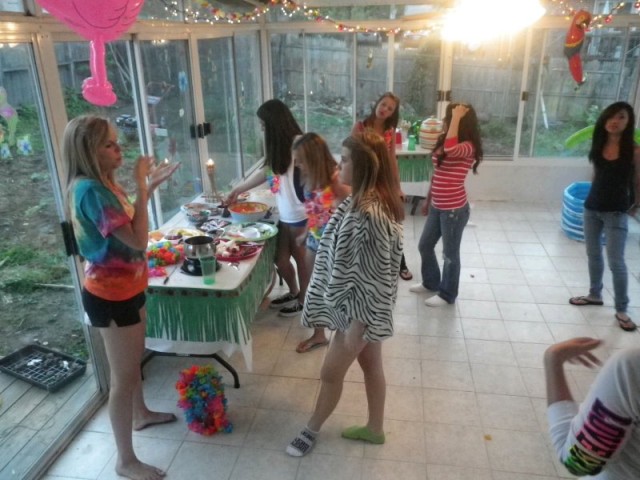 As the evening wore on, I brought out chocolate fondue (dark chocolate chips mixed with heavy cream) and served that with strawberries, fresh pineapple, and angel food cake.  Apparently, the girls tried all sorts of combinations and determined that popcorn chocolate fondue is a new party favorite.

We set up a table with an iPod player and a CD player.  The girls were in charge of their own music selections, which means the same three Justin Bieber songs pretty much played all night long. 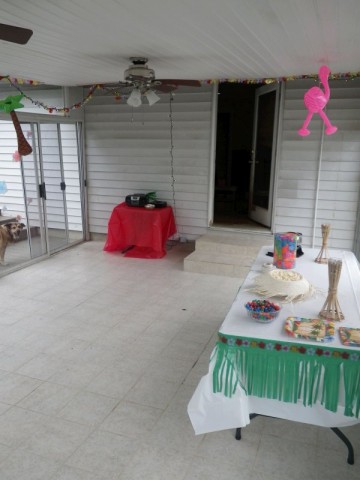 It was an incredibly successful party, and was kept to a simple minimum.  I thought about and discarded “island” games, and thought they would just have more fun listening to music and being fourteen.

The next morning, I served chocolate chip waffles with chocolate whipped cream and beef bacon.  I also served a big pot of coffee in my coffee service set – the girls felt very grown up and very elegant drinking out of cups and saucers and using little spoons to stir their cream and sugar.

As the girls left throughout the day, they were all already talking about next year’s last day of school “Annual Summer Starts Now Luau Bash.”  It was a lot of fun to throw, and I’m looking forward to doing it again next year as well.