Every Sunday, my clever husband offers me a “day of rest” by writing posts on the subject of his primary ministry. This is a topic that is gaining more and more attention in our modern culture. The topic, Creationism vs. Darwinism, is a subject that has broad reaching scientific, social, and metaphysical implications.  For believers and non-believers alike, the primary purpose is to present scientific, historical, logical, and/or sociological data in an empirical fashion, as much as possible written in layman’s terms, and in a format suitable for supplementing any homeschool curriculum whether you choose to believe the Biblical account — or secular guesses — about the origins of human life on earth.

In the weeks ahead, I will support the following three pretty big proclaimations :

If these proclaimations prove true, then one would have to wonder why? Why the apparent complete lack of ethics? Well, to answer my own question, aren’t ethics are only useful when one is ethical? The entire Darwinian theory is without ethics or morality, so why should one expect that the theory would be defended ethically and that arguments that support it should be based in morality?

Can I show proof that the above proclaimations are true? I will use one case study and follow it through to its conclusion. My case study will be Lucy the magical Australopithecine.

Lucy, one of the most recent of the Australopithecus finds, was unearthed by Donald C. Johanson at Hadar, Ethiopia in 1975. He dated it at 3 million years B.P. [Before Present]. Isn’t that nice? Just a quick question. What calendar system uses the present moment as the reference index? Apparently, the Darwinist calendar. 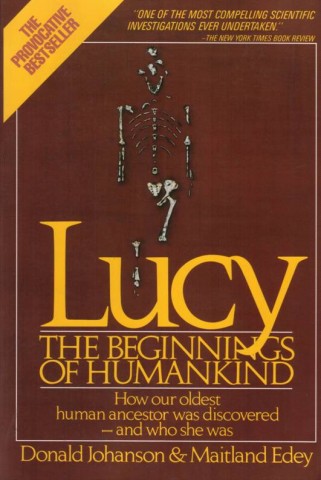 In the year of our Lord 1979 A.D. (couldn’t help myself), Johanson and his colleague, Tim White, claimed that Lucy came under an ape/man classification (Australopithecus afarensis). Immediately, Lucy became the (quote) non-Biblical Eve of evolution. The oldest known ancestor of humankind. Entire books came into print accompanied by magazine articles and front covers of the usual suspects trumpeting the end of the Biblical account of creation.

Johanson claimed, at the time that Lucy was “our oldest human ancestor” and lent his name to that claim in print, in interview after interview, and on television shows all over the world.

The convincing evidence that Johanson claimed Lucy presented was that: 1) she was the most complete early human skeleton from a single source, 2) the chest was very human like, 3) the knee was very human-like, 4) she “most likely” walked upright.

Assuming that the bones all came from the same creature, Lucy is only about 40% of a skeleton of a chimp sized animal. Complete? Significant portions of the large bones are missing including portions of the hip and skull.

However, even before that startling 1979 announcement, the situation did not look too good for Lucy.

Dr. Yves Coppens, appearing on BBC-TV in 1982, stated that Lucy’s skull was far more like that of an ape than any kind of man.

Turns out the chest bones of the Lucy find only look vaguely human if one applies a great deal of imagination. Human chests are barrel shaped and chimp chests are more bell shaped. A reconstruction without bias, like the first one performed in 1982, always makes Lucy’s chest look bell shaped.

Also in 1982, Jeremy Cherfas said that Lucy’s ankle bone (talus) tilts backward like a gorilla, instead of forward as in human beings. This, by the way, is a requirement only if one wishes to walk upright. Cherfas concluded that the differences between Lucy and human beings are “unmistakable” (J. Cherfas, New Scientist, (97:172 [1982]).

The same year, Doctors Susman and Stern of New York University carefully examined Lucy and said her thumb was apelike, her toes long and curved for tree climbing, and “she probably nested in the trees and lived like other monkeys” (Bible Science Newsletter, 1982, p. 4).

In 1984, suspicions began to surface that the bones presented by Johanson and White as one skeleton came from two different sources. What was the first clue? Well, the famous leg bones with the pivitol “human like knee” was found more than three miles away. Just how fast was that 3 million year old train going when it hit Lucy, I wonder? And the leg bones don’t jive with the arm bones at all.

So much for the knee being very human-like if it didn’t even belong with that skeleton in the first place. This reminded me of the brontosaurus fruad when skulls from one were placed on skeletons of another just to make the point.

“To complicate matters further, some researchers believe that the afarensis sample [Lucy] is really a mixture of two separate species. The most convincing evidence for this is based on characteristics of the knee and elbow joints.”

Today, most scientists are convinced that the bones of Lucy, in fact, come from two different sources. So much for the most complete early human skeleton from a single source.

Regarding those knee joints, Richard Leakey’s associate, Owen Lovejoy, declared at a 1979 lecture in the United States that a multivariate analysis of Lucy’s knee joints revealed her to be an ape. Therefore, he concluded, whether Lucy’s bones belong to one creature or two, they are both apes. This statement, I believe, was made in an attempt to quell the rising dispute over the validity of the find though Lovejoy would take part in fraudelent reconstruction of the Lucy bones in 1994 for the PBS series Nova; In Search of Human Origins, in a vain attempt to make her appear more human.

The entire theory about Lucy being a human ancestor is based on an assumption linking two fossils found more than 1,000 miles apart.

“Although the Lucy fossils were initially dated at three million years, Johanson had announced them as 3.5 million because he said the species was ‘the same’ as a skull found by Mary Leakey at Laetoli, Tanzania. By proposing Mary Leakey’s find as the ‘type specimen’ for Australopithecus afarensis, he was identifying Lucy with another fossil 1,000 miles from the Afar [in northern Ethiopia] and half a million years older! Mary thought the two not at all the same and refused to have any part of linking her specimen with [Johanson’s] afarensis … She announced that she strongly resented Johanson’s ‘appropriating’ her find, her reputation and the older date to lend authority to Lucy.”

Johanson, himself, finally decided that Lucy was only an ape though his concession did not find nearly the media frenzy of his 1979 announcement.

“Johanson himself originally described the fossils as Homo, a species of man, but soon after changed his mind based on the assessment of his colleague, Tim White. They now describe the bones as too apelike in the jaws, teeth and skull to be considered Homo, yet also sufficiently distinct from other, later australopithecines to warrant their own species.”

None of the original furor surrounding the Lucy find seems to have panned out, yet she is still described in Museums and modern textbooks as one of our earliest ancestors.

The truth is that Darwinists seem to want to go to almost any lengths to preserve the predominant thought, that molecules turned into man by a chain of random events.   When Lucy’s hip clearly showed that she didn’t walk upright, that like a modern chimp, she may have walked upright for a few steps and only awkwardly in those cases, Darwinists simply took a power tool to her hipbone to reshape it into an architecture that might work.  Check out this video:

The eternal existential questions of mankind are “Where did I come from?  Who Am I? Why Am I Here? What Is the purpose of Life?”  Darwinists and believers answer these questions in radically different ways.

Where did I come from? Darwinists claim that we came from nothing, then molecules, then apes.  Believers know that we were made in the image and likeness of God (Genesis 1:27).

Who Am I? Are you an animal with higher intelligence? Or, were you fearfully and wonderfully made (Psalm 139:14)?

Why Am I Here? Darwinists claim that we are the result of a chance accident that made our existence possible. Believers know that we are here because of God’s love (John 3:16, Romans 5:8, Titus 3:3-5).

At the end of this mortal life, what then? Darwinists say we die, cease to exist, and our bodies rot in the dirt. Believers have faith that it really depends upon our relationship with Jesus Christ (Romans 3:23, 6:23, John 3:3, 14:16, Romans 10:9). One is a life bereft of morality because there is, after all, no accountability. The other is a life of morality because of the knowledge that all will be held accountable at some time in the future. One existence is hopeless — that is, utterly without hope. The other is a life of hope based on a promise of an eternal life.

With this foundation, I will proceed to conclude this series in the coming weeks.