I came across an article this weekend that suggested that nearly 10,000 toddlers are on medication for ADHD.

Here is the quote from the article in the New York Times:

More than 10,000 American toddlers 2 or 3 years old are being medicated for attention deficit hyperactivity disorder outside established pediatric guidelines, according to data presented on Friday by an official at the Centers for Disease Control and Prevention.

The report, which found that toddlers covered by Medicaid are particularly prone to be put on medication such as Ritalin and Adderall, is among the first efforts to gauge the diagnosis of A.D.H.D. in children below age 4. Doctors at the Georgia Mental Health Forum at the Carter Center in Atlanta, where the data was presented, as well as several outside experts strongly criticized the use of medication in so many children that young.

I have a friend who has a teenaged daughter who is bi-polar and is on medication that, seriously, saved her life. But, she’s a teenager with a developed brain who can very rationally explain what she’s thinking, seeing, hearing, and feeling. She isn’t a four-year-old who has had language skills for the lesser part of two years, or a three-year-old. Or a two-year-old. She and a few other friends I can count using one hand, to me, is the rare exception to what should be the “medication as a last resort and only in the most extreme circumstances” rule. I’m not talking about them here.

Ritalin is a drug that is classified by the DEA as being a schedule II — the SAME classification as OPIUM and COCAINE.

And medical doctors are prescribing this drug to toddlers? 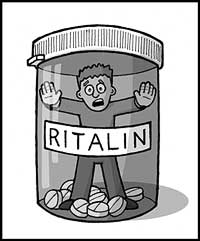 HOW did our society come to this – to the point that we throw drugs at our children in an effort to force them to behave in lieu of parenting?

And, before you come to me with, “You don’t know what it’s like –“, I have a son who, when he was seeing the psychiatrist at the University of Kentucky at the age of 4, was classified as “having issues far more reaching than simply ADD or ADHD,” and was ultimately diagnosed under the autism umbrella.

And, you know what?

He listens. He pays attention within the parameters established by us and his educators. He eats, sleeps, and behaves according to the standards set by our family. And he does it because we have diligently worked with him, with understanding how his brain functions, with monitoring what foods affect his behavior and shifting to adjust accordingly, and with a sympathetic understanding of how affected he can be by stimulated environments.

So, don’t tell me I don’t understand.

What I do understand is that my son requires a whole lot more parenting energy than my other two children. But, I’m certainly not going to throw an addicting drug onto his developing brain. 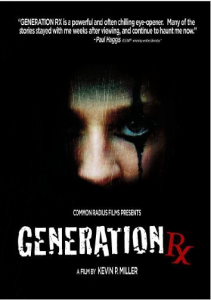 It’s bad enough that there are MILLIONS of children who have these kinds of prescriptions. But, now they’re being given to TODDLERS? What kind of attention are we expecting from toddlers, anyway? In what environment are these toddlers that require them to sit still and have to pay attention?

This article made me crazy. Seriously. I’m so angry over it that I’m having a hard time typing this.

If you haven’t seen the documentary Generation Rx directed by Kevin P. Miller, do see it. It was free on Netflix last I checked. Every single parent in the free world should see this movie and think not twice, but three or four times more, before placing their child on a mind altering drug. Here’s the trailer for it:

Seriously, watch this film. Learn about what danger these drugs are. Make informed decisions for your children.  And, in my opinion, any doctor who prescribes these drugs to toddlers ought to have his or her medical license revoked before facing criminal charges.