Ode to the mother of the autistic child who’s had every schedule in his life obliterated by the Christmas holiday and a continuous succession of snow days.

Almost immediately, I received messages and  emails, “I thought you said Scott doesn’t have Autism.” 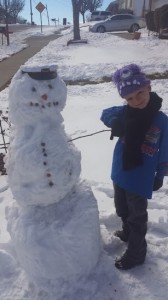 Scott was diagnosed with Pervasive Development Disorder (Not Otherwise Specified), also know as PDD (NOS). PDD (NOS) falls under the autism umbrella. However, during testing, when Scott was shown a succession of faces with emotions, he not only correctly identified each emotion, he actually empathized with them. He felt sad and responded with sadness as the sad face, etc. So, the psychiatrist said that despite being almost perfectly symptomatically autistic, he absolutely does not have autism.

However, over the course of the last two years, Gregg and I have done mounds of research and observation. We’ve watched documentaries, read books, and read articles such as this one, titled, “The Boy Whose Brain Could Unlock Autism.” 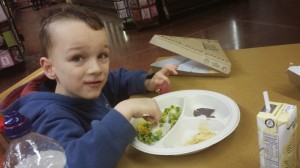 As parents who know our kids more than anyone in the world, and as rational human beings who can research and learn and theorize, we believe that Scott does have autism. We believe that if he’d had a different psychiatrist on a different day, that the diagnosis would be entirely different – because there is no perfect pattern and there is no answer guide for this diagnosis. SO much of it is relative.

Now, instead of trying to explain what “PDD (NOS)” means or is, we simply say, “He’s autistic.” Period.

What does that mean to us?  Absolutely nothing different from anything before. We don’t see psychiatrists, he’s not on any medication, he’s almost entirely integrated into the classroom with minimal special ed handling at school. He is learning how to cope and function and adjust to the world around him that is SO different to the world inside his head.

It’s just a “label” – something we wholly tried to avoid for as long as possible. Because now, just like the arrow in the Fedex logo as discussed in my post “Seeing the Negative Space“, our oldest son is seen as “autistic”. Not loving, funny, clever, or fascinatingly brilliant. Just autistic. Some people are willing to get past the negative space and discover the boy beneath, and some aren’t. Unfortunately, it will be like that his entire life.