An Aria for Nick 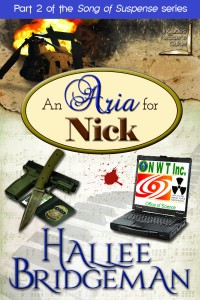 I haven’t done much in the line of marketing An Aria for Nick. I released it in mid-November (not a great idea – most of my market is too busy that time of year to read) and almost immediately got to work writing Christmas Diamond. Since that book was for Christmas, I kind of turned all all of the attention to that little novella.

But, while I’ve not been talking much about it, people have been reading it, and the feedback has been overwhelming. Here is a review I received earlier this week:

Every time I finish one of Hallee Bridgeman’s novels, I think she’s reached the peak of storytelling and the next one can’t possibly be as good. And then every time I read the next one, it’s even better than the one before! This story kept me up late reading because I could not bear to stop. The non-stop action and hectic pace leave you breathless but never overshadow the building relationship between Aria and Nick. These characters, both with devastating pasts, never waver in their faith in God, yet still maintain absolute believabilty in their circumstances. They feel pain and loss, struggle with forgiveness and trust, and fall in love while living out a Christian lifestyle in very real ways. I’m already looking forward to the next one!

If you are looking for an exciting, turn-your-page-as-fast-as-you-can story, An Aria for Nick is absolutely the story for you.

Here is a never before seen excerpt from An Aria for Nick:

THE agent code named Hecate, called Kate, stared down at the sleeping man. His round body lay curled around a pillow and he regularly mumbled in his sleep. She reached over and slapped at his shoulder. “Wakey, wakey, Ricardo.”

The small man jerked awake and gave a startled cry. When he saw Kate standing over his bed holding a gun on him, he sat up and scooted quickly back against the headboard.

“Shh,” Kate explained, smiling as she put a booted foot up on the bed and leaned forward. She had to keep herself from gagging at the stink of the breath panting in and out of his open mouth. “I’ll do the asking.” For her own health and well being, she straightened some and put a little bit of distance between them. “Now, a man and a woman came to you a couple of days ago. She had long dark hair and they probably didn’t speak much English. Know who I’m talking about?”

“It’s anything,” Kate corrected. “As in, ‘I don’t know anything.’ But it’s a common misuse. Now, tell me, what names did they give you, this couple? Carlos Garcia? And what was the girl calling herself?”

Ricardo crossed his arms and stared down the barrel of the pistol. “I … don’t… know …anything. Comprende?”

Kate reached into the boot she wore on her foot she currently had propped up on Ricardo’s mattress and slowly withdrew a long knife. “Oh, my. How very impressively macho,” she observed, clucking her tongue. “I see I’m going to need to jog your memory. I bet if I surgically removed the source of some of that machismo it might just help you to recollect some details.”

Ricardo looked into her eyes and realized that he did not want to proceed further down this conversational path, not with this woman. He held both hands up and whispered, “Florida. I took them to Florida.”

“Better,” she said gently as she resheathed the knife. “Now, I bet you remember where you took them in Florida, don’t you?”

Song of Suspense 2: An Aria For Nick 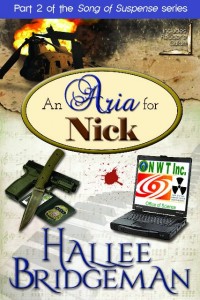 An Aria for Nick: book 2 in the Song of Suspense series

An Aria for Nick is the second book in a set of Christian contemporary romantic suspenseful thrillers from best selling inspirational novelist, Hallee Bridgeman. The exciting new SONG OF SUSPENSE series continues everywhere fine books are sold November 7, 2013 with book 2, An Aria for Nick.

An Aria for Nick can be purchased in e-book format at Christian book online retailer Deeper Shopping.

An Aria for Nick is also available at the following booksellers:

An Aria for Nick can be purchased in paperback at the following places:

Ask your local library to order this title:

The Only Man Who Can Save Her Life Has Been Dead for a Decade.

Raised in a loving home, Aria Suarez dreamed of becoming a professional pianist happily married to her high school crush. After the only boy who ever caught her eye dies a hero’s death and her wrist is shattered along with her future plans, she turns her brilliant musical mind to nuclear engineering and solving mysteries of science.

Abandoned to an abusive father at five, Nick Williams grew up dreaming of escape; of enlisting in the Army and leaving his wretched life behind; of proving himself worthy of the girl he loves. But the crucible of combat offers only the escape of death.

A decade later, Aria uncovers a nuclear plot that threatens the heart of our very nation. Sinister forces surround and threaten her when, out of nowhere, the man who reportedly died so many years before returns as if from the grave — intent on protecting her.

Or is Aria doomed to mourn Nick twice?