My friend Gabrielle has a beautiful 4-year-old daughter named Marion.  Several months ago, Marion began having serious behavior problems.  She was having major temper tantrums several times a day, had pretty severe anxiety, was very angry, and just generally acting out.

Trying to get to the bottom of it, Gabrielle and her husband made a few changes around the house: they pulled her out of preschool, removed television and got rid of most of her toys.  The result was a night-and-day change in her behavior.  Gone was the anxiety, the tantrums, the anger.  In its place, Gabrielle had a content 4-year-old who learned how to entertain herself (and her little sister).

I am such a fan of simple lifestyles and feel like kids today are so over-stimulated, over-entertained, and over-scheduled.  I LOVED hearing about the changes in Marion and wanted to share them with you.  Gabrielle was so gracious to allow me to interview her. 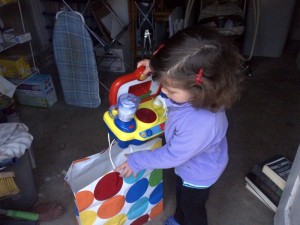 Please give us an idea of what life was like before you made the changes you made.

I always wanted to make our lives simple.  I always encouraged my 4 year old Marion to be as creative and active as possible. I made a very early choice in the beginning that my child would watch little TV and keep it to educational child programs.  I never wanted to go overboard with electronic toys like using those handheld devices and using the battery operated toys. I kept to my TV rule of less than the recommended amount of 2 hours a day max.  So what life was like before I made the changes? Well, she always had watched little TV, but I never gave her the benefit of the doubt when it to the challenging parts of the day such what to do so I can take a shower, make dinner, or have to clean something. I thought that TV would have to be there to help me instead of realizing that perhaps she really could do it without TV.

As for the toys, they just piled up over time. They were great toys, I but had wishful thinking that she may just need them that day to play with.  Things became stagnant. I was becoming less organized and never moving on to projects that I always wanted to do. Ever want to move furniture or organize something, but just never do it? It’s that itch that you eventually can’t ignore.

Marion was getting bored and showing lots of frustration. Her tantrums began spiraling out of control and we were dealing with about 4-5 of them daily. There was lots of anxiety. Very little cooperation and focusing with us. It was overwhelming at times.  Marion has always been what parenting experts what probably described as the “strong-willed” child. Her will is very strong and so are her feelings.  I kept telling my husband that maybe we just don’t have her enrolled enough programs or something. She was already in preschool 3 times a week for a half day. We decided to enroll her in a swim class with mommy and then soccer on Saturday with Daddy. I could tell she loved her alone time with us since the arrival of her little sister, but we still were not getting the positive behavior that we really wanted to see.

What did you do specifically?

One day I decided that if I really wanted to get positive behavior that all of us as a family were going to need to buckle down and take care of things. This all started by looking at our own goals and figuring out better ways to be organized. So I first examined my home and my arrangements and realized I needed to make great changes myself.  So I did. My husband, who is a great man but an introverted computer programmer also had to make changes in his communication with us. So we first started with ourselves making our much needed changes.

Then I examined my daughter’s situation. There were so many tantrums and uncooperative behavior that I realized whatever we were doing now just wasn’t working. I usually do the punishment of “ you must pay a fine by taking away a toy” for bad behavior.  But I examined the situation and thought maybe there were just too many toys to begin with.

I actually came to Marion one day said, “Do you know why we got this postcard in the mail?” She said, “No mommy, who is it from?” I told her that it was from people who did not have any clothes or toys because they have no money and now they are asking if we could some of our toys and clothes to them. Marion actually had this big smile on her face and enthusiastically told me, “Yes, mommy let’s give them something.” So we ended up donating about 5 full bags of stuff. About 25% of her toys were gone and since at the time, I was trying to correct her bad behavior, she was not to watch TV for a whole week.

During that week I decided on the day while Marion was in preschool that I would go through her toy box and closet and see what else I could do. I ended throwing out another 25% of her toys with missing parts and what not and then taking about a third of them and storing them away in our backyard shed. It occurred that really all she  really needed was her active toys and imaginative play toys. This is a girl who spent 20 minutes playing with her 9 month old sister just using a laundry basket! What was I doing leaving all of these toys around for her to play with? So,  after the big clean up, what we were left with was baby’s toys in a storage bin, 5 cars, a firetruck,  her dress up kit, a dollhouse, and some food with a shopping cart. I got rid very few books as I am strong believer in them.  When she got home from school she barely noticed.

The next day I told her to go play and she said, ”But mommy I don’t have any toys to play with.” She went to her room and focused on entertaining herself and Eliza. Then I experimented. I took a shower the next morning and said to Marion, “Here is your shopping cart and your food.” Let me know what you went shopping for and what happened at the grocery store.” To my surprise I took my shower completely uninterrupted. I came back out and found her wheeling around her cart and talking to her bunny jack and play food items in various locations of the house. She was still playing when I finished dressing and doing my hair. It all occurred to me that a 4 year needs such little to be entertained.

Our 1 week of TV turned ended up turning into 3 weeks. After just a few days of no TV, Marion didn’t even ask to watch it. She was either make-believe playing or playing outside in our backyard.

The next thing I did was keep her at home for 2 weeks from preschool to see if there was a big difference. I decided to take this time to communicate to her and remind her of what we want to see and reinforce our family values. 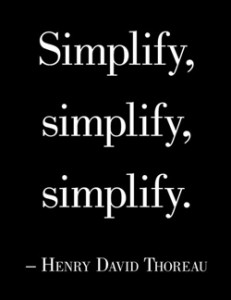 How soon did you see positive changes?

I saw many changes in a quick amount of time once the TV and toys were taken out of the equation. As a matter of fact, I saw this blossoming 4 year old girl with such a vivid rich imagination. I could over hear her in her imaginative play and found that at some points of the day she had me on the floor laughing. I could see more of her talents emerging and about a week I started to teach her more academic type material such upper and lower case letters. She was not only glued to what I was teaching her, but she learned the differences so quickly I was amazed.

By the 2nd week we were on our way for 6 hour long roadtrip with a cranky 9 month old and she was actually very excited about the vacation on both the family time and the learning aspect of it. She was remarkably better and remarkably the most patient 4 year old I ever met considering we drove to so many places, took very light naps, and spending our evenings in a hotel room all together.

The most drastic change I kept made was finally deciding to pull her out of her preschool and keeping her with me until I found a preschool with a good fit. We still have very few toys and even though we celebrated her 4th birthday party recently we still have very little toys lying around. We are leaving her with imaginative play toys and the other types stored away for another day so her room is still not so cluttered with toys.  We are letting her watch TV programs once in a while again. We are just doing it a little differently. Instead of using the TV so I can shower or cook I am using it more like a tool for our discussion and showing Marion some of my interest. Half the time I watch it with her or the other half of the time we are using it as a discussion tool.  I especially like the original version of the Little Rascals all black and white and even a few shows are silent film and to my amazement Marion is very interested in the silent film. Again another amusing fact of how little noise and colors these little preschoolers really need.  She likes her Sesame Street and Olivia too, but I realized that she is only watching these shows maybe only 3 times a week tops!

Do you have any goals in mind?

My main goal was not so much just try to get rid of the bad behavior, but to try to actually get into the deep of it and figure out what was the real trigger into her tantrums, anger, and anxiety. She just wasn’t being herself and I wanted to get her back to feeling like she was with us as a team and get in touch with her feelings.  It seems like keeping life simpler just made her clear her mind well enough to tell me.

How long has it been?

I began making these changes and about 2 months ago. Each day is a new day and better. Not much is missed either.