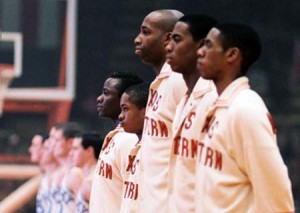 Recently, our family movie night pick was the movie Glory Road.  If you don’t know this movie, it’s the true story of the 1966 college basketball team from Texas Western.  The coach was given limited recruiting funds and told to build a team.  In an unprecedented move, he recruited seven black basketball players.  “I don’t see color,” he tells dissenters, “I see quick, I see skill … and that’s what I’m putting on the court.”  In the final game of the NCAA championship, the coach puts all seven black players on the court – and plays only them.  They beat Kentucky for the national championship in what was called “the greatest upset in NCAA history.”  He did it to change the hearts and minds of a country so bent on racism that they could not see past the ends of their own noses.

I loved this movie.  I’m a sucker for a Jerry Bruckeimer film on a bad day.  So, a basketball movie made by Jerry Bruckheimer about persevering through ignorance and prejudice is just my kind of movie.  Knowing the energy of the film and how much of a basketball fan my daughter is, I just knew she’d love it, too.  What I didn’t realize, though, was how much we’d sheltered her from the harsh realities of racism in America.

We believe, that as Christian parents, it’s our duty to teach our children to understand and defend the dignity and the worth of every human being.  It’s core to the Christian culture, even though it isn’t always practiced due to the makeup of our culture by sinful man.

It has always been our goal to raise our children not to see color, and is exactly how I was raised.  We’ve never distinguished between the races.  We don’t classify people by race.  We don’t encourage Kaylee to elaborate on the races of her friends.  It is simply something we do not care about.  A bit.

You always wonder, though, if your message is getting through to your children.  Despite the shelter of our home and the race-free intent, there is still a sinful, nasty, prejudiced and racist culture beyond our four walls.  Kaylee, especially, attends a school in small town Kentucky – where race is almost as much an issue as when the Kentucky fans waved the Confederate Battle Flag at that notorious NCAA basketball tournament in 1966.

Occasionally, though, your children throw you little bones to affirm that you’re doing a good job.  We have a family at church who have a daughter named Addy, whom they adopted from China.  Addy is clearly Chinese – dark skinned, eye shape, straight black hair.  Kaylee loves Addy, and the feelings are mutual.  My friend often picks Kaylee up for a youth event, and Addy gets so excited when Kaylee gets to ride with them.

This same family have sons in Kaylee’s youth group.  One evening at church, the youth were talking about where they’ve been in the world.  Addy’s oldest brother said, “I’ve been to China.”

Kaylee said, “When were you in China?”

He said, with a tone that implied, duh, “To get Addy.”

Kaylee said, “Why was she in China?”

Flabbergasted, he said, “Because she’s Chinese.  That’s where we adopted her.”

She was being sincere.  Race is so removed from being important in her mind that she never considered it when thinking of this little girl.  It really encouraged us in our attempts to raise her to see humans as human beings, made in God’s image, rather than any other way.

So, to get back to this movie.  It dramatically and emotionally highlighted the racism that this team faced traveling the country and working its way up the NCAA ranks.  By the end of the movie, Kaylee was MAD.  She intellectually kind of knew about the general racist atmosphere of this country that sparked the era of the 1960’s.  She could spout off encyclopedia facts about Dr. Martin Luther King, Jr.  She might be able to give you the names of some prominent black historical figures due to learning about Black History Month in her 9 years of school.  But she’s never experienced and emotional tie to it like this movie did to her (and it probably helps that she finished reading To Kill a Mockingbird the same weekend we watched this movie). It drew her into the time, into the hate, and she came out of it with such righteous indignation that if there were still racial equality marches happening, she’d be out there leading the throng.

You can’t battle that kind of ignorance, that depth of hate.  Not really.  People can mask it, but it comes from a pit of evil, from the lies and seduction of Satan himself that without the power of God, there is no overcoming it.

Kaylee said, “What can we do?”

Our answer was unpracticed, not thought about, unprepared.  All we could come up with was, “Teach your children as we’ve taught you.  See people as God’s creation, and not with color.  Love your friends as Jesus commanded us.  And don’t tolerate hate in your presence.  Make people accountable for what they say.”

Our prayer is that such ignoramus thinking will one day be a thing of the past.  That color won’t matter – that the heart of man is what we see rather than the pigmentation of skin or the slanting of eyes.  That loving our neighbor means loving our neighbor and not just the neighbor who shares a cultural tie to us.