When Scott was an infant, I had to go to the bank.  Whatever I was doing, I needed to go inside to do it.  It must have been going to be a quick trip, because instead of using my Ergo or ring sling, I had him in his car seat.

I went in to the bank, set him on the ground next to me, and used the table at the bank to fill out whatever form I needed to fill out.

Suddenly, I heard the teller crying, heard doors shutting and locking, and people running around all around me.

Apparently, the bank had just been robbed.

For obvious reasons, I wasn’t able to leave.  So, I got Scott out of his carrier and sat with him in the lobby of the bank.  Thankfully, there was a seating area with a couch and a few easy chairs.  The staff of the bank were very nice and incredibly apologetic.  I kept assuring them that they didn’t need to worry about me.

Before long, the police came, and not long after, a team of detectives.  The writer in me was eating up being able to see first hand the process of a bank in post-robbery mode.

When the detective came to interview me, I had my first feelings of discomfort.  It occurred to me, as I began to answer questions, that I knew NOTHING.

Not only had I not seen the man who robbed the bank, I had not even been aware that a man was in the teller line.  I had come into the bank thinking about the business I had to conduct, and never even looked around me.

This man had apparently come into the bank behind me, robbed it, and left, and I hadn’t even known he was there.

Here is a clip from the security camera of the bank. 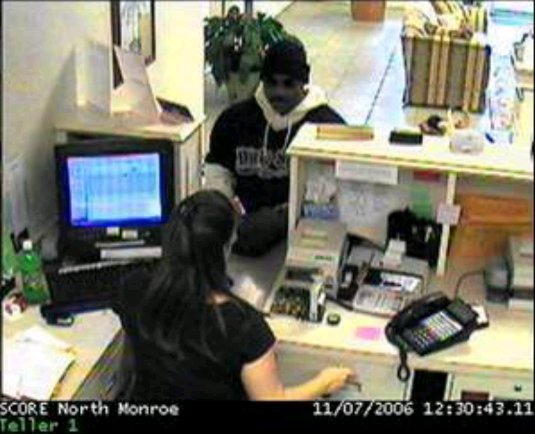 Scott was so close to this man that when he left, he walked right by him. 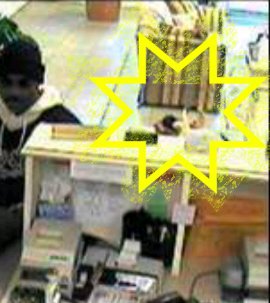 I was so embarrassed.  But, apparently, wasn’t an unusual “witness”.  The detective informed me that most people are unaware of their surroundings the way I had been.

After that, I became determined to be aware.  Not only in case I ever ended up being a “witness” again, but just for my own safety.  Now, when I walk into a building, I look around.  I see who is in the room with me, where they are, where the exits are, and kind of file it away in my brain.  If I hear a door open, I look.  If someone walks by me, I look.

It took a lot of training of my brain to automatically do it.  I don’t think that I could still do well on those games where you look at a scene, someone removes some objects, and you write down the list of objects that were removed.  However, I at least could tell a police officer if someone was wearing a black and gray hoodie and a black ski cap when they robbed the bank five feet away from me.

Be aware.  Don’t become paranoid and afraid, but at least be aware of your surroundings and the people around you.