Pastor Tim Challies is a self described “follower of Jesus Christ,” author of The Next Story among other titles, and blogger. He worships and serves as a full time pastor at Grace Fellowship Church in Toronto, Ontario, Canada.

After Rachel Held Evans wrote her “Thou Shalt Not Let Thyself Go” post which alleged that Christian men are fundamentally shallow mysogonists, Pastor Challies responded … taking on the sometimes daunting task in our currently ultra-feminized and ultra-secularized culture of writing an article that specifically deals with how important appearance is in marriage while disagreeing on the whole with Evan’s sexist worldview.

Not surprisingly, like myself, Pastor Challies also disagreed with the conclusion Evans’ reached based on her stated assumptions. In his article, he made the gentle case that within the context of marriage, the appearance of one spouse is important in the eyes of the other spouse.

While Pastor Challies starts his article by pointing out the red herring Evans cooked up — that if wives slouch off on their appearance, husbands will cheat on them — that isn’t what he chooses to focus on in the main thrust. Challies makes the case that while YES appearance counts in marriage, he dispels the notion that becoming a slob absolves your spouse of any sin. Further, he draws the distinction between naturally growing old and living life with what he calls “inward and outward appearance” which I defined as either our Image Bearing spiritual appearance or our objective/subjective appearance.

Evans’ post focused on women. Therefore, many of the points and counterpoints in Challies’ article also focus on women. Still, I find that Challies makes his argument in a very even handed way. Some excerpts from the article which tend to support this:

“This is not about a woman whose body bears the battle scars that come with 3 or 4 pregnancies or about a woman who has lost a breast to cancer. This is about a woman who expresses her love and respect for her husband in her dress and in her appearance. This is not about choosing plastic surgery over surrendering to gravity’s influence on breasts, but choosing outer expressions of an inner reality. It is about brushing the hair, about choosing an attractive sweater instead of the stained Mickey Mouse t-shirt. It is about those things that display beauty, availability, respect.”

“It should be noted that in this way a man can let himself go just as much and it would be just as much of a sin. I know of women who have become utterly disgusted by their husbands — husbands who have given up, who do not show their wives the dignity of seeking to remain attractive to them. It is not just women whose clothes and whose appearance make a statement. It is not just women who ought to make a continued effort to be attractive and appealing and dignified.”

Challies makes a clear distinction between the objective appearance of a woman who bears the “battle scars that come with 3 or 4 pregnancies or … lost a breast to cancer” and the type of subjective appearance he is writing about, what he calls outward appearance.

So, in summary here is Challies’ conclusion: When married, appearance matters.

Is his point valid? Does outward appearance, in fact, matter in marriage?  Let me put it this way.  There are three more posts in this series.  I’m getting there.

In the Shadow of Adrienne Gershäuser 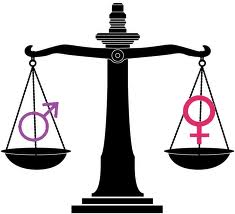 After gently making his case, the first commenter on Challies’ post had this to say (paraphrased for brevity):

“Why do men, especially pastors, seem to want to spend so much time giving advice to women about how to dress? …Most of the time I see pastors responding to issues of dress are pastors that are complementarian in outlook. For those that are, wouldn’t it be more appropriate for the issue to be addresse [sic.] by women (and probably better received.) I have seen some of those articles. But what I see more are the articles by men. And if the articles by women are enough, why do men keep writing more. [sic.]”

A Circumstantial Ad Hominem fallacy is one in which some irrelevant personal circumstance concerning the opponent is offered as evidence against the opponent’s position. The fallacy claims that the only reason why he argues as he does is because of personal circumstances, such as standing to gain from the argument’s acceptance. This fallacy is often introduced by phrases such as: “Of course, that’s what you’d expect him to say.”

I should not have been surprised by this fallacious militant feminist jingoism appearing after the pastor’s mostly even handed post, but I was. I noted with growing disgust that neither the topic at hand nor the conclusion that appearance matters to married people is ever addressed by this person throughout the remainder of her many comments. She merely piles on the sexist “consider the (male pastor) source” outrage and personal indignation in order to ignore the point and attempt to misdirect others to do so. Instead of taking on the conclusion of the article, she merely says, “Of course, that’s what you would expect a male /man/pastor to say!”

Think about how arbitrary and irrelevant that is for a moment. Whether or not one would expect a man or a pastor to come to this very reasonable and rational conclusion and then put it into words could not be much more irrelevant to evaluating the truth, validity, cogency, or reality of the conclusion itself. To refuse to take on the conclusion is simple emotionally charged cowardice, not rationality, and not biblical.

Second, our less than rational commentor eats and has her cake. She apparently feels very strongly that men have nothing to offer by way of insight in matters that affect women. By her own logic, then, why is she — a female — responding to an article penned by a male? According to her logic, shouldn’t she just keep her (female) opinions to herself about what this male has said and just let other men speak to him concerning his opinions? By her own logic, would not that communication be “more appropriate (and probably better received)”?

OR — is it that she understands that women have every right of criticism in the universe to offer concerning the behaviors of brutish, stupid, foolish, irrelevant males? BUT — that men had better keep their ignorant little mouths shut concerning anything about the fairer sex? If that is the case then we have this somewhat blatant double standard that utterly defies both logic and rationality. Or is that just simply bare-faced sexism and bigoted? This is what happens when Christians attempt to conform to the world instead of the WORD.

In her comment, she makes it clear that she sympathizes with the Egalitarian worldview by castigating the Complentarian worldview. One reason I don’t find the Egalitarian perspective entirely cogent is because the militant feminist perspective and the Egalitarian Christian perspective both deny the Bible’s teaching on the roles of men and women and instead share this fictional belief that men and women are entirely identical in every possible way “at their core.” As if “at our very core,” we are these androgynous, sexless “persons” with no gender identity that should really be of any consequence in dealing with our fellow human beings.

If this assumption were true, then isn’t it fair to say that any androgynous “person” be that person male or female should have a completely equal right to make and state observations and opinions about the views of any other sexless and genderless “person” in an utterly egalitarian and entirely equal fashion, without fear of sexist sneers or rebukes?

To quote an Affirmation from the oft quoted Danvers Statement, “Distinctions in masculine and feminine roles are ordained by God as part of the created order, and should find an echo in every human heart.”  Biblically speaking, men and women were both created in the image of God. We were created by Him to achieve different goals by different means.  Scripture informs us that we are handled in different ways by our Creator based solely on our sex.  Therefore we are not utterly identical and without gender at the mythical “core” of our beings.  However, being that we were each created in His image, men and women are not only entitled to prayerfully minister to those things concerning the heart, but have a responsibility to do so since we are all children of the same heavenly Father.

I pray that the commenter I quoted above reads this post and summons the rational ability required to avoid fallacy and her obvious sexism and actually address what her issue is with the conclusion of the article.

Is she of a mind-set that appearance isn’t important in a marriage? What is her evidence that this is the case?

While it may be her WISH that this were reality, it is not reality. It is not true. I admire Pastor Challies for his courage in speaking the truth.