My dad quit college and joined the Army in 1969.  Consider America’s political climate at the time and contemplate purposefully walking into a recruiter’s office and joining the military.  He did this for two reasons.  One,  he didn’t want the distinction as being drafted.  In 1969, if you were drafted, your service number had a distinction between being drafted and being “regular Army”.  And, that meant that anyone in your command would know that you were there by force rather than by choice.  And two, he thought he might want to be a career soldier and he never wanted anyone to assume that he didn’t want to be in the military so he went ahead and joined – despite the Vietnam War, despite the political climate.  He also went ahead and joined the infantry.  In his words, ” My thought was that if I was going to be a soldier, I might as well be a soldier.  Many of the draftees, when given the option to enlist for an additional two years and choose an MOS, did so just to avoid infantry… In that war the mortality rate among enlisted infantry was many, many times higher than for everyone else.”

That has always impressed me. 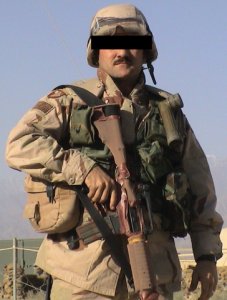 Gregg’s Army Reserve unit was deployed for the first Gulf War when he was in in his third year of college.  He spent 23 months in the desert and when he returned home, he got out of the military to finish college and to pursue his career.  Then 9-11 happened.  September 2001, Gregg purposefully walked into a recruiter’s office and reenlisted, specifically requesting a Special Forces Unit that would definitely be deploying.  He felt very strongly that the military needed combat experienced NCO’s.  Before a year was over, he was back in combat.

That also really impressed me, especially because at the time, he was still living with the effects of his first nearly two year experience of living in a combat zone.  So, while there was a wave of patriotic raw recruits who flooded the recruiters’ offices following the wake of the terrorist attacks, Gregg knew exactly what he was about to face, raw and real, without all of the glory and edited jingoistic saber rattling suggested by the common propaganda.

Ten years later, Gregg has spent more than 3 years in Afghanistan.  He has weathered not only the lonesomeness of sleeping in a sweaty bag 8,000 miles away from the comforts of hearth and home, but a shifting political climate that went from a stunned nation to a questionable engagement in Iraq to a national defense force that has become a political pawn to the frothing cesspool of talking heads.  He has lost friends and attended funerals.  And today, he lives in a nation that has largely forgotten that a decade after the September 11 attacks, we are still at war.  We still have brave men and women who are defending liberty on the frontiers of freedom day in and day out with their very lives.

When I was in high school, my dad was stationed at Ft. Benning, Georgia – home of the U.S. Army’s Infantry.  A friend from high school lives there still.  He recently posted on his Facebook page the following story:

Coming home yesterday, stopped at the light right there on Victory Dr. and Benning Dr. I look over at the car next to me. I see two g.i.’s, can’t be more than 20 a piece…All of a sudden from their radio “I whip my hair back and forth” comes on and they start jammin and car dancing. I start laughing…and give them two thumbs up. The license plate is from Illinois, I see as they pull off.   I laugh about it for a while, the image is ridiculous and hilarious still in my mind. Then it hits me… these two KIDS, half my age, who just want to be young men having a good time, have a better chance of losing their lives in the next few years than I do.  I am humbled and honored by their service! And it makes what I witnessed not so ridiculous nor funny but more of a big moment of reflection. God Bless them and all the young men and women who fight and die for us on a daily basis. Rock on, be young, and live life to its fullest everyday. And if you want to whip your hair back and forth, then do it!!!!!

Think about this for a moment:  Every single person in today’s military is a volunteer.  And every single person there has either joined or extended their contract during war time.  We are observing the ten year anniversary of the terrorist attacks of 9-11, and we have been at war for almost ten years.

2.3 million men and women have served in Afghanistan or Iraq in the last ten years.  At the time I write this, according to the Iraq and Aghanistan Veterans of America, the Official Department of Defense count of troops killed and wounded in this war was:

So, I just want to take a moment and say, “Thank you.”  Thank you for volunteering in these times.  Thank you for being a patriot, for serving, for fighting, for risking your life for my future and for my children’s future.

I pray that this war will finally end soon.