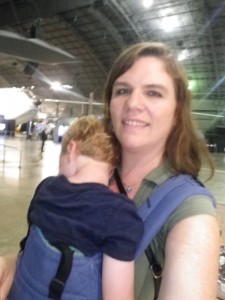 We had the opportunity to go to the United States Air Force Museum at Wright-Patterson Air Force Base, Ohio, last week.  This was an amazing museum – detailed displays from the first Wright Brothers plane to the space shuttle, and the history of the Air Force all in between.  It filled three massive hangars.

We didn’t take our stroller with us, because the trip was impromptu.  Thankfully, though, I had my Ergo in the back of the van.  Scott walked or was carried by Gregg on his shoulders, and Johnathan alternated between walking and being worn by me in the Ergo.  About an hour after we got there, we watched an IMAX movie and the boys both fell asleep.  Scott woke up as soon as the movie was over, but I just turned the Ergo around to my front and carried Jeb in it while he slept.

There are volunteers covering the floors of these hangars, and as we walked from the IMAX theater and through the displays and exhibits, I was stopped by about ten different volunteers who asked me if I wanted a stroller.  When I thanked them and said I didn’t need a stroller, they insisted that the strollers were free and that I could use one.  Again, each time, I thanked them and walked on.

I wasn’t carrying Johnathan in my arms.  My arms were free.  He was in a carrier, and was completely comfortable.  I wasn’t struggling under his weight or burdened by it – his weight is very familiar to me.

It was very strange.  When I saw the bank of strollers, even if I had been carrying him in my arms, I wouldn’t have been able to put him in them.  They were metal framed and sitting upright – like a shopping cart baby seat.  Not really a place to lay a sleeping child.  Had I been alone, without Gregg, I would have definitely used one to push Scott and still worn Jeb in the Ergo, and I would have been thankful for the provision of it.

It didn’t bother me that they offered me strollers.  I realize they were trying to help, but when I say at least ten people asked me, I’m not exaggerating.  And, I don’t understand how they thought I needed the help.  Surely women wearing babies walk through that museum all the time.  Or at least, I assume they do.  Maybe not.  Maybe it was an unusual sight.