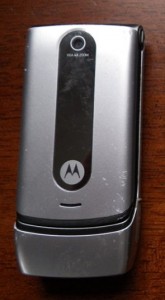 No kidding, this is a true story.  Not even the names have been changed to protect the innocent.

Household6Diva asked her readers recently, “What kind of cell phone do you have and why?”

An aside:  I hate phones.  I hate talking on them.  I avoid using them as much as possible.  I almost never call someone if I can email them.

My answer:  I have a prepaid plain cell phone with no bells or whistles. ‘Cause I just want a phone and I don’t necessarily want to have to talk on it.

But, in all fairness I also have an iTouch.  Gregg got it for me to travel internationally, so that I’d have  music, videos, sermons, and internet access wherever I found myself.  Kaylee installed an ap for me that is a texting ap – free texting worldwide!  I can even text Gregg’s cell phone.  I love this ap because I can text with a full keyboard instead of the number pad on my plain boring phone.  I just can’t talk with it because it’s not a cell phone.

For four days in a row, I got a phone call from this number.  Then I got a text (same number).  The incoming texts are in green.  My replies are in blue.  I have changed nothing -no spelling, no grammar, no punctuation.  This is over the course of two days.

Hey gus thiz iz hannah do u have camerons #?

Of course I’m sure.

Im hust wobderin thiz but do u go 2 toliver??

That text doesn’t even make any sense.  I’m a grownup.  Learn to communicate in complete sentences with proper punctuation or you will have a very hard life in front of you.

Srry guess i got rong # 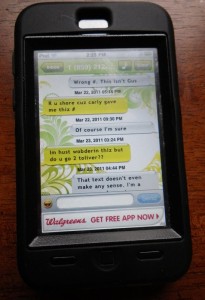 I talked previously about the lack of phone skills in the youth of today.  I guess there’s a big hole that’s been overlooked in texting etiquette – if such a thing exists.

Aside from the fact that I could have been ANYONE on the other end of that communication string, is this really how we want our children communicating — even with each other?  The habits they’re developing now are going to stick with them.  At some point, they need to learn how to talk on the phone and how to communicate electronically.  Now that most of them have full keyboards with which to type out texts, there isn’t even a reason for the lingo or the acronyms to be used anymore.

Beyond just the poor communication skills that are developing, I guess one of the major problems is that parents have been so removed from inter-personal communications between tweens and teens.  Once they had their own phones and own methods of communication apart and removed from adults, it all just went downhill.  I’m not criticizing those of you with children with their own phones – my daughter has a phone, an iTouch, and a laptop.  I’m just kind of giving us parents out there a little head’s up – a little nudge.  They’re talking to people they don’t know, blindly texting, and making friends on Facebook – and oftentimes we don’t even know what’s going on.

I try to stay on top of Kaylee.  I check her phone, iTouch, and Facebook regularly.  But even as diligent as I tend to be,  I’ve had to block and report obvious predators, shown her how I knew and worked on teaching her how to figure it out for herself; I’ve blocked and removed kids whose pictures, music, and quotes were just, well, BAD, and have been open and honest with her why and when I’ve done it; and I’ve pointed out her communication shortfalls with texts and have encouraged her to expand words, use punctuation, and use proper spelling.  It’s just a major area of her life that cannot be left to just her.

We need to close this gap somehow – reel the kids in a little bit.  I fear we’ve made a drastic mistake as a society by allowing children, tweens, and teens such freedom of communication.