Scott loves fish.  At Whole Foods, we purchase the fresh trout – it is cleaned and deboned, but the heads are still on it.  Scott calls them “Dead Fish” – and loves it when we’re having “Dead Fish” for dinner.  Gregg’s family has a beauty school in another town – and right next door is a Long John Silvers.  We don’t have that restaurant in our town, so it’s a treat when we go get haircuts to go to “Fish Wunch”.  Scott has been known to come up to me and play with my hair and say, “You need a haircut because I want fish wunch.” 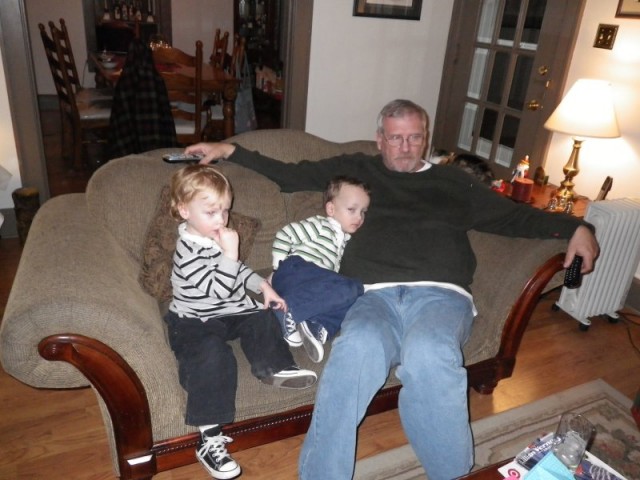 At my parents’ house this weekend, Scott and Johnathan were watching a nature program with my dad.  My mom, in another room, said to my dad, “I don’t want them seeing anything that is too disturbing.”

I could see the television over the back of the couch from where I sat in the dining room and knew it was a nature program, but didn’t really pay attention to what they were watching.  I said, “They aren’t seeing anything we didn’t watch with dad as kids.”

My mom paused and said, “You’re right.”  Then she and I laughed about it.

I finished whatever it was that I was doing and zoned in to the television.  Come to find out, they were watching a show about crocodiles.  Just as I started watching it, they showed the crocs attack a school of fish, and one crocodile very violently eat a big fish.   Scott popped up from where he was sitting to look at me behind the couch and said, “Just like me with fish wunch!”

Jeb popped up right beside him – like a puppet show.  “Fish wunch!  Fish wunch!”

They went back to watching the program, jibber jabbering about eating fish and “fish puppies” (aka hushpuppies) just like the crocodiles were.  After the program was over, Scott said, “I’m hungry for fish wunch.”

I guess they weren’t watching anything too disturbing.  heh.