I Am Not a People Person

I just flew from Pittsburgh, Pennsylvania, to Dubai, United Arab Emirates, with a stop in Paris, France, then returned home on a flight from Dubai, United Arab Emirates, and finally back to Pittsburgh, Pennsylvania, with a stop in Amsterdam, Netherlands and another stop in Detroit, Michigan.  Twenty-eight total hours flying, about fifteen hours sitting in airports, and crossing the paths of hundreds of people.  It occurred to me after this trip, as I was driving home finally, that I am not a people person.

On the day of my first flight out, my dad was returning from a trip west.  His flight landed about two hours before my flight took off, so we were able to meet in the airport and share a meal.  He had met a man on his flight who joined us for the meal.  It was neat to talk to him, to hear about his work and his life.  The reason that they were able to create this moment of fellowship is because they sat next to each other on the plan and engaged each other, talked to each other, shared life stories and life events, and cultivated enough of the beginnings of a friendship to make plans to have dinner together outside of the airport.

My parents are both like my husband.  They can talk to anyone, at length, regarding just about anything.  And they enjoy doing it. 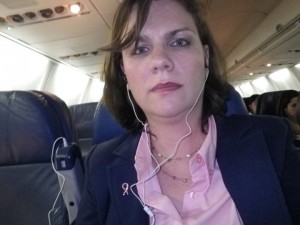 Despite the questions and the curiosity, I didn’t follow up with any more questions.  She did not ask me any questions.

Flying from Paris to Dubai, I sat next to a mother of an 18-month-old.  She was coming from the Philippines, her home, to meet her husband, who worked in Dubai.  Again, I didn’t ask any of the questions in my mind:  What does your husband do?  How did you meet?  Where was your son born?  Where did you live before Dubai?  How is it different living in Dubai versus the Philippines?

I sat next to another young woman on the flight from Dubai to Amsterdam.  She was in full Muslim dress in a jilbāb and khimar.  We did not speak the entire five-hour flight until the plane landed in Amsterdam.  As we taxied to the gate, I discovered that she had been in Africa but was going home to Holland.  Holland?  That sparked a million-and-a-half questions, which I did not ask.  Why were you in Africa?  Where do you live in Holland?  Where is your family originally from?  Are you married?  Is the Muslim population large in Holland?

From Detroit to Pittsburgh, I sat next to a man who had been on the flight from  Amsterdam with me.  He worked in Saudi Arabia in the same town my husband spent a good portion of his childhood.  What do you do?  For whom do you work?  Do you speak Arabic?  Does your family live with you there?  Where are you going from here?  You’re reading John Grisham.  Do you enjoy his Christian novels, too?  Do you know the Good News, that Jesus Christ is the risen Messiah, the Son of God, the eternal one, the Alpha and Omega, the beginning and the end, and that all of life—history past, present, and future—is in His sovereign power?

But, I don’t ask those kinds of questions.  It’s not that I don’t care or that I’m not interested.  You’ll be hard pressed to find someone more interested than me.

What it boils down to is fear.  Phobia.  What if this person doesn’t care to talk to me?  What if I’m bothering them?  Why should they care about what I have to say, how I say it, or anything about me?

I know what you’re thinking.  You read some of my deepest thoughts on a regular basis.  But, you come to me.  You’re not trapped next to me for six or eight hours on an airplane being forced by politeness to respond to conversation you’d rather not have.

So rather than risk bothering someone, or annoying them, or facing blatant rejection, I simply say nothing.  I stay quiet.  I go into my own world of sermons on my iTouch or my Bible or the latest book I’m reading or whatever blockbuster Delta has to offer through the individual media centers.

And I seriously miss out.  I miss learning about someone.  I miss the chance to make a friend and have dinner together another time.  I miss adding someone to my Facebook friends list.

But worst of all, I miss the opportunity to minister to someone.  To share Christ with them.  To pray for them or even with them.  Or to fellowship with another believer.  And that is the worst part of it.  Because we never know when God has placed someone in our paths for a specific reason.  And I let fear of whatever it is keep me fulfilling the plan God may have for me, or for us, or for them.

I recognize it as a weakness in my character.  Now I guess that since I’ve recognized it, I need to go about fixing it.