For an explanation of the Daniel Fast, a 21-day fast, see this post.  But, to run down, it’s just fruits, vegetables, and seeds with only water to drink.

I ran the kitchen for 3 days last week.  One day, hardly any help showed up.  It was just me and one other girl for a while, then one more girl came.  After we open, someone comes and delivers bread and desserts that a local store donates, and then the driver comes to pick up the meals on wheels food that we’ve prepared that morning.  Once that’s done, I am supposed to lock the doors and unlock them when it’s time to serve lunch.  The day that the staff was really small, I forgot to lock the doors.

I was outside of the kitchen in the dining room sorting the bread and the desserts.  The items we can’t use go on a table and we give them out free to the people who come.  A lot of people come early to get the good stuff every day.  Any boxes of doughnuts and such, we put on the tables, open, for people to just enjoy.

I was alone in the dining room.  This is a long room – the length of the church building – and I was at the end, near the kitchen, well away from the only entrance to the room.  As I was sorting bread, I turned around and a man was standing right next to me, his arms outstretched as if he was coming in for a hug.  He was tall, unkempt, unshaven, sweaty, filthy, and he smelled really bad.  I’d never seen him before.  But I hugged him anyway.  It felt wrong not to.  He slapped me on the back and said, “I’ve just been telling people about Jesus!”

I smiled and said, “Amen, brother.  Isn’t that what we’re supposed to do?”  I gestured to the table.  “Do you want a doughnut?”

“Boy, do I!”  He quickly sat down and opened a box of 3 cinnamon rolls. 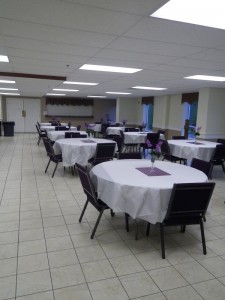 round a mouthful of pastry, he said, “Oh yes.  Coffee.”

I went into the kitchen, poured him a cup of coffee, and took it to him.  He said, “Man, they don’t treat us like this in Indiana.”

I turned around to do the bread, then just a second or two later turned back around intending to ask him where in Indiana he was coming from.

The box of pastries was gone.  The cup of coffee was gone.  The chair was pushed in.  There were no crumbs anywhere.  It was probably 20 yards to the doorway (I was way up by the column by the kitchen window, and he would have had to come past where I stood to take this picture) and there was no trace of him.

I asked the girl who was working with me if she saw the guy leave, and she said, “What guy?”

I don’t know who that man was.  He was probably a homeless guy from Indiana.  But, Hebrews 13:2 immediately came to my mind and stayed with me all day:

Do not forget to entertain strangers, for by so doing some have unwittingly entertained angels.

11.  I’m looking forward to ending the fast, but I’m also REALLY glad that I’ve had this experience.