Wow, What a Week!

Like I said last week, I had a busy few days in front of me and both of my boys were sick.  They had Hand-Foot-Mouth disease, and Jeb was in so much pain that he wasn’t able to sleep.  We didn’t sleep for three nights.  I was absolutely exhausted.

Somehow, through that, I was able to design and implement a wedding cake that I donated to a friend of a friend’s best friend’s wedding.  They couldn’t afford a “real” wedding cake, and this friend told her friend that I might be willing to donate one.  Of course, I was happy to.  I just didn’t know it would come at such a crazy time.

After talking with the bride on the phone and finding out that her wedding cake topper was a John Deere tractor, I decided to go with daisies as the flower on the cake.  Only — I’d never made daisies before.  By the time I learned how to do them (because, why would I look it up instead of try-fail, try-fail over and over again?  geesh) I’d wasted two days and two batches of royal icing.  BUT, I learned how to do them (and how not to do them a dozen different ways).  I was up until two o-clock in the morning the Thursday night before the Friday when I had to have the cake finished. 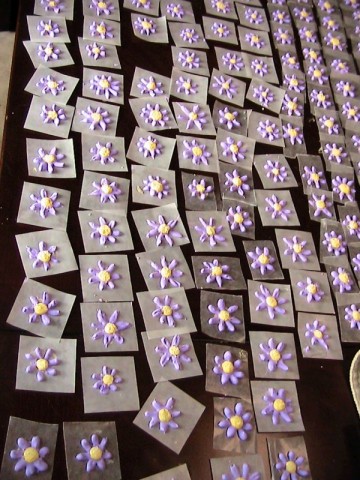 I found a left-handed drop flower tip, which is awesome, because Kaylee, Jeb, and I are left handed.  So, I taught Kaylee how to make drop flowers while I was in the middle of a break from failing daisies. 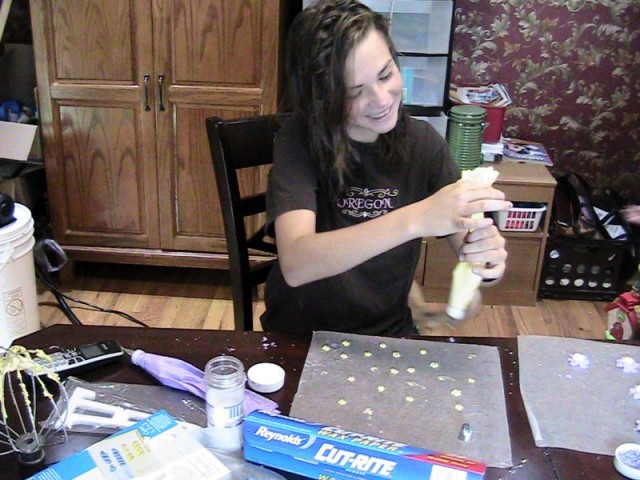 We made over 300 drop flowers for the cake. 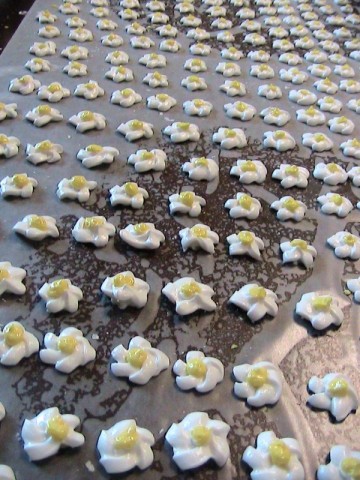 While the wedding cake topper was a green tractor, the colors of the wedding were all different shades of purple.  It was a challenge to tie all of the colors together in the design.  I’m hoping I get to see a picture of the final product.  As it is, here is a picture without the topper: 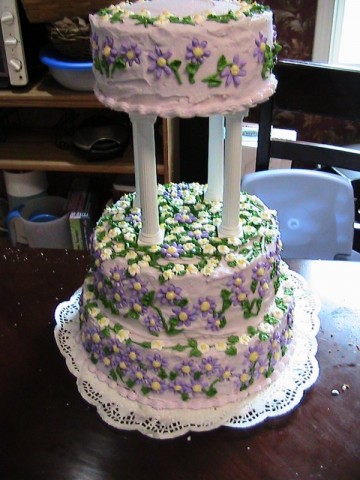 I finished the cake at 5PM on Friday.  The day that my sister-in-law was due in with her four kids and one more niece.  My house had been under Kaylee/boys control for three days while I worked on baking cake, filling cake, volunteering at the soup kitchen, etc.  I was scraping royal icing off of my kitchen cupboards with a Pampered Chef stoneware scraper.  But, at 6PM, she called and said she was spending the night on the road and would be a day late.

They got in town about noon on Saturday.  We got lunch fed to kids, then she and I left all of the little kids with  all of the big kids and ran to Sam’s Club to shop for our family reunion that was happening on Sunday.  When we got back, we loaded kids into cars and drove the 90+ minutes to the family youth camp called Glen Eden.  We were up until about 11PM cooking, then spent the night in the lodge there and were up again about 6AM to finish cooking.  The reunion was at noon.

We came back home that night.  As tired as I was, I couldn’t go to sleep as early as I wanted because I had a feeling that I would get a rare late-night phone call from my husband.  He called me at midnight, which was 8:30 in the morning for him, to wish me a Happy Anniversary.  We were married eight years on Monday.  I stayed up until quite late talking with him.

For the next couple of days, in between doctor appointments, dentist appointments, and volunteerism, we played tourists and such.  Now she’s gone back home, taking four children with her, leaving one with me for the next few weeks.  I am sad to see her go.

Gregg adores his sister.  He respects her on a professional level, on a personal level, on a spiritual level — he considers her opinion often, and defers to her when the situation warrants it.  In fact, it was SO intimidating for me to meet her.  I was so afraid that she wouldn’t like me and would tell him so – that her opinion would affect his opinion.  She is a Lieutenant Colonel in the Army and has had an amazing and busy career.

Today, she stopped me in the kitchen and gave me a hug.  She told me that she was so proud of what I had accomplished with my kids and my house, and how much she admires me.  Then she said something that reduced me to tears.  She said, “No one knows how hard it is.  No one knows, who hasn’t lived it, what it’s like.  And you are doing so well in the face of it all.”

Those of you who know me know that I don’t get emotional often.  But this hit me so hard and I just started crying.  I had to turn away and busy myself just to get a handle on it.

I miss my husband with a physical ache.  He’s been gone for over fifteen months.  We are joined together a one, but we are 8000 miles apart and I’m just tired.  I’m T-I-R-E-D.  I’m tired of holidays without him, I’m tired of watching his children grow without him.  I’m tired of going to bed without him and waking up missing him.  I miss him more and more every day.  It’s not just that he’s not here.  It’s that he’s there.  The body of a local soldier is being buried today in my little town because someone out there hates us enough that they planted an IUD on the road where this soldier happened to travel.  So beyond yet another anniversary spent without my husband, I had to think about him traveling all day Monday and how unsafe it is, then worry every time my phone rang.

It’s so hard.  And no one knows how hard it is who hasn’t been here.  It’s a constant drain on my energy and my morale, and my psyche.  It takes me boosting myself every morning just to keep a smile on my face and get through another day – because another day down means another day done and another day closer to him coming home

So to have someone hug me, who knows first hand what it’s like to be separated from the one with whom God joined together and to tell me she is proud of what I’m doing and that she knows what I’m going through just seemed to cause a little bit of this control I have bound up so tight to unravel just a little bit.

Then I realize it’s just been an exhausting week or three, and if I feel emotional about something, that’s okay.  It doesn’t mean that my faith is faltering or that I’m weakening.  It’s just that it’s been SUCH a week.  It started with me panicking Monday evening about how I was going to accomplish the week, and ended with me fighting back tears in my kitchen.  I guess everything always ends up coming around full circle.

The kids and I are spending today at the community pool, though.  I’m exhausted and I need a day just to soak up some sunshine and relax.  It will all be here when we get home tonight, and there isn’t a single thing that needs to be done that can’t wait for another day.