Yes, These Waffles Are THAT Good

When I participated in the Real Food Faceoff at Kitchenstewardship.com, one of the questions was:

It’s hard to say. I make everything I can homemade and we enjoy just about everything I make. I will say that Sue Gregg’s oatmeal blender waffles are by far the best waffles I’ve ever made – and I used to make pretty good waffles. Even if, tomorrow, we started eating white bread drenched in pork fat topped with high fructose corn syrup whipped topping, I’d still make these waffles.

The other day, Gregg instant messaged me from his work and I told him I was making him some Cinnamon Chip Oatmeal Raisin Cookies, and asked him if there was anything else he wanted me to send him.  He asked for waffles.

I’m telling you that these waffles are THAT good.

So, I made up two batches of waffles. 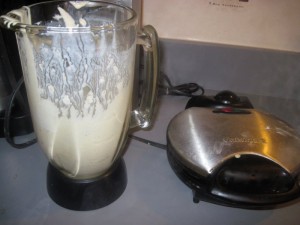 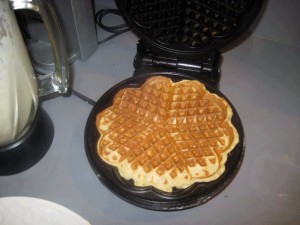 I cooled them on cooling racks so that all of the moisture dried up. 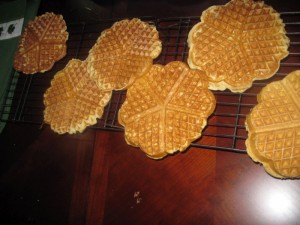 Froze them so that they would not crumble under the sealing (THANK YOU Household6Diva for that brilliant suggestion you gave me months ago that you may not even remember giving me!), then I sealed each waffle with my seal-a-meal. 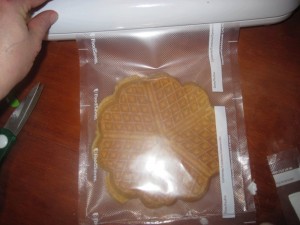 Packed them in the box. 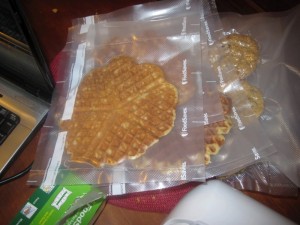 And sent him some real maple syrup. 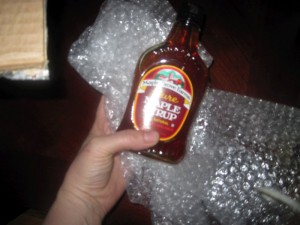 Then shipped it off to Kabul, Afghanistan.

We’re hoping he doesn’t end up receiving 12 packets of moldy waffle messes.  Hopefully, they’ll be fresh, toast-able, and as delicious as if I were making them fresh for him that morning.

If you haven’t tried this recipe, if you have a blender and a waffle iron, let me encourage you to try it.  I promise that you won’t be disappointed.