This is part three in a series about surviving separation from your spouse. Read all posts in this series.

We live in an instant world.  We have telephones, text messaging, email, instant messages, facsimile machines — everything is designed for immediate communication, for thoughts and ideas and feelings to be transmitted in milliseconds.

I have a friend whose husband is in Afghanistan.  Her Facebook status the other day was:

14 minutes later, I am still waiting for an instant message to go through on Skype… sigh!There are times when I feel an old fashioned telegraph would have been faster. 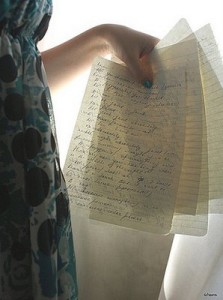 We have communication so easy these days.

Despite the convenience of this glowing screen in front of me to communicate in an instant, or within a minute or fourteen minutes with my husband, there is still absolutely nothing like receiving a letter in the mail.

I woke up this morning to three quick little jotty emails from my husband and one awesome message he left me on an internal message thingie on the dashboard of this blog.  Seeing the (3) beside his name in my email platform where I can filter and sort my email made me smile and a warm glow start in my heart.  Seeing the application on the blog that he developed that allowed him to leave me a sticky note was a delightful surprise and I read it four times just to read his words.

But when I go outside to to my actual mail mailbox and see a letter waiting on me, I get giddy.  I rip it open and have most of it read before I even get back to my front door.

I’m touching paper he’s touched, reading words he formed with his own hand and it’s like nothing else.

My husband is an amazing communicator.  Anyone reading this blog who has read his words knows that he has a clear gift in being able to clearly and concisely convey exactly what he’s thinking and how he’s feeling and what he thinks 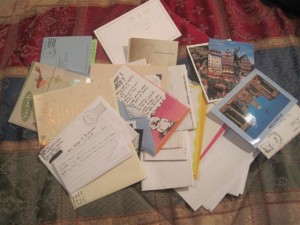 about it.  But, while typing is easy, it is very hard for him to take a pen to paper and form words.  Lots of fine skills are difficult for him with his largish fingers.  The physical act of writing is not easy for him, and knowing that makes every single word he’s put to paper that much more special to me.

I have emails by the hundreds, possibly thousands, filled with the most amazing words of love and affection known to man.  I have poetry, stories, pictures, texts…and yet the most valued treasure I have is my little box of letters.

Another friend of mine also has a husband in Afghanistan.  Her Facebook status the other day was:

I’m so very much in love with my husband.. I still wonder how I got so lucky?! got some snail mail today from him and he knows just what to say to make a girl feel loved ♥ he truly is the love of my life!!

I don’t know if letters from me mean the same to him, I’ve never asked him.  But I can hear the smile in his voice when he tells me he’s received one.  I make sure to sit down once a week and write a letter, or fill in a card.  It’s not always easy to think about what to say because we communicate so much electronically that the day-to-day stuff is covered. Once I start just pouring out my love for him, though, and abiding in him in this timeless medium, the words come.  And I’ll kiss the paper, leaving a lipstick mark and I’ll know that his hands will touch my kiss, and we’ll share that moment of a special bond that an email just simply cannot provide.