This is part two in a series about surviving separation from your spouse. Read all posts in this series.

I love my husband’s voice. He has a rich baritone voice that just makes my heart go pitter-patter in my chest. I love getting emails from him, but I LOVE hearing his voice.

He is the one in control of being able to call (not that he has a lot of control over that.) When he’s able to call and if he can get a line out, he can call and we can talk for ten minutes at a time.

I cannot call him, but I can leave him messages. 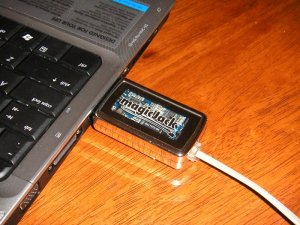 He has a MagicJack phone. It’s a voice-over-internet phone that doesn’t require a service provider. For a fee, you purchase the phone jack that you plug directly into your computer USB port and voilà – you have phone. But, the cool thing about it is that there is a web-based voice mail system. When I call his number, I can leave him a voice mail and he will receive it in his email as a .wav file.

It’s awesome. If I’m thinking about something and I’m driving, I can just give him a quick call and have a one-sided conversation. The kids call and tell him goodnight or good morning. If I want to just have some connection with him, I call and listen to his voice on the message then leave him a message.

It’s a small thing, but it adds such connectivity to our life. Something that we need with such a lengthy separation.