Chasing the Monsters Away 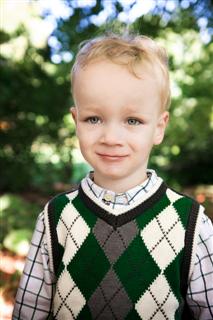 My son, Scott, is incredibly precocious.  What he can grasp at 3 often amazes me.  What he can remember just blows me away.  He’ll remember details from something from six months ago and still talk about it.  It’s awesome.

Yesterday, I was babysitting an older girl.  After I laid the boys down for a nap, I let her put on Spiderman 2.  Scott should have been napping and I was in the kitchen.  I came out of the kitchen during a very scary scene with Doctor Octopus.  Scott was glued to the television.

I knew there was going to be a problem last night.

This morning, when he came downstairs, he was talking about scaring the monster.  I was on a video conference with Gregg, so he bypassed me and went straight to Daddy.  He jabbered to Gregg for probably 10 minutes about this dream he had.

All day long he has talked about the scary monster or scaring the monster or swimming and getting swallowed by a big fish.  Finally, I realized that he would probably respond well to an old trick I used to do with Kaylee.

Kaylee used to have vivid dreams.  She would wake up absolutely hysterical and not be able to distinguish reality from dream world.  When she was about four, I started blowing into her ears.

We would pray, and part of the prayer would be an appeal to God to keep the bad dreams away, then I would cup both of my hands over an ear and gently blow, then do the same thing to the other side.  With her, I was blowing the bad dreams away.

Tonight while shopping with the boys, Scott kept talking about this monster and how he simply wouldn’t go to bed tonight and I told him he didn’t have to worry about bedtime because I’d just blow in his ears.  He seemed intrigued so I 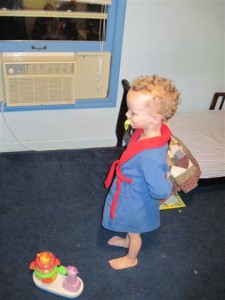 told him I’d blow the dreams away.

He’s still so young and cannot understand that his dreams weren’t reality.  So blowing the dreams away didn’t mean anything to him until he twisted it with his mouth and said that I would, “Scare the monsters away.”

“Where will they go?”

“Well, you have to blow my ears and blow my mouth and blow my eyes.  One, two, three, four, five.  Five monsters.”

I can do that.

So after prayers tonight appealing to God to help keep the bad dreams at bay, because let’s all be honest here – Mommy breath only has so much power, I blew into his ear, then into the other, then into his mouth, then into each eye.   One, two, three, four, five monsters have now been banished, never allowed into Scott’s head again.